Australia's two former World No.1s Adam Scott and Jason Day are in a fight for FedExCup survival after the opening round of the BMW Championship.

Scott, 38th on the FedEx standings, finished as the best of four Australians in the field with a 2-over par 72 and sits in a tie for 21st – five shots from the lead.

He needs at least a 17th placing at Olympia Fields but can lock up a place in the finale with a seventh-place finish.

Day's situation is much more precarious after a 6-over 76 left him in a tie for 60th place.

The 2015 US PGA Championship winner needs at least a top-eight result to climb into the top 30 who advance to next week's FedExCup finale in Atlanta, Georgia.

Fellow Australian Cameron Smith returned a 5-over 75 while Marc Leishman is at 10-over after a dismal round that included two double bogeys and six bogeys.

Hideki Matsuyama, who has gone three years since his last victory, birdied two of his last three holes to take the opening-round lead.

In one of the toughest tests of the year where it was clear that par would be a great score, Matsuyama made a 65-foot birdie putt on his final hole to finish with a 3-under 67.

The Japanese star leads by a shot from American Tyler Duncan.

Dustin Johnson, who won The Northern Trust last week at 30-under par, opened with a 71 and felt like it was a good day's work.

Tiger Woods needs to finish around fourth to have any hope of returning to East Lake next week in Atlanta to chase the $US15 million bonus for the FedExCup winner.

He was hovering around even par a few shots out of the lead but finished with three straight bogeys for a 73.

The average score was 72.8 and only four of the 18 holes played under par.

Rory McIlroy was among 10 players who finished at 70 and felt the day was a success.

He hasn't registered a top 10 since golf returned from the coronavirus shutdown in June, and he conceded to being lethargic without fan energy. 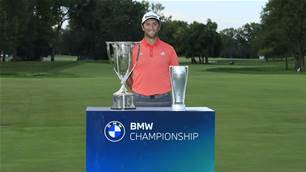