Aaron Baddeley admits it was extremely hard leaving his large family to return to golf after the longest break he's had since he toppled Greg Norman as a teenage amateur at the 1999 Australian Open.

Baddeley hasn't played competitively since March when the circuit was suspended due to the coronavirus but he's back this week for another shot at the RBC Heritage title at Hilton Head, South Carolina, where he won in 2006.

"It was a great three months and today was probably the saddest I've ever been to leave my family for a tournament," Baddeley told AAP.

The 39-year-old says the break was a blessing in disguise given wife Richelle gave birth to the couple's sixth child in February.

They named the baby boy Jedidiah, in keeping with the names of the couple's other children Jewell, Jolee, Jeremiah, Josiah and Jaddex.

Despite his four US Tour wins, which followed a stellar amateur career, Baddeley has often battled to retain his Tour card, forcing him to play almost year-round since turning pro in 2000 and successfully defending the Australian Open title.

“It's the first time I've really ever had three months off with no golf and no injuries, where I could just be a father and play with the kids and take them to their sports.” – Aaron Baddeley

"It's the first time I've really ever had three months off with no golf and no injuries, where I could just be a father and play with the kids and take them to their sports," he said.

Returning to Hilton Head's famed Harbour Town Golf Links where he earned his first US Tour title helped softened the blow of leaving his family in Arizona.

"I've got so many great memories playing at Harbour Town," Baddeley said.

"With narrow holes lined by trees, the course really demands all of your imagination and your ability to shape the ball both ways, which I love doing and have been practising the past three weeks."

Baddeley is joined in the field by fellow Australians Jason Day and Cameron Smith, who both missed the cut at last week's Charles Schwab Challenge, as well as Matt Jones.

It is the second event of the PGA Tour's return after last week's event in Texas.

"I take my hat off to (commissioner) Jay Monahan and the PGA Tour for coming back.

"You could only imagine the amount of work and meetings they've had since March," Baddeley said. 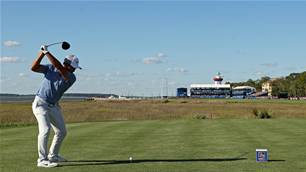