Justin Rose and Harold Varner III carded rounds of 63 to take the lead in the PGA Tour’s first tournament since the COVID-19 pandemic shut down the sport.

Englishman and World No.14 Rose was the clubhouse leader at the Colonial Country Club in Fort Worth until American Varner holed an 11-foot putt at the 18th to join him on seven under on Thursday.

Matt Jones is the best of the Australian contingent, shooting an impressive four-under 66. The Sydneysider's blemish-free round included birdies on the first, eighth, ninth and 15th and leaves him in a 10-way tie for 16th.

Marc Leishman, Cameron Smith and John Senden all shot 69 to be tied for 57th.

Two back-nine bogeys left Jason Day at even par and in a tie for 78th.

RIGHT: Varner's bogey-free round and an 11-foot putt at the 18th earnt him a share of the lead with Rose. PHOTO: Ronald Martinez/Getty Images.

Dustin Johnson did not enjoy his return to action as the World No.5 stumbled to a one-over 71 and carded four bogeys in a rusty round.

The event is the first on the PGA Tour since the Arnold Palmer Invitational in Orlando, Florida and the abandoned Players Championship in March, and has drawn a star-studded field to Texas.

Sixteen of the world’s top 20 ranked players are in action, with top-ranked Rory McIlroy's round of 68 good enough for a share of 39th.

Rose said a bit of luck on the opening hole had set him on his way as he overcame some wayward shots to birdie his first hole.

"I got some momentum," he said on Sky Sports Golf. "I didn't play particularly well on the first six or seven holes but the putter was really hot."

"I got into a nice rhythm and I could have maybe got in the clubhouse better but I rode my luck a little bit."

Varner's bogey-free round is a boost to his hopes of capturing a maiden PGA Tour victory but said he is staying focused on the present.

The PGA Tour observed a moment of silence at 8:46am in honour of George Floyd, who died in police custody after being pinned to the ground by a Minneapolis police officer last month for eight minutes and 46 seconds.

Varner, who went out in the afternoon, said he caught the moment on a TV at the gym before his round.

"I thought it was pretty cool," he said. 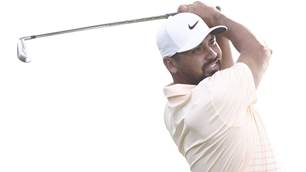