After shooting the lights out all week, Kevin Na has survived a back-nine blunder to win the Shriners Hospitals for Children Open in Las Vegas in a playoff against Patrick Cantlay.

Na (70) and fellow American Cantlay (68) tied at 23-under 261 before Na prevailed with a four-foot par putt at the second extra hole as Cantlay three-putted for bogey.

Na had coughed up a four-shot lead on the back nine, thanks largely to a triple bogey on the 10th.

Queenslander Cameron Smith charged home with a 65 to finish tied 13th at 17 under, while former World No.1 countryman Adam Scott had a shocker, dropping 34 spots to be tied 42nd after a 74 that included a quadruple bogey on the 3rd hole.

The 20-year-old Trent, a college player for University of Las Vegas, was set to do even better until he double bogied the last hole.

He was tied in a group including Sydneysider Matt Jones (70) while Aaron Baddeley (70) was a further shot back. 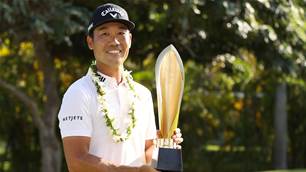