The Round of 64 got underway on Monday in the fog-delayed 40th U.S. Mid-Amateur Championship at Sankaty Head Golf Club, a windy day highlighted by the winnowing of the field to 64 players, with a dramatic eagle hole-out earning Hayes Brown the final spot in the match-play bracket.

The championship record nine-under-par performance by Yaroslav Merkulov from Sunday held up as more than half of the 264-player field completed stroke play on Monday at Sankaty Head and co-host Miacomet Golf Course.

Garrett Rank, an NHL referee and the runner-up in this championship in 2012, and Harvin Groft both posted 36-hole totals of seven-under to earn the No.2 and 3 seeds, respectively.

Defending champion, Lukas Michel of Victoria, missed the playoff for the final spots by four shots after finishing 36 holes of strokeplay at six-over. His second round 72 hurt by double bogeys at the par-4 10th and 18th holes. Six players parred No.10 to earn spots, while one was eliminated with a double bogey, and six were left to battle for the No.64 spot.

Brown spun a 58° wedge shot back into the hole from 96 yards to make an eagle on the 411-yard 15th hole and earn a matchup with No.1 seed Merkulov.

Merkulov led their match, 2-up, through seven holes when play was suspended for the day.

Groft, the No.3 seed, a 2008 graduate of Penn State University, is making the most of return to the game after nearly a 10-year hiatus.

The father of four, including a 4-week-old son, helps raise his family during the school year while his wife, Andrea, teaches high school Spanish. Groft also raises vegetables as part of an initiative begun by local chefs and farmers called the Heirloom Harvest Project, an unusual occupation for this field of competitive players.

“My wife is at home in the summer, which frees me up a little to play golf and she’s super-supportive of it,” said Groft, who returned to competition in the 2016 New Hampshire Mid-Amateur after a few months of hitting balls twice a week at a self-serve driving range near his home. “It was such a long break that I didn’t know where my game was, how it compared at a national level.”

Groft got a barometer for his performance when he qualified for the 2018 U.S. Mid-Amateur and missed the cut by just a few strokes. Most recently, he has been working on his mental approach with coach Scott Hacker.

“He’s helped me a lot with staying present, just enjoying the day and the challenge of each shot,” said Groft. “I’m a much better golfer mentally than I was back in college.”

Three Round-of-64 matches concluded on Monday, with No.17 Richard “Skip” Berkmeyer, No.33 Sam Straka and No.49 Josh Nichols earning victories. Nichols was the runner-up in this championship in 2017. 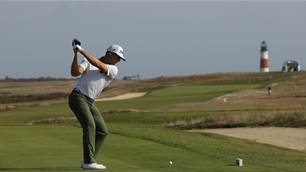 NHL referee and last man in advance at U.S. Mid-Amateur 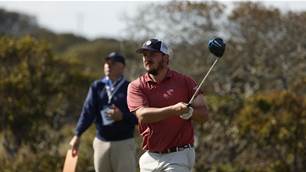 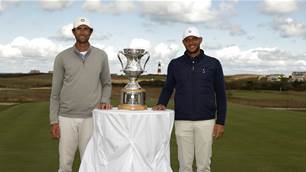