Growing up in a golfing family in Melbourne, Tony Cashmore was exposed to some of the best golf courses in the world. Alongside his two brothers and father, he regularly played on the famed Sandbelt and he came to admire the quality of the layouts. Then, throughout his teenage years, he would pencil sketch the strategy and visual aspects of holes at Royal Melbourne or Kingston Heath.

Years later, after graduating from university with a degree in architecture and working internationally as an architect, Cashmore began to specialise in golf course design. His big break came with the remodelling of The Dunes on Victoria’s Mornington Peninsula, which opened for play in 1997. The new course received wide acclaim, which led to him getting the task of designing the Beach Course at Thirteenth Beach. When it opened in 2001, the accolades continued for Cashmore’s work. Both courses, covering wonderful sandy terrain, had been carefully crafted, encapsulating the strategic influences of the great Sandbelt courses that had been embraced by Cashmore years earlier.

But long before these praised layouts had even found their way into his sketch pad, Cashmore had a growing number of layouts – complete designs and remodelling works – on his resume. While most of them were scattered across Melbourne, his first major design from scratch outside Victoria was McCracken Country Club, about 90 minutes’ drive south of Adelaide near Victor Harbor on the Fleurieu Peninsula.

While his creations at The Dunes and Thirteenth Beach cover the kind of wonderful golfing land that will always yield a terrific course, Cashmore had no such advantage with McCracken, where the dominant land feature is a large hill where the clubhouse and resort now offer sweeping views over parts of the golf course and the adjoining residential estates.

When Cashmore first examined the site, it would have been apparent early on that the key to making the routing work was to lead players away from the highest point on the property and minimise the number of times they had to make a hard climb to a green. In that regard he’s done a great job as there are only four holes – including the par-4 9th and par-5 18th – that require a decent hill climb.

Having opened for play in 1991, McCracken is considered among his earliest works (he has designed or redesigned more than 70 courses around the world during the past 30 years) but the quality of the design work at that stage of his career was already apparent.

McCracken certainly has some memorable holes and, as is the norm for a Cashmore course, some imaginative greenscapes. On land that was certainly not natural for golf, Cashmore has extracted as much as possible from the terrain, put his creative bent on it and the end result is a golf course that is fun to play as well as being challenging to the better player.

There are 14 lakes and ponds scattered across the property, and more than 72 bunkers to punctuate your progress on each hole. Cashmore’s use of these hazards is, in some cases, more cosmetic than strategic as the relatively wide fairways allow you to play well clear of trouble. That said, there are some holes where the best line of play into a green is hitting from right alongside a fairway bunker or water hazard.

There is great variety in the holes at McCracken. No two holes can be mistaken for another, which is always a positive with this writer because when there is variety, in length and character, it means you have to play a greater range of shots with different clubs. That, to me, equates to having more fun during a round because there’s nothing worse than reaching for the same club on every par-4 approach or every par-3 tee. There’s not a chance of that at McCracken. For example, the five par-3s measure between 135 and 186 metres and only two of them, the long 5th and short 7th, play in the same direction. On the day I played I used five different clubs, from a hybrid on the 186-metre 2nd into the wind, down to a 9-iron on the aforementioned 7th.

For mine, the back nine boasts some of McCracken’s best holes, with the duo of par-4s, the 11th and 12th, being particularly good.

The 374-metre 11th hole presents arguably one of the tightest drives you will face at McCracken. The tee sits next to a lake and you have to drive across the edge of the water towards a small scheme of bunkers on the right of the dogleg-left fairway. It is a long hit to find the sand here, especially from the back markers, but the ideal and more aggressive driving line is actually left of the fairway traps. While the left side is bordered by two more ponds, there is still more room down the left than you can see from the tee. This green, which is angled diagonally back from left to right, is best approached from the left, especially to avoid the bunker short right of the large putting surface.

The following hole is slightly shorter at 362 metres and doglegs to the right but the strategy here is similar. Stick to the left half of the fairway to leave an approach that won’t be impeded by the tall gum trees that flank the right edge of the hole on the final journey to the green. The left side of the green is well-bunkered, while a lake lies just a slight mis-hit away to the right.

Water doesn’t a play a role on my favourite hole on the homeward run. The 334-metre par-4 15th plays across the downslope of a hill that is covered with luxury homes off to the left.

The hole turns nearly 45° left but cambers markedly down to the right. The fairway at the corner of the dogleg is the widest expanse of short grass to be found at McCracken. If you happen to hit your tee shot into the bunkers on the inside corner here you have hit a terrible drive. However, you can’t hit too far right from the tee otherwise you will be hampered in your uphill approach by a lone tree. Imaginative Cashmore bunkering short and right of the undulating putting surface and small mounds left put the pressure on to make your second shot here a good one.

The bunkering at McCracken is the outstanding feature of the course. The sandy hazards vary significantly in size and shape, which, again, is part of the variety Cashmore has incorporated into this design.

After my most recent visit to McCracken I have certainly changed my opinion on the quality of the course. Having played the course several times during the past ten years, I never left the course really wanting to return and I can put this down to the layout being in poor condition on each of those occasions. While the design hasn’t changed at all over that time, when the presentation was less than satisfactory it was hard to see past the poor playing surfaces to appreciate the design.

I have travelled to McCracken twice this year and on both occasions the layout was presented way better than at any other time I have seen it since 2001. Having said that, there is always room for improvement and McCracken can get even better. The course finished just outside Golf Australia’s ranking of the Top-100 Public Access Courses in 2011 and how it will finish in 2013 is yet to be seen. But the potential is there for McCracken to cement a place deep into the Top-100 in future years.

CORPORATE DAYS and conferences: McCracken has a range of business, conference and meeting facilities coupled with luxurious surroundings. Any event planning can be done by the functions team.

ACCOMMODATION: The resort, which overlooks the course, offers stylish accommodation with a choice of superb hotel-style resort rooms, larger suites and self-contained, serviced apartments all featuring en-suite spa baths. The resort also has two self-contained villas (similar to a small holiday house), ideal for longer stays. There is a swimming pool, sauna, spa and gym on site. PACKAGES: Grab your mates and take advantage of a special $99 per person, per night, deal staying in a self-contained apartment, fully cooked breakfast in the clubhouse and a round of golf each (based on four people sharing a two-bedroom or six in a three-bedroom apartment). Offer ends on March 31, 2013. 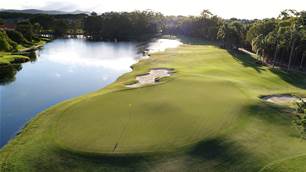 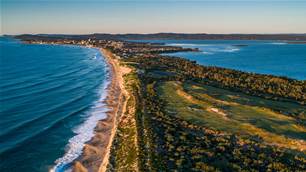 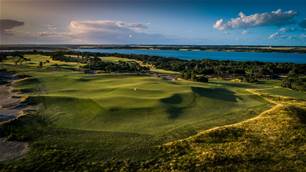