Brooks Koepka chipped in from 32 yards for eagle on the 17th hole to break a tie for the lead and then parred the last for a one-stroke victory in the Waste Management Phoenix Open.

Five strokes behind Jordan Spieth and Xander Schauffele entering the final round on Sunday, Koepka shot a six-under 65 to finish at 19-under 265. The four-time major champion also won in 2015 at TPC Scottsdale for the first of his eight PGA Tour titles.

The two-time US Open and US PGA Championship winner missed three consecutive cuts before arriving in Arizona.

"I felt like I have been playing really well," Koepka said on the NBC broadcast.

"I loved the way I have been playing, even though I was missing cuts. It came down to scoring. I felt like I was playing well all week and knocking on the door and today I just stayed patient."

On the 334-yard 17th, Koepka hit a fairway wood 305 yards to short and left of the green, then holed out to the largest roar of the day from the crowd limited to 5,000 a day – a fraction of the usual size but the most on tour during the COVID-19 pandemic.

"Just being around fans is something else. I love it. I've played my best golf with fans, so just need to find something when they're not there."

"I felt like I was playing well all week and knocking on the door and today I just stayed patient." – Brooks Koepka

Back at full strength after lingering left knee and hip problems, Koepka rebounded from a bogey on the 2nd with an eagle on the par-5 3rd and birdied holes 13 to 15.

"It's been very humbling," Koepka said about overcoming his injuries.

"I didn't know if I was ever going to be the same again. My (left) knee just didn't feel the same as my right one. I was in some dark places, I'm not going to lie."

Steve Stricker, the 53-year-old US Ryder Cup captain who was trying to become the oldest winner on the PGA Tour, shot a 67 to tie for fourth with Spieth (72) and Mexico's Carlos Ortiz (64) at 17 under.

Australia's Matt Jones finished in a tie for 30th after shooting a three-under 68 to finish 10 under.

Spieth and Schauffele struggled from the start, with Spieth bogeying the 1st hole. They each had two bogeys on the front nine, with Schauffele making the only birdie between the two on the front side on No.9.

They each drove into the water on 17 to end their chances, then both birdied 18.

James Hahn, three strokes ahead in the middle of the round, bogeyed four of the last eight holes to finish 10th at 15 under. 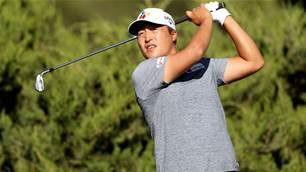 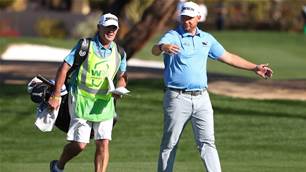