Queensland's Becky Kay will begin her professional career when she tees off at the Gary Player-designed DLF Golf and Country Club in New Delhi tomorrow in the opening round of the Hero Women's Indian Open.

The 20-year-old, who is playing this week on a sponsor invitation, took the plunge into the professional ranks less than a month ago after successfully advancing to the second stage of the LPGA Tour's Q-school in August.

Kay is guaranteed at the very worst a number of starts on the LPGA's developmental tour, the Symetra Tour in 2020, with the prospect of starting the 2020 season with an LPGA Tour Card if she can negotiate the second stage in mid-October and then the LPGA's Q-Series, formally known as Final Stage in early November.

Kay said she was "super excited for this next chapter" of her golfing career to begin.

"I’ve had quite a successful amateur career and I’m super grateful for everyone who has helped me get this far, but I feel I’m ready to jump in the deep end," Kay said.

"I feel it's been a long time coming ... since the age of 13 I have been in Golf Australia and Queensland Academy of Sport programs and I've had so much support which has made these goals attainable. "I've been very lucky to have had experiences in professional events with the help of both Golf Australia and the ALPG and I think the time is now right.”

Of the other Australians in the field this week, a resurgent Whitney Hillier comes into the event brimming with confidence after a couple of solid results behind her in recent weeks.

The West Australian finished in a tie for 26th at the Lacoste Ladies Open de France two weeks ago and then tied for 7th at last week's Mediterranean Ladies Open.

Hillier will tee off at 6:55am local time.

Kiwi Hanee Song will also be hoping for another good week after a solid 2019 season competing on the China LPGA Tour, she tees off at 8:15am.

This year marks the 10th anniversary of the Hero Women's Indian Open, which will be played over 72-holes from October 3 – 6 at DLF Golf and Country Club in New Delhi. The tournament is sanctioned by the Ladies European Tour and the Women's Golf Association of India.

Becky Morgan from Wales is the defending champion. 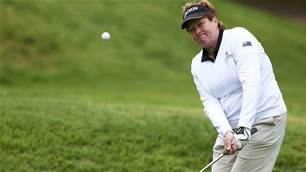