Congratulations on becoming the oldest golfer to have made the cut at the Masters. You must be proud that at 63 you are still setting records.

Yes, I am a little bit to tell you the truth. When you think of all the legends who have played this tournament – guys like Gary Player, Arnold Palmer, Jack Nicklaus, and on and on – and so for me to be the oldest golfer to have made the cut means a lot.

I saw Tommy Aaron at the Past Champions Dinner on Tuesday. I told him that his record of making the cut at 63 is an impressive achievement but I warned him that I was coming after it, and that I had a chance this week. He laughed and wished me luck, and here we are. I have known Tommy for more than 30 years because of the Past Champions Dinner and because he kept on competing for many years. He is a gentleman of the game and he has always treated me very well. We have respect for each other.

Does it feel as if the last couple of days have rolled into one Masters marathon?

It does. My first round was delayed so I did not tee off in on Thursday until around 3pm, so I have literally played 36 holes in a span of 24 hours – on a very wet and hilly golf course. I was pretty tired after my second round.

I had to get up at 4am this morning so I tried to go to bed at 9pm last night, to get about seven hours sleep, but 9pm is earlier than I usually go to bed so I was a bit restless. I was not very happy when that alarm went off!

You shot 68 in the first round – your best Masters round since 2001. What pleased you about your round?

I drove the ball well, I putted well and my short game was pretty good. When I missed the green most of the time I chipped the ball pretty close to the hole. If you can putt well and keep the ball in play with the driver then you can get the ball around this golf course. I didn’t make many mistakes in the first round and I made a few birdies which was nice.

Your last hole on Thursday evening was Augusta’s first hole. That was your 10th hole of the day and you birdied it in semi-darkness …

The first hole is very long. I had to hit driver and a two-hybrid yesterday, and then I made a putt of around 25-feet for the birdie. Then I finished the round well this morning, which was particularly pleasing because I was playing the front nine and I think it is a bit harder than the back nine.

“DeChambeau says Augusta is a par-67 for him. The problem is that he still needs to hit it straight and make the putts and he hasn’t done that yet this week.” – Bernhard Langer

With the Friday sunshine and breezes did the greens quicken up during your second round?

They might have been a little bit quicker this morning at 7:30, and they were very smooth first thing in the morning, but then they tend to slow down a bit in the afternoon.

I was a little more up and down in my second round, not quite as solid or consistent as. Finally I bogeyed the final hole to finish one over par but it was still not a bad round.

There is a fascinating leaderboard overnight. Does anyone there grab your attention in particular?

There are a lot of guys up there. Dustin Johnson might be the favourite at this point but it is hard to tell when you have a leaderboard that is so packed in. It might get even closer when the third round finishes tomorrow morning. Tiger Woods is still there but there are many others, many great champions, and they all know the golf course and most of them hit the golf ball very long.

The one surprise to me is Bryson DeChambeau, who I saw was two over par. He is in danger of missing the cut.

What do you make of Bryson DeChambeau’s powerful game?

DeChambeau’s game seems to work for him. He has given it a lot of thought. He won the US Open when he just over-powered the golf course. Even when he drives into the rough he can just gauge the ball out of there with a wedge or a nine-iron and reach just about every par four, even if it’s 500 yards. He hits his drives something like 340 yards. It’s a different game.

I played nine practice holes with him in Texas at a PGA Tour event over the summer and he was very impressive. He took these lines off the tee that went over trees and he went for greens that most guys would not even think of. He is making big waves and DeChambeau has taken driving distance to a whole new level.

In terms of distance, DeChambeau says Augusta is a par-67 for him. The problem is that he still needs to hit it straight and make the putts and he hasn’t done that yet this week.

This Masters is also unique as you are driving yourself to the course, whereas at many top events you have a dedicated driver. Which do you prefer?

Wow, this is hard to say! I guess being driven and being the driver are both pretty perfect. Since I very much like driving just on my own and using all the little features in the new Mercedes-Benz S-Class, I definitely would go for the driver’s seat if I had to choose. 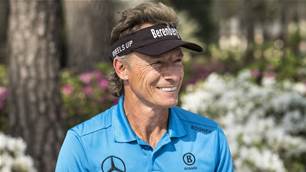