The popular BNI Indonesian Masters supported by Bank BRI and MedcoEnergi is poised to serve another exciting week of world-class golf when it returns to the Asian Tour for its ninth edition from December 12 to 15, 2019.

The highly rated US$750,000 event will feature more than 50 Tour champions, including seven Asian Tour Order of Merit winners, when it gets underway at its traditional home, the Royale Jakarta Golf Club, next month.

Defending champion Poom Saksansin of Thailand is set to return to his winning ground and take aim at completing a hat trick to match Lee Westwood’s record in the tournament, which was incepted in 2011.

American John Catlin will also be making his fifth appearance in the BNI Indonesian Masters alongside Order of Merit leader Jazz Janewattananond and Pavit Tangkamolprasert of Thailand, as well as Korean youngster Joohyung Kim, all winners on Tour this season.

Rory Hie, who became the first Indonesian to win on the Asian Tour in September, will spearhead the local charge when he tees up against the elite field, which also features Miguel Carballo of Argentina, Yosuke Asaji of Japan and Miguel Tabuena of the Philippines.

The BNI Indonesian Masters will form the third leg of the 2019/20 Panasonic Swing and the winner of the event will again receive a coveted spot in the World Golf Championships – FedEx St. Jude Invitational in 2020.

“Indonesian Masters is the only event I have played every year since I came to Asia in 2015. I love the course. It’s such a great test of golf. I am looking forward to playing it again,” said the 29-year-old Catlin, who clinched his fourth Asian Tour title in Thailand three weeks ago.

“Indonesian Masters is the only event I have played every year since I came to Asia in 2015. I love the course. It’s such a great test of golf.” – John Catlin

“The year has been amazing. Playing against the best players in the world and traveling all over the world has been great for my game. I have been tested and realised certain areas of my game that need to be improved. Very excited for what the future has in store,” added Catlin.

By being the flagship event of the Asian Tour, the BNI Indonesian Masters will award the winner with no less than 20 Official World Golf Ranking (OWGR) points, ensuring more players benefit from the points breakdown in what will be the penultimate event of the 2019 season.

Other notable players set to tee up for the 2019 BNI Indonesian Masters include American Julian Suri, Queenslander Scott Hend, who sits in second place on the Merit rankings, as well as Taehee Lee of Korea and Thai veteran Prayad Marksaeng.

Poom fended off the challenges from his more illustrious rivals to win the Indonesian Masters by three shots for his third Asian Tour victory last year. He had won by five shots for his first Asian Tour win at the same event in 2016.

Poom is the second player following Lee Westwood to win the event more than once. Lee had won the event for a record three times in 2011, 2012 and 2015. Austrian Bernd Wiesberger triumphed in 2013 while Anirban Lahiri of India emerged victorious in 2014.

Justin Rose of England claimed his third win in seven weeks at the 2017 Indonesian Masters after he recorded a commanding eight-shot victory with an impressive four-day total of 29-under-par 259. 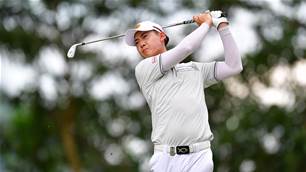