England’s Paul Casey knows he has to overcome the strong Asian challenge to stand a chance of winning the SMBC Singapore Open which starts at the Sentosa Golf Club on Thursday.

The World No.24 is the highest ranked player in the elite 156-man field and knows that Asia’s best players will pose a significant threat to his bid of winning Singapore’s National Open, which is the season-opening event for the Asian Tour and Japan Golf Tour Organisation (JGTO).

“I believe there has been a constant kind of curve on the way up in terms of how many guys we see playing world class golf from Asia now,” Casey said. “It feels like it used to be just a number you could count on one hand, sort of key names. But its dozens of guys, and guys I’ve never heard of right behind them who are about to take our place. I’d love to see the numbers on it but it’s certainly been a swell, and it’s something the world has taken notice of.”

The 41-year-old Englishman may hold 18 professional victories worldwide but having witnessed the rise in Asian golf over the last decade, he is under no illusions that it will be a stroll in the park at this week’s US$1million event.

“This is a golf course that I remember really thoroughly enjoying playing and (has) the types of grass I like to play on. I recall it being very windy so touch wood it is not going to be that way this week,” Casey added. Spain’s Sergio Garcia is relishing the opportunity to defend his SMBC Singapore Open title. He lived up to his star billing when he cruised to a five-shot victory last year and enjoyed a rich vein of form towards the end of 2018 where he secured one win and four top-10s in his last five starts.

RIGHT: Casey will be hoping for a better showing after missing the cut last week in Hawaii. PHOTO: Sam Greenwood/Getty Images.

“It feels good to be back. It is a course I love playing, a wonderful golf course, and to be here as champion is always special,” Garcia said. “It was a good off season. A little bit of rest - which was nice after a very hectic year – and I started practicing a couple of weeks ago. There is still a little bit of rust in there but hopefully I will get it off in this heat.”

England’s Matthew Fitzpatrick is hoping to shine in his maiden appearance at the SMBC Singapore Open.

Fitzpatrick first came to Singapore as a nine-year-old on a family holiday and is back after more than a decade, hoping to challenge for his first win on Asian soil this week.

“The course is in fantastic condition and I am really looking forward to the week. I got back to work after the off season and have been practicing for five weeks straight trying to get into shape so I can compete with these guys (Garcia and Casey) a little bit more. I have not played too much in Asia but I have played two EurAsia Cups,” Fitzpatrick said.

Thailand’s Danthai Boonma also returns to the Lion City which has brought him much success over the years. He earned his Asian Tour breakthrough in Singapore in 2015 and was also rewarded with a ticket to The Open after finishing tied for fourth at the SMBC Singapore Open last year.

“I like this golf course a lot and I like Singapore too,” Boonma said. “I’m hoping to repeat what I’ve done from last year and maybe do even better.” 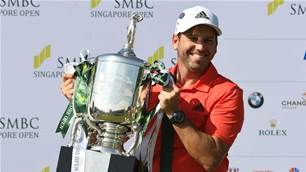 McIlroy endures a nightmare start to his Players defence