Australian amateur Lukas Michel hopes rolling his sleeves up and digging trenches on golf courses in Detroit has toughened him up for a US Open debut at New York's notoriously brutal Winged Foot course.

Melbourne native Michel, who has endured a tumultuous year due to COVID-19, has spent the past month practising in Detroit preparing for his major championship debut at this week's US Open outside New York City.

But when the 26-year-old engineering graduate and budding course designer hasn't been on the fairways of Bloomfield Hills CC, he has been helping popular golf architect Mike DeVries renovate the Detroit course.

"You can't practise all day," Michel told AAP. "Mike is on a bulldozer from 7am to 7pm, so I've been able to watch and when I've finished practising I've grabbed a rake or shovel and helped out with some of the smaller tasks.

"Occasionally, he lets me jump on the bulldozer."

Golf course design is a career path Michel is considering if golf doesn't work out.

Australian designer and former tour pro Mike Clayton has employed Michel as a junior consultant at his firm.

Michel won last year's US Mid-Amateur to earn invitations to this year's US Open and Masters, but that delayed turning professional in order to utilise starts in the two major championships.

Then, COVID-19 threw a spanner in the works.

“This is the big one; the one I've been waiting for for a long time.” – Lukas Michel

Michel was in the US in March, preparing for April's Masters when that, and the other three golf majors, were either postponed or cancelled.

He had to return to Australia and quarantine, enduring Melbourne's lockdown and moratorium on golf.

"It's been challenging and I've had to reconsider my career options," Michel said.

"Turning pro won't be easy with travel restrictions likely for a couple of years and, with a drop in sponsorship money, there won't be as many playing opportunities."

Michel finally returned to the US in August to play the US Amateur Championship as a dress rehearsal for his long-awaited major debut at the US Open.

"This is the big one; the one I've been waiting for for a long time," Michel said.

"It's going to be an incredible week. I'm a golf course architecture lover and Winged Foot is one of the best courses in the world."

Michel watched fellow Melbourne native Geoff Ogilvy win the 2006 US Open at Winged Foot with a 72-hole score of five-over-par as golf great Phil Mickelson imploded on the final hole.

"I watched Geoff win when I was 12 years of age and that was inspirational," Michel said.

"It is one of (architect) AW Tillinghast's best courses and to see it set up for a major is going to be incredible to see and play." 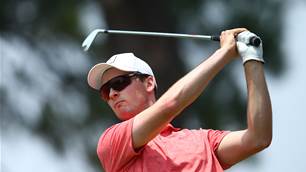