From the moment you drive through the gates and ease your way up the long driveway to the clubhouse, you can’t help but be struck by the splendour of the golfing landscape and its surrounds at The Eastern Golf Club.

Built on the southern banks of the Yarra River and with the tree-blanketed valley wall of Christmas Hills and the Dividing Range as dramatic backdrops to the north and north west, Eastern is simply a beautiful place to play golf.

You can be standing anywhere out on this course and feel a long way from the hustle and bustle of the city and suburbs. Truth is, all of that is just down the road, which is where the roots of The Eastern Golf Club lay.

Back in 2008, Eastern’s membership voted in favour to sell their suburban course to developers and relocate to Yering, the heart of Yarra Valley wine-country some 30 minutes’ drive away.

With a significant amount of money to spend, Greg Norman was commissioned to transform its stunning new tract of land into something infinitely more impressive than its previous home of 84 years. 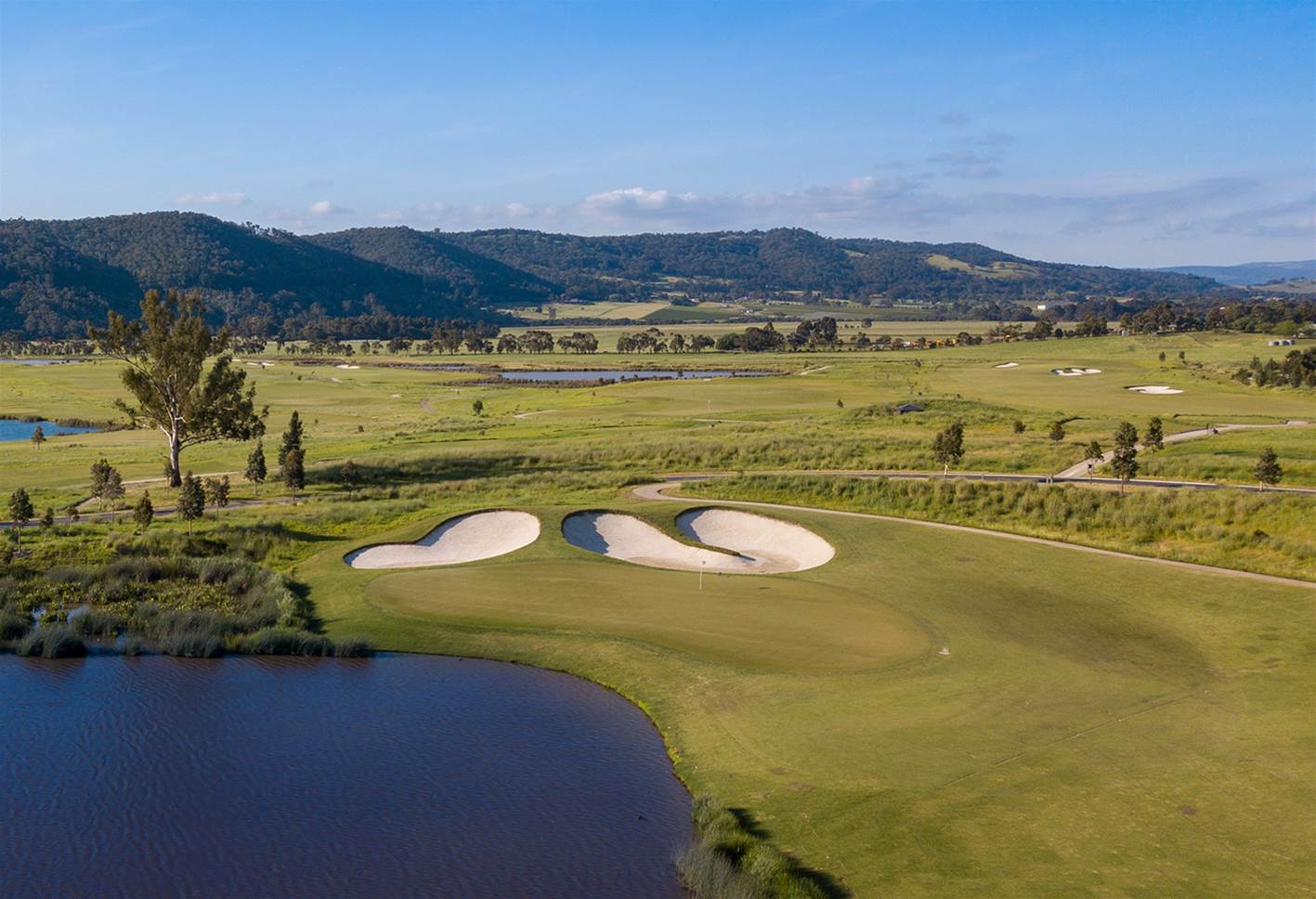 Norman and his team were impressed by the beauty of the Yarra Valley surrounds and, as a result, earmarked the site for the clubhouse to take full advantage of elevated views across the course and onto the ranges.

With the clubhouse at its core, Norman set about gently unfolding the layout onto the rich flood plains in every direction, taking advantage of the property’s natural undulations. Other areas were raised during construction to protect the course during long periods of heavy rainfall and potential flooding … more about that later.

From vote to opening day, it took seven years before Greg Norman officially opened the new $70 million Eastern, which today boasts 27 holes, as well as one of the best par-3 courses in the country.

And the connection to ‘The Shark’ continues. The tee markers (there are five sets on each hole), are cut in the shape of Norman’s famous Shark-brand logo. There’s even a shark fin emerging from the water in the lake left of the 1st tee of the par-3 course, known as Shark Waters.

There are three 18-hole course combinations across the 27 holes. There is the South Course (1-18), North Course (10-18 and 19-27) and the East Course (19-27 and 1-9). The South and North both featured in Golf Australia magazine’s Top-100 Courses ranking published in 2020. The Shark Waters par-3 nine is laid out between vast tracts of wetlands between holes on the North Course. 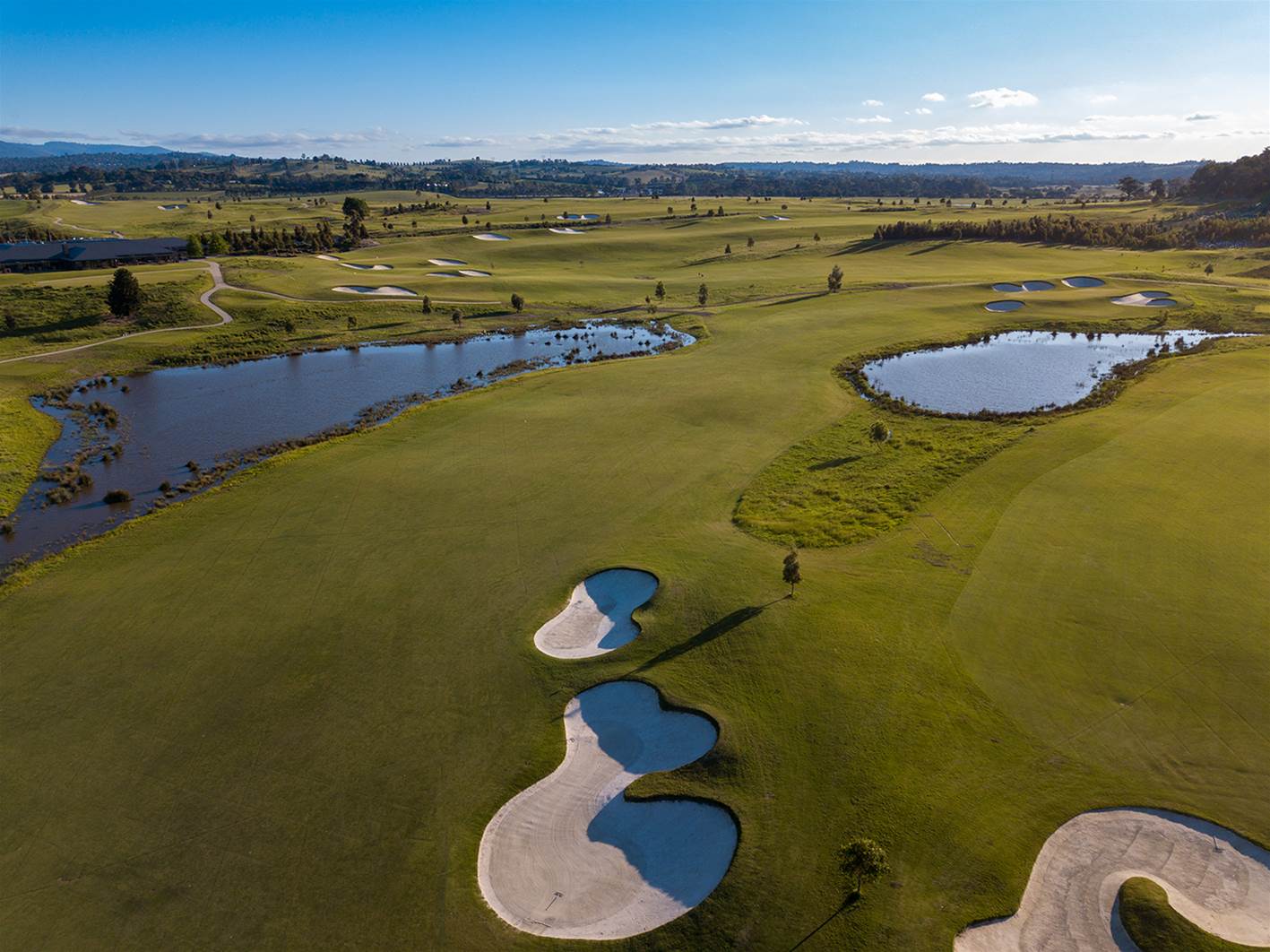 Water and sand line the par-5 14th hole, but there is plenty of room to avoid both. PHOTO: Brendan James.

The beauty of the setting aside, Norman’s creation perfectly straddles the line between challenging and fair. Putting a premium on strategy to keep your score down, rarely are you excessively penalised for taking on the course, which is common for Norman-designed courses. There are well thought out bailout areas – particularly around the greens – as well as few places where you’re likely to part company with a ball after a slight mis-hit.

As Norman has proven with other Australian designs he has been involved with – including the Moonah Course at The National Golf Club, Ellerston, Cathedral Lodge and The Glades – there is a genuine flair for visualizing and then creating interesting, fun par-3 holes. It’s no different at Eastern where there is a superb collection of one-shotters across the two 18-hole layouts.

The 176-metre 13th is particularly memorable. A solid tee shot is needed to ensure you carry the huge beach bunker wedged between the edge of the angled green and a lake. The pin position here can really change your perceptions of the hole, especially when the cup is cut near the front of the green.

Similarly at the 163-metre 17th (where Norman hit the course’s maiden shot), an elevated green and bunkers short and to both sides make the putting surface appear smaller than it is, with ample landing areas to either the left or right if you take on the flag but stray wide.

For pure aesthetics it was hard to go past the 9th and 18th holes, which feature tee areas at the foot of the Dividing Range, with sweeping views over the entire course and over the surrounding farmland towards Lilydale and Coldstream. Both holes take advantage of a right-to-left sloping bowl, presenting a choice to either funnel your ball down the slope and be faced with a much shorter (but more challenging) second shot up a significant elevation, or play it safe out to the right and maintain your commanding position above the hole, albeit with a longer shot in.

Since the North and South Courses debuted in this ranking in 2018, significant work has been carried out to keep improving the still young layouts. Much of that work has centred around drainage as a result of its proximity to the Yarra River and the potential for flooding.

This potential for inundation was seen first-hand in 2017 and again just a few months ago. In the time in between, additional drainage work to that completed during construction was undertaken.

“The majority of the drainage is now complete,” Course Superintendent Jay Infanti said. “We’ve now installed about 130km of drainage and we’ve purchased the machinery to do the remainder in-house, which we’ll chip away at without inconveniencing the members.

“So, all that drainage is pretty much filled in and grown over and is performing well. You can’t really notice it now, which is good. That’s been one of the biggest changes over the past 12 to 18 months.” 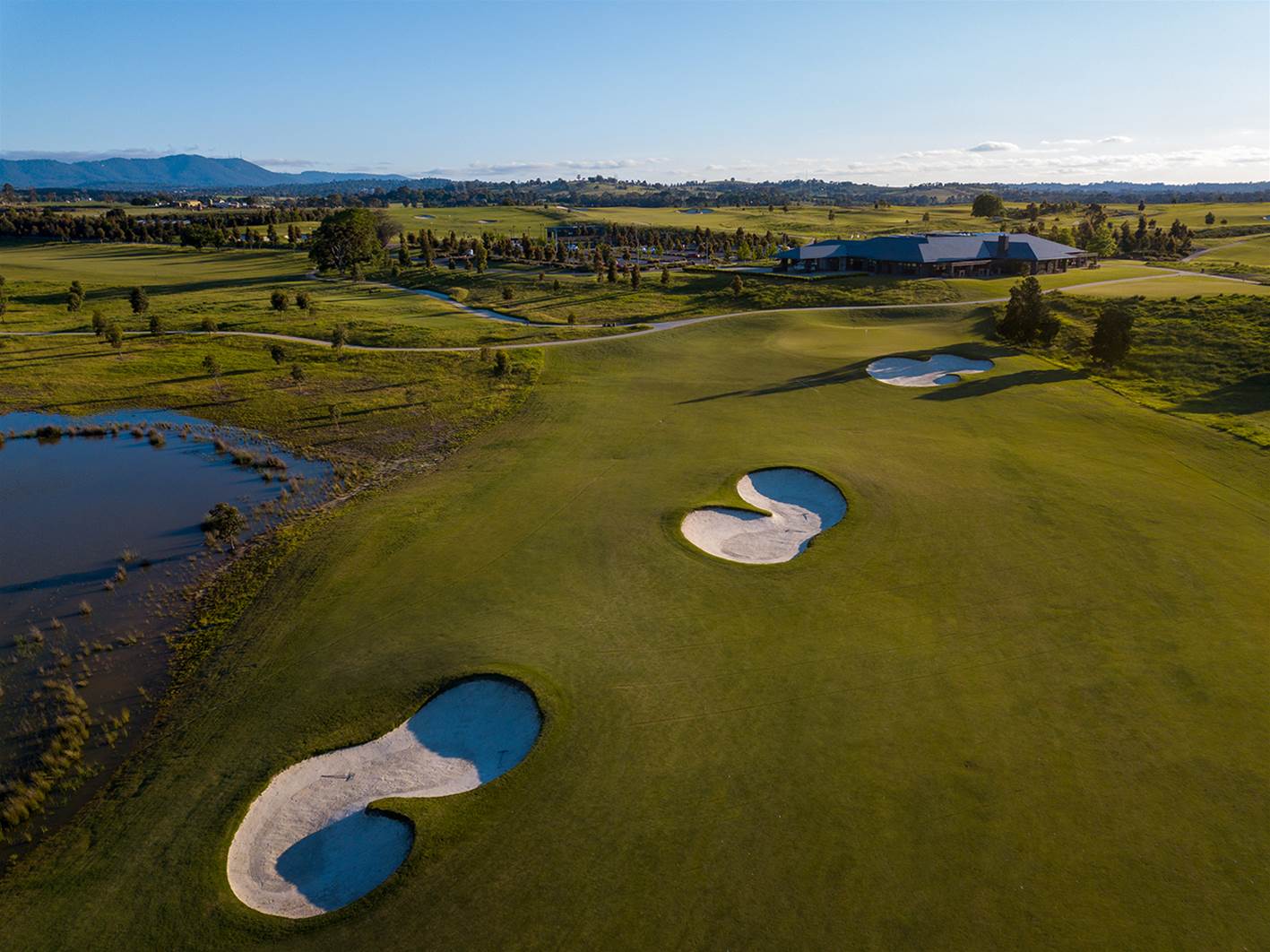 Take on the staggered fairway bunkering with your drive on the par-4 27th, for an easier approach shot. PHOTO: Brendan James.

The heavy flooding of sections of the course earlier this year – when 14 holes were completely submerged – put the new drainage to the test and it came through with flying colours.

“There was no real clean-up work to do and areas of the course that had been drowned under floodwater were back in play a week later, which is a credit to the course design and the drainage work that has been done,” Infanti said.

Infanti and the club’s resident horticulturalist, Bivek Inderjeeth, have also overseen a tree planting program during the past two years to fill out various parts of the course.

“Covid lockdowns kind of helped us with that,” Infanti said. “We’ve put in another 15,000 plants in the last two winters, so our landscape features are really starting to shape up well now.

“We’ve planted all native indigenous plants to the area, and using the plants best suited to our micro-climates across the course as we have high and low areas that best suit different plants.”

The high quality of the environmentally sustainable course work being carried out at Eastern was recognised in 2019 when Inderjeeth was awarded the prestigious Claude Crockford Environmental Award by the Australian Golf Course Superintendents Association.

It’s still early in the life of The Eastern Golf Club in the Yarra Valley. But with a club centenary fast-approaching in 2024, it would seem the foundation has been laid for its finest days to come.

GREEN FEES: As a private member club, golf access is limited to members of The Eastern Golf Club or accommodation guests of Yering Gorge Cottages, green fee of $95. International and interstate visitors, who are members of a golf club, are welcome to enquire about visitor tee times, which are available Sunday to Tuesday, Thursday and Friday. Green fee of $150 per round.

MEMBERSHIP: The club has advised that all five-, six- and seven-day golf membership categories, together with Shark Waters membership, are now at capacity and all new applications will be placed on a waitlist.

ACCOLADES: The South Course was ranked No.54 in Golf Australia magazine’s list of the Top-100 Courses in the country in 2022. The Eastern’s North Course was No.84 in the 2020 ranking.