The iconic Gold Coast club recently celebrated the 10th anniversary of the reopening of its Palms Course after an $8.8 million rebuild.

In a career spanning four decades, Ross Watson designed or remodelled more than 80 courses throughout Australia and Asia. Whether it was in partnership with former touring pro Graham Marsh or as head of his own design firm, many of his creations – like The Vines, Terrey Hills, Magenta Shores and Pacific Harbour – have become well regarded and won wide acclaim in ranking lists.

Watson is undoubtedly proud of each of the aforementioned projects.

But his extensive redesign of Sanctuary Cove’s Palm Course, which opened for play in 2011, is perhaps the work he is most proud of in his lengthy design career.

“I got more out of this site than any other I have worked on in Australia or overseas because I was able to control every aspect from the design through to the construction. As a result, I put so much more time into the project,” Watson said in an interview with Golf Australia magazine on the eve The Palms Course reopening for play.

“I regard this as a masterpiece because I was the designer, the landscape architect and the contractor all rolled into one. Basically, I had to deal with a committee of one and that committee was on the same page as me every time.” 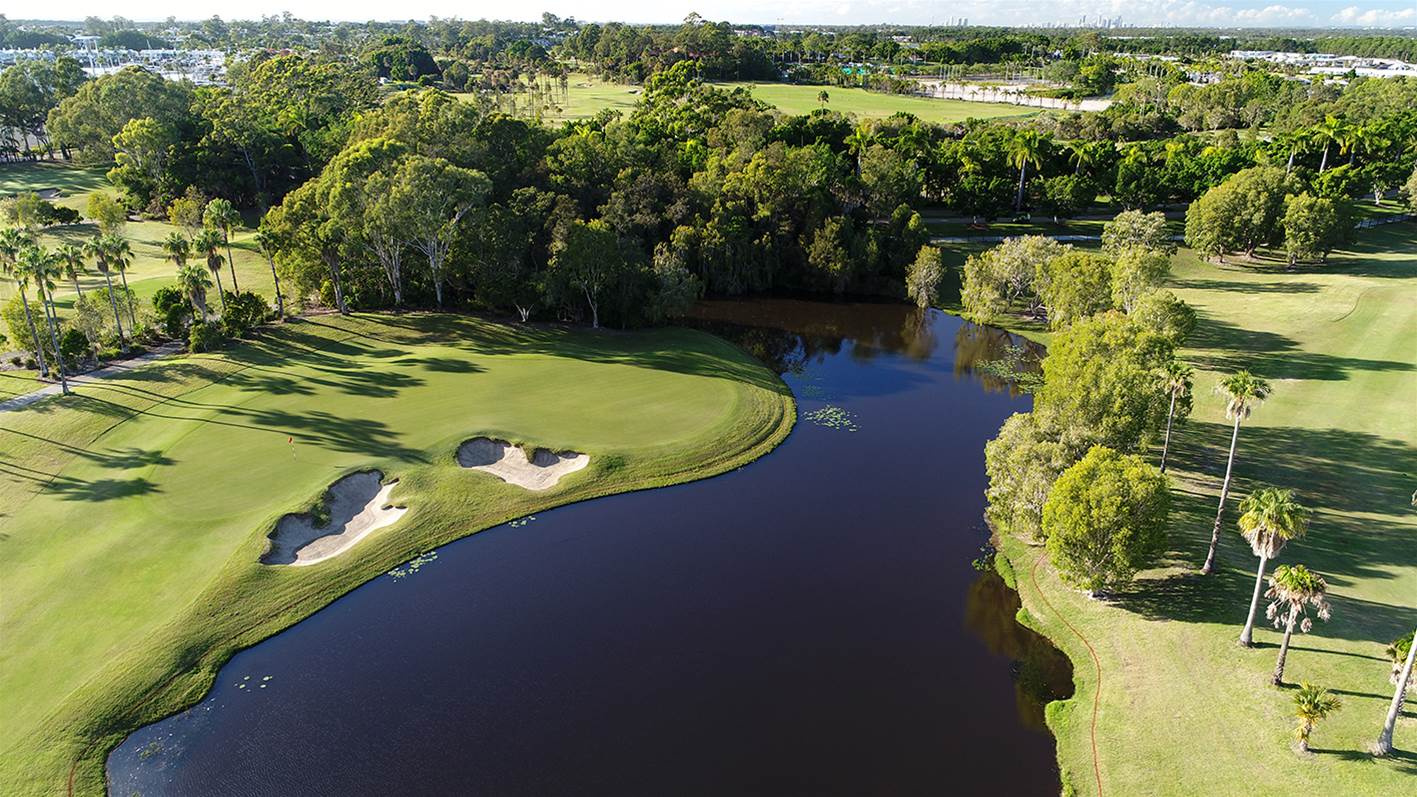 water comes into play on each of the palms’ one-shotters. this is the downhill 13th. PHOTO: Gary Lisbon.

Watson’s $8.8 million reconstruction of The Palms Course was carried out in three stages, with the current 9th and 10th holes being built first on land that was not part of the original Palms course, designed by the late Fred Bolton, and opened for play in 1988.

With all due respect to Bolton, Watson extracted the best possible golf holes from the land working within the confines of the surrounding residential community and the numerous lakes and water hazards that cover the property. The result was a fantastic addition to the already rich golfing Gold Coast landscape.

Today, The Palms Course rightfully stands alongside its neighbour, The Pines, as one of Australia’s best courses. It is ranked in Golf Australia magazine’s Top-100 Courses and was recently listed at No.46 in Australia’s Top-100 Public Access Courses. 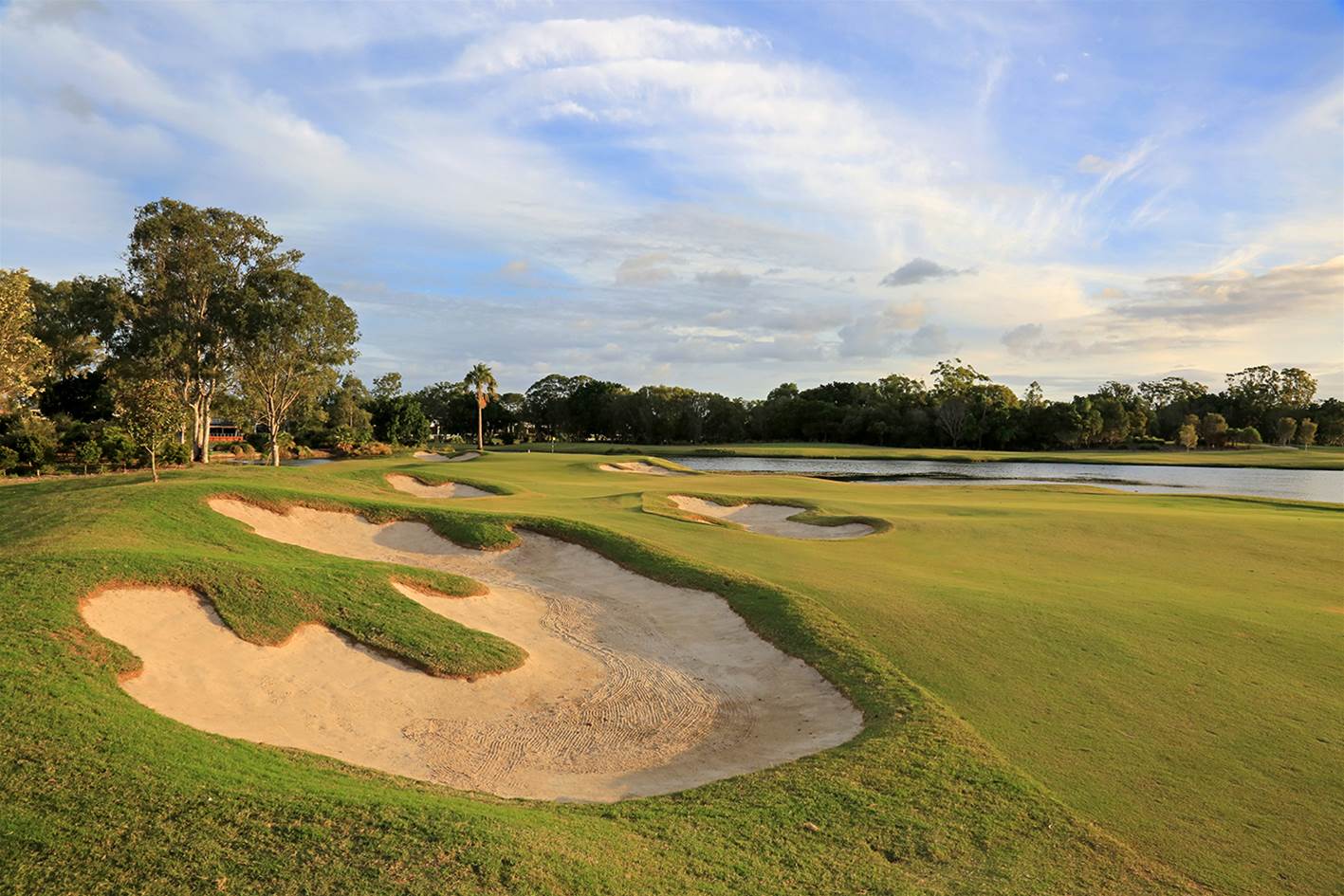 “Ross Watson’s redesign dials up the strategy with some fine risk and reward challenges – the kinds of greens that take some learning and fun use of water around the middle of both nines,” was the summation of Top-100 judge Scott Warren.

And this from fellow panellist, Tristan Holmes: “The Palms layout just keeps getting better and better in my opinion. The redesign is so much better than the original, with more interesting green complexes and strategic questions asked on most holes. Depending on the tee you’re playing, it is a fun course for good as well as not-so-good players.”

I couldn’t agree more. Watson’s green complexes influence the way you strategise to play each hole, whether it is from the tee, fairway or even around the putting surfaces.

At 5,904 metres from the back markers, The Palms is relatively short for a modern layout. However, that does not make it any less challenging but golfers may find it more fun as the demands here are more about accuracy and strategy rather than strength and length. a high-quality approach is needed on the par-4 8th, with water and sand well in play. PHOTO: Gary Lisbon.

Good shot placement is paramount when you consider Watson’s undulating greenscapes, which are a far cry from the relatively flat putting surfaces that were once common-place on the Palms Course.

Putting is also a real test of nerve and skill. That said, if your approach shots come to rest on the wrong level or section of a green, in relation to the flag, on any of the 18 greens here, you face the likelihood of a three-putt. The undulations across many of the Bermuda Tifeagle putting surfaces are dramatic but the greens are large enough to accommodate these slopes.

A standout feature of Watson’s Palms design is the bunkering. He adopted a natural, wilder look with his bunkering, which certainly sets it apart from anything else to be found on the Gold Coast but is similar to his creations at Pacific Harbour and Magenta Shores. Native grasses have also been used to surround many bunker schemes and further enhance the natural appearance. For mine, the most memorable holes are from the short dogleg left par-4 12th through to the par-5 18th. Water dominates most of these holes, especially on the two par-3s – the 173-metre downhill 13th and the well-bunkered 16th. Both demand a tee shot to be played over the edge of a lake and in both instances accuracy and good club selection are required to avoid a bogey or worse.

Arguably one of the Palms’ toughest offerings is the downhill 360-metre par-4 15th, which covers what was the 14th hole on the original course. Watson lengthened the hole and moved the tee to the right to a slightly less elevated position. This brings the lake – flanking the entire right edge of the rippled, dogleg right fairway – into play from the tee. The left half of the fairway is the obvious ‘safe line’ but this leaves a much longer approach into a green that is wedged between schemes of bunkers left and right, while the lake is never far away either.

The par-5 18th hole is 472 metres from the tips and offers a great chance for a closing birdie. The reward, for taking the risk of driving alongside the bunkers on the right edge of the fairway, is an easier angle of approach for an attempt at the green or a layup short. Long hitters will be tempted to go for the green over the small greenside lake, while the conservative play is a layup to the right to leave a wedge across the water to the small-tiered green.

Watson’s Palms Course is a gem. I found it challenging and a whole lot of fun, particularly the second time around when I could aim to leave myself easier putts on the greens by playing from the best spots back down the fairway.

Membership also provides access to the country club, which boasts a state-of-the-art gymnasium, over 45 fitness classes per week, specialist treatments, a kids’ club, function rooms and Arnie’s Café and Bar. 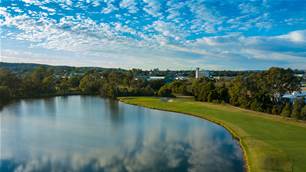