“Golf courses can’t be boring. If a course is boring golfers won’t come back. To capture that sort of repeat business, you need to build golf holes that are seared into people’s memories, and Barnbougle has those in spades.” – Tom Doak.

Doak – one of the world’s best golf course architects and the co-designer of Barnbougle Dunes alongside Mike Clayton – is 100 percent correct. Nearly 22 years after the first shots were struck here, much of Barnbougle’s ongoing success can be attributed to the golfers who visit time-and-time again, from across Australia and overseas, to test themselves across this wonderful stretch of Tasmanian coastline.

Entrusted to build a world class layout on raw and exciting links land, Doak and Clayton created a layout so good that it was ranked among Australia’s best courses within weeks of opening in 2004 and the little town of Bridport was thrust onto the international golf map. 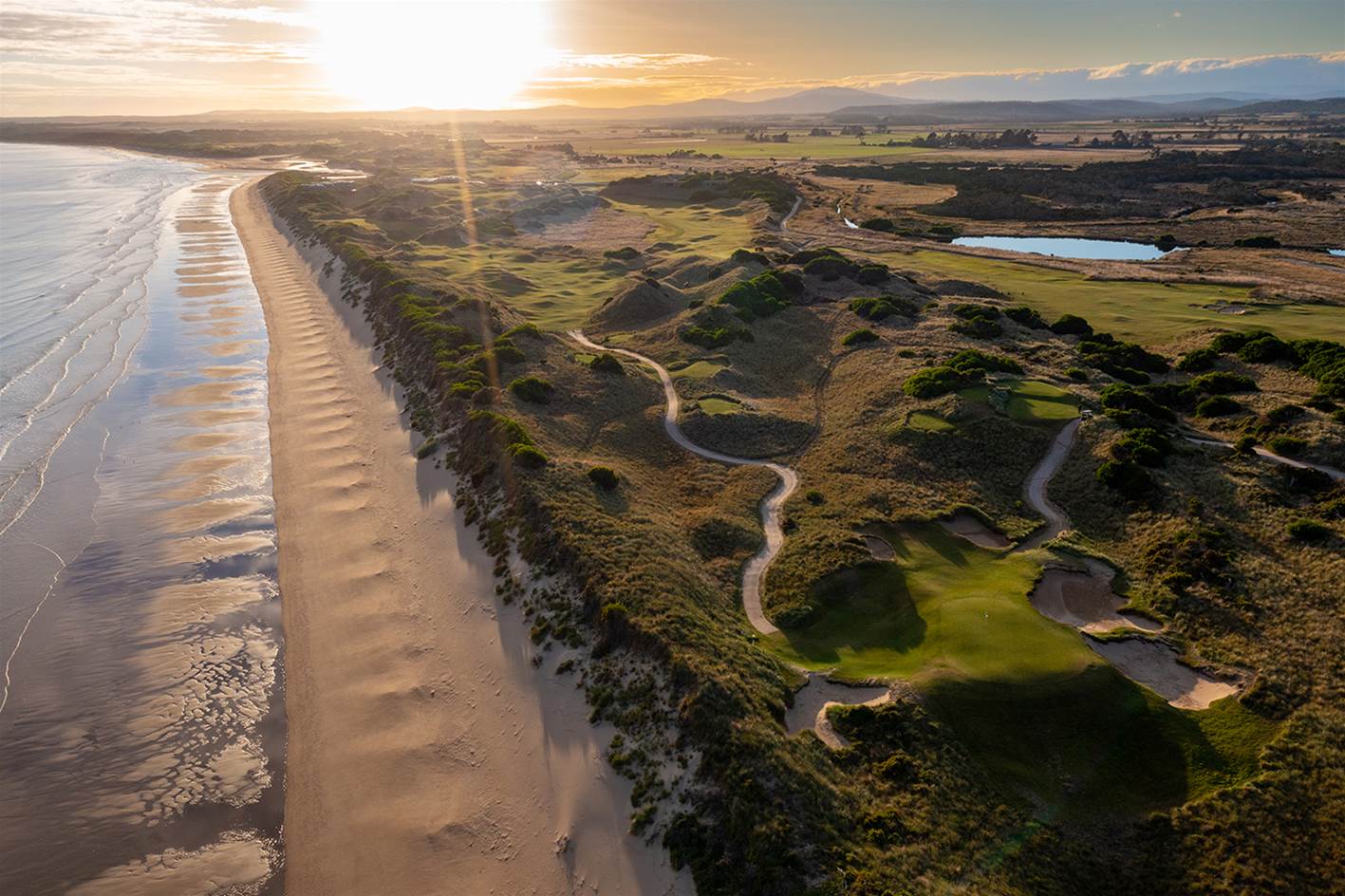 Doak and Clayton’s finished product has lived up to all expectations. It is a brilliant layout and is the finest example of a links course to be found in this part of the world.

The success and popularity of Barnbougle Dunes from day one paved the way for more world class golf course development in Tasmania and ultimately led to the creation of the adjoining Lost Farm course and, later, the King Island layouts at Cape Wickham and Ocean Dunes.

Today, all four courses are ranked in Golf Australia magazine’s Top-100 Courses, with only Ocean Dunes not featuring in the top-10 of that list. Barnbougle Dunes has ranked between No.4 and No.2 in that biennial listing for more than two decades. 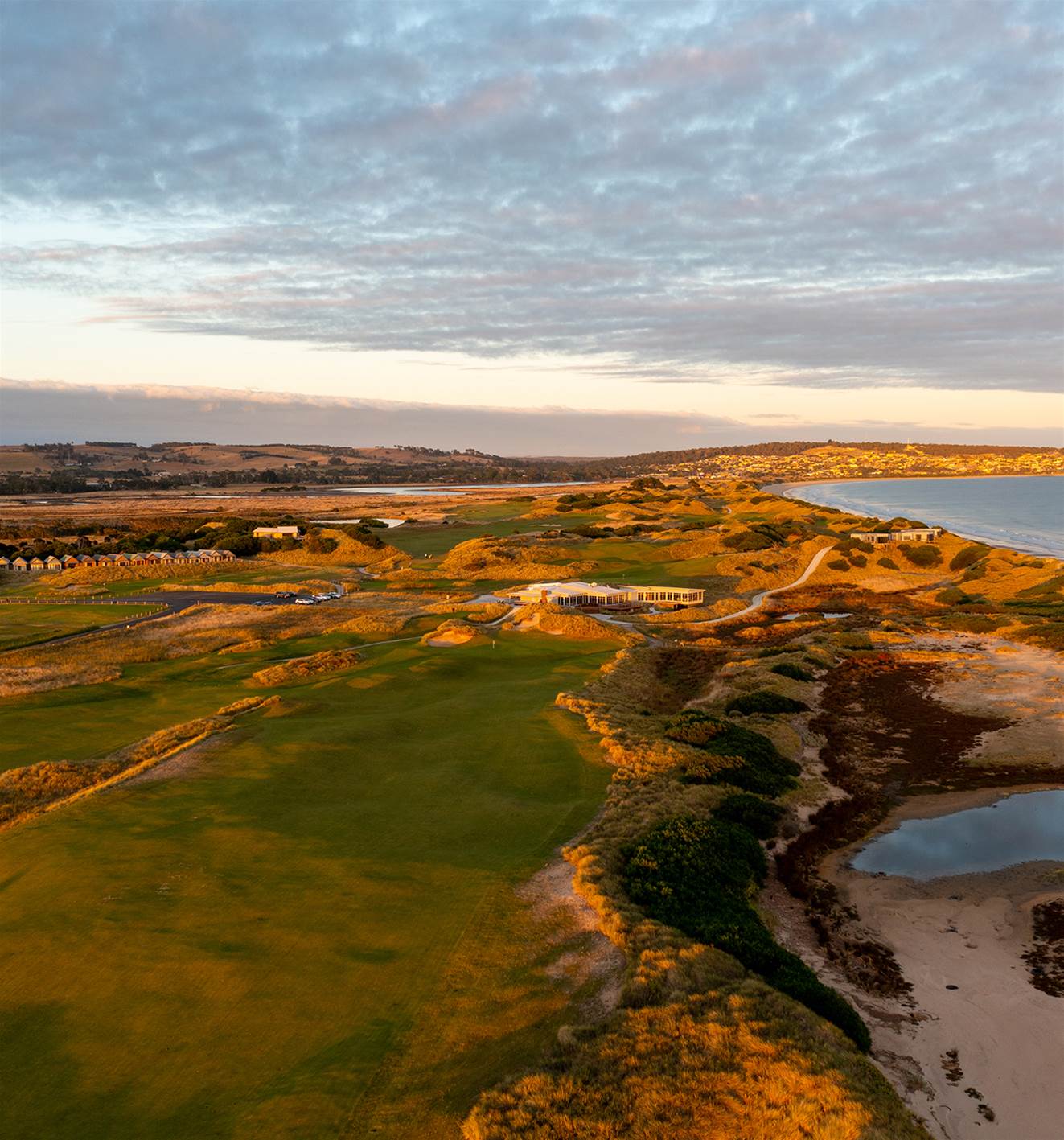 Start of a new day at Barnbougle looking towards the 18th green and clubhouse. PHOTO: Brendan James.

“The older I get, the more I find myself identifying the greatest courses by their life-affirming best holes than the weaker holes that may have been necessary to connect them. Only Royal Melbourne’s West Course has more great holes in Australia,” he said.

And fellow judge, Brian Walshe added: “Barnbougle is Australian golf’s ‘Field of Dreams’. Build it and they will come has proven to be the case for the course that changed the game for both golf course architecture and public golf in Australia.

“Tom Doak and Mike Clayton built a raft of holes that are not only some of the best in the country but are the equal to anything overseas. The 7th shows that you don’t need to have a 450-metre par-4 to scare golfers, in fact a par-3 that is often no more than a flick with a wedge can be absolutely terrifying.” 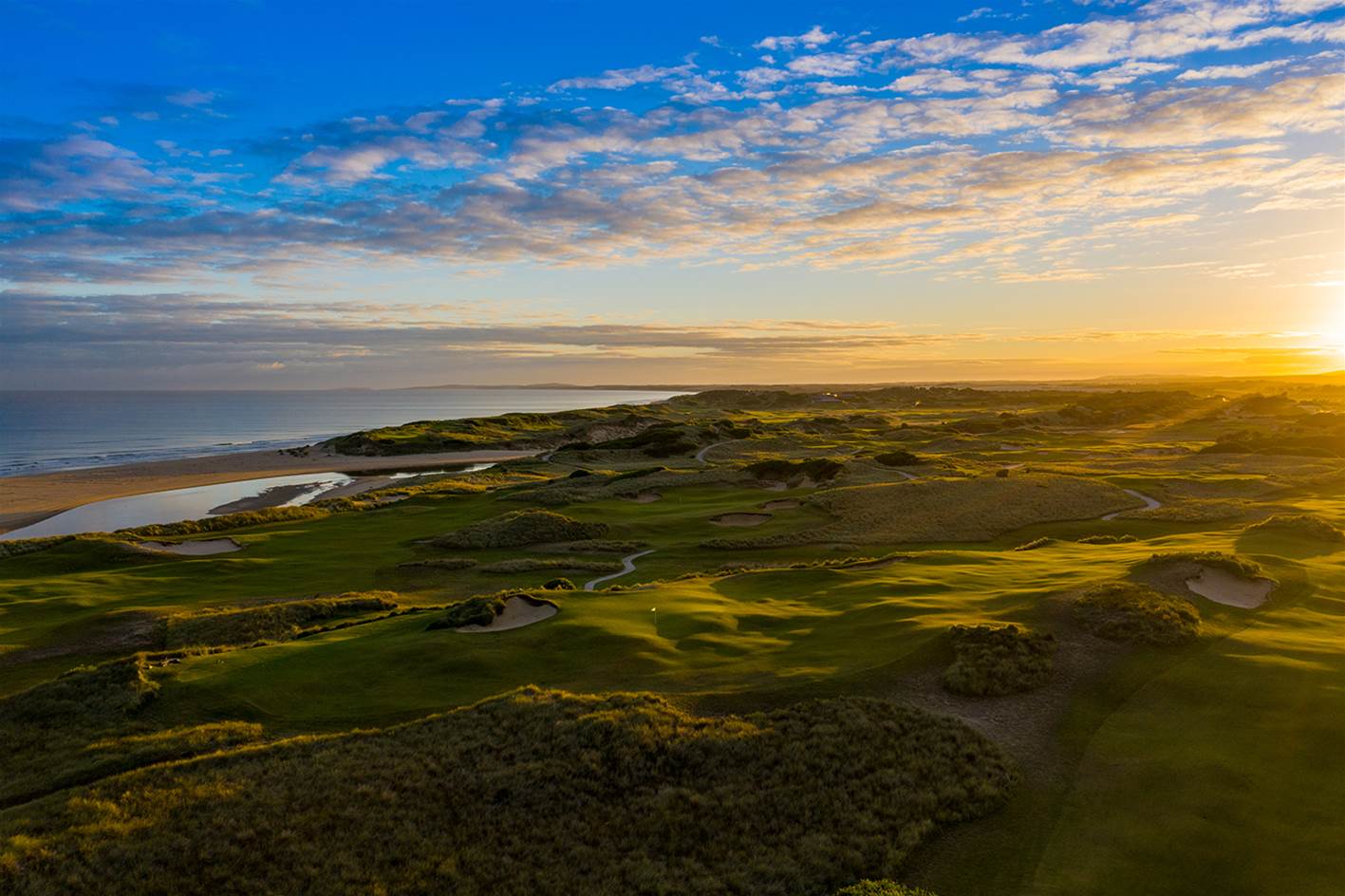 The short, but challenging, par-4 12th hole with all its bumps and hollows. PHOTO: Brendan James.

A round at Barnbougle Dunes opens with a strong par-5 and par-4 combination. The first of the holes that will really “sear into your memory” is the 271-metre par-4 4th, which is known as ‘Homestead’ as the ruins of the original Barnbougle homestead lie beneath the huge dunes on this hole. The prevailing wind is into your face here but long hitters might be coerced into blasting a drive over a massive blowout bunker on the right edge of the fairway in a bid to find the punchbowl green. It is a huge risk – with a 200-metre carry required to clear the cavernous pit – but the reward is an almost certain birdie if your drive clears the sand.

The course winds back to the clubhouse from the 5th tee onwards, with each fairway occupying a narrow corridor between large dunes. These corridors rise and fall with the natural lie of the dunes land creating a real test for each player’s shot-making ability.

When Doak and Clayton routed the course, it was a piece of Clayton genius that led to the creation of arguably Barnbougle’s most famous hole – the short par-3 7th, known as ‘Tom’s Little Devil”. Clayton suggested that instead of following the flow of holes running east towards the clubhouse, the diminutive 7th hole should turn and play to the west with the ocean on the right. Doak rates this little wonder as one of the best holes he’s ever designed.

While the inward nine is more open, the fairways and greens are easily more affected by the undulating land they have been laid upon.

A great example of this can be seen with the green on the 188-metre par-3 13th hole, which Doak says he created to pay homage to Alister MacKenzie’s wild undulating greens at Sitwell Park in England. Doak’s version features dramatic humps and hollows, that are seemingly a natural extension of the surrounding ground, to create a putting surface unlike anything else you will see in Australia. The green lies in a natural amphitheatre created by huge sand dunes and features rugged bunkering in front and a massive blowout bunker through the back of the green. 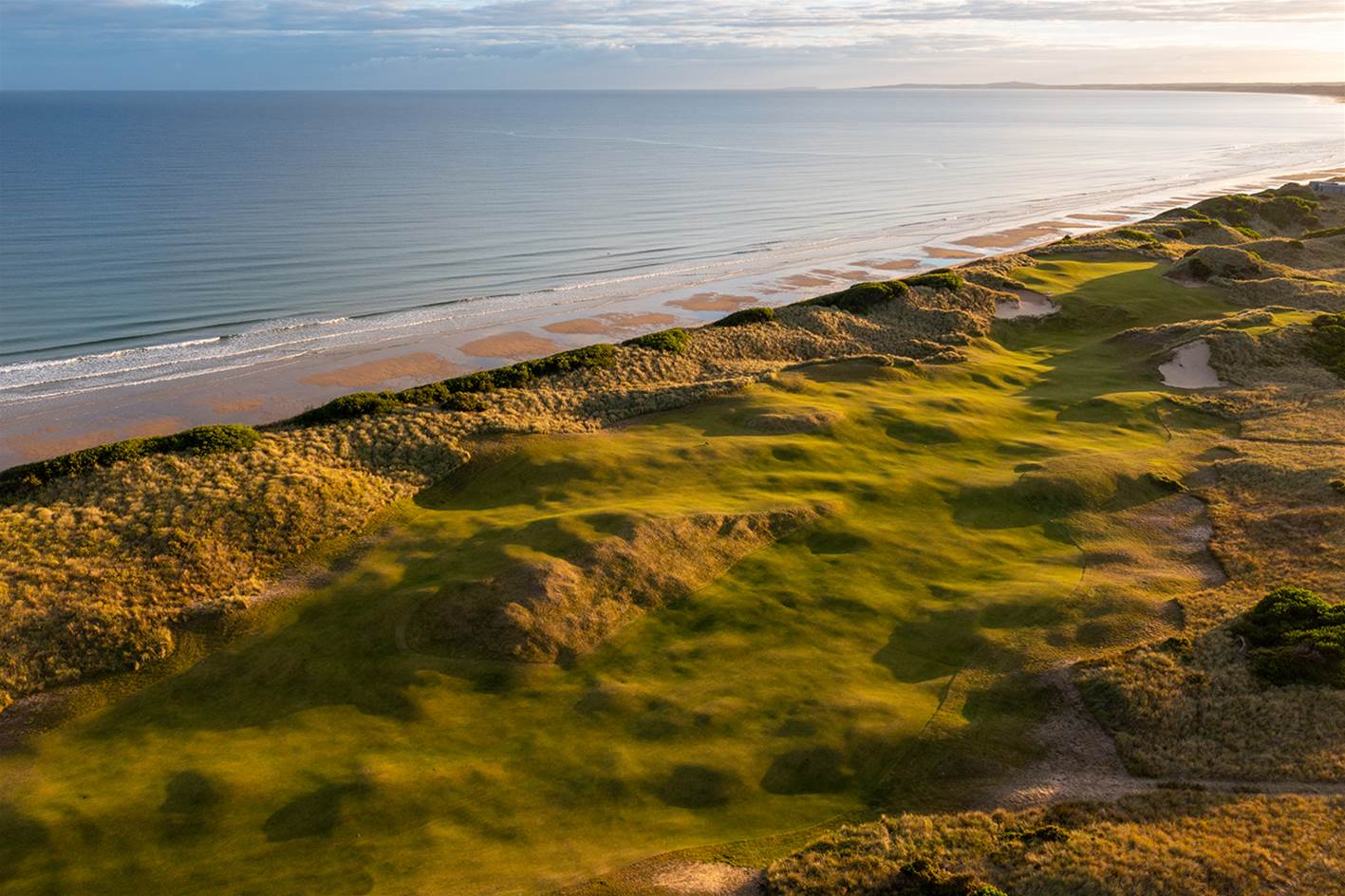 The majestic split fairway on the long par-4 8th hole. Which way do you prefer? PHOTO: Brendan James.

The fescue grass greens at Barnbougle roll at speeds that closely resemble the greens of the famed British links, which is a good thing when you consider the dramatic contouring of most of them and the wind to be experienced on the north coast of Tasmania.

“There are three holes at Barnbougle – the 4th, 7th and 13th – that I think are among the best holes I’ve ever built,” Doak says. “Anyone who has played Barnbougle knows these holes well but in the rest of the world nobody really knows much about Barnbougle and when you’re discussing great holes nobody thinks to bring them up.”

If you haven’t played Barnbougle Dunes yet, do yourself a favour. You won’t forget the experience. 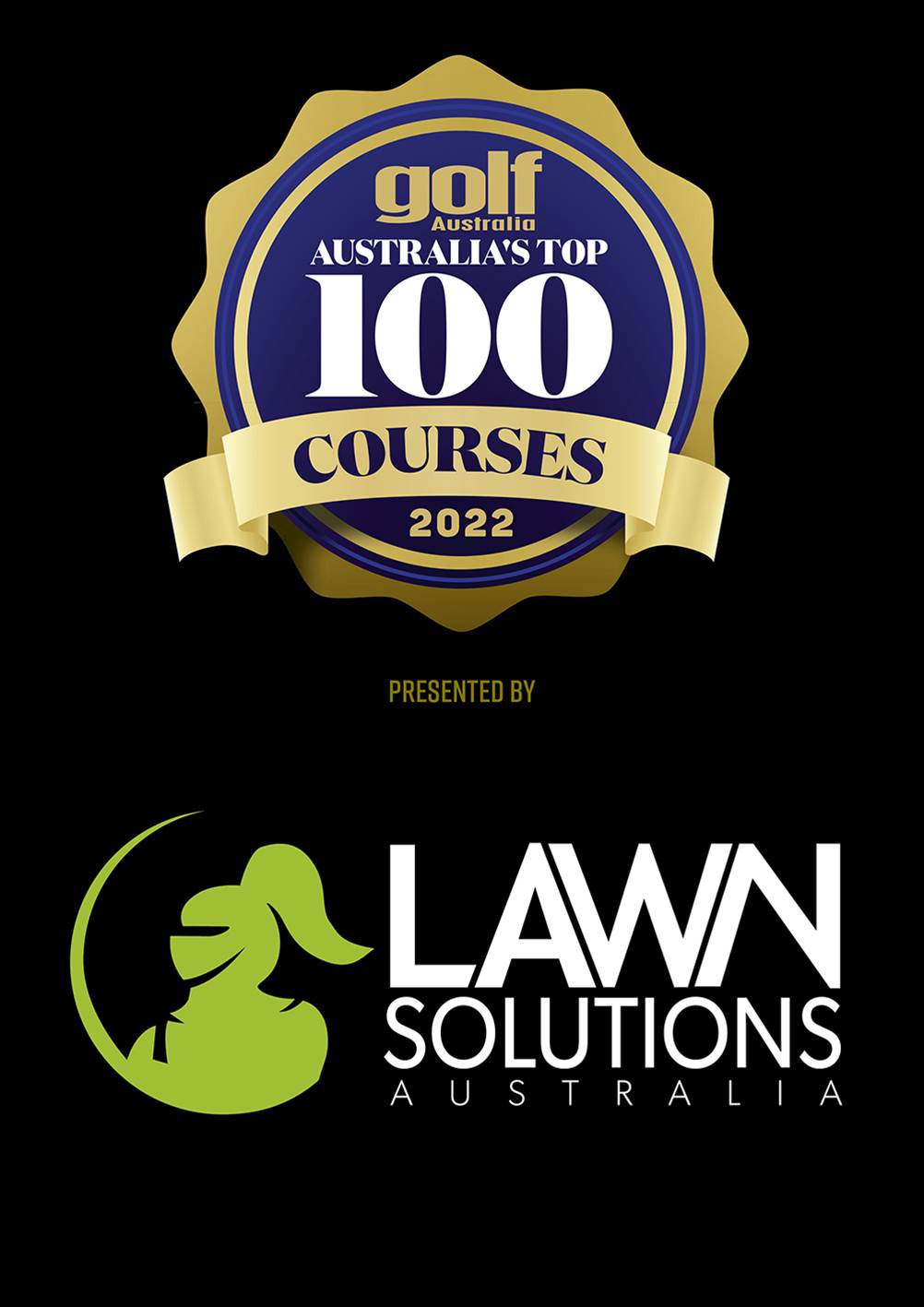