Six weeks into joining the PGA Tour full time in 2010, Rory McIlroy could have been forgiven for longing to be back among his European mates.

His decision to head to the biggest golf show on earth came on the back of a breakout season on the European Tour where he claimed his first big professional win, at the Dubai Desert Classic, and racked up another 13 top-10s in 24 starts. By the close of 2009 the 20-year-old from Northern Ireland was ranked No.11 in the world and the lucrative US Tour beckoned.

He started 2010 playing the European Tour’s Desert Swing and notched up two further top-10s. But his game seemingly abandoned him once he stepped onto American soil. Struggling with back pain and three mediocre performances led into two missed cuts in consecutive weeks – at the Houston Open and The Masters – and the sharks of the American golfing media were starting to question what all the Rory-hype was about. Some were even moved to suggest the pro of just three years might be out of his depth on the PGA Tour. The final round of the Wells Fargo Invitational at Quail Hollow was the stage for McIlroy’s spectacular arrival onto the PGA Tour as he surged up the leaderboard. He went out in 32 and raced back to the clubhouse in 30 for a closing 62 and a four-stroke victory over Phil Mickelson. It was Rory’s “Hello World” moment … a statement-making round that there was a new gun in town.

“He’s got the game of a veteran,” said runner-up Mickelson. “That 62 is one of the best rounds I’ve seen in a long, long time.”

McIlroy signed off on his course record-breaking round by holing a 42-foot birdie putt across the 18th green. The crowd went nuts and Rory punched the sky as he became the youngest victor on the PGA Tour since Tiger Woods won in Las Vegas in 1996 at the age of 20 years and 10 months.

So where did it all turn around for young McIlroy? What was the golfing epiphany that saw his fortunes turn 180 degrees?

It wasn't the 5-iron up the steep hill on the 15th that settled 3 feet away for eagle. Nor was it the 7-iron out of the bunker on the 16th hole that was so good he didn't even bother to watch it land 5 feet from the cup.

The form-turning shot wasn't even on Sunday. McIlroy was on the verge of missing his third cut in a row. He was two shots over the cut line with three holes to play late on Friday afternoon when he struck a fearless a 4-iron from 206 yards into the breeze and over water to six feet and converted the eagle putt. He made the cut on the number.

"Most important shot of the year, to be honest," McIlroy said. "If I don't make eagle there, I'm practicing at Ponte Vedra this weekend. I said after the 66 yesterday, 'That could have been the turning point in my season.' I think today I've confirmed that.

Rory’s opening two rounds – 72, 73 – left him nine shots behind 36-hole leader, Billy Mayfair. Both rounds were eclipsed over the weekend with McIlroy shooting the lowest round each of the last two days. His 66 on Saturday was the delectable entrée to a brilliant Michelin-star rated 62 on Sunday, highlighted by playing the final five holes in five under, and finishing with six straight threes on the scorecard.

"I suppose I got into the zone," said McIlroy, two weeks short of his 21st birthday. "I hadn't realised I was going in 9, 10 under. I just know I got my nose in front and I was just trying to stay there."

"The last two days, it seemed as if everything had just gone right. You get yourself into sort of a mindset like that, and you just keep going. It's just been a great day."

Ten years on, McIlroy is the World No.1 and the winner of four major championships, 18 PGA Tour titles and 14 trophies on the European Tour. 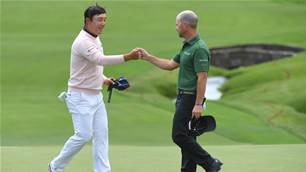