Marcus Fraser has had an incredible 20 putts in 18 holes to shoot 65 and surge into the top-10 at the ISPS Handa Perth International.

IT’S rare to walk off a golf course and lament how bad you hit the ball as you sign for a 65. But when you own one of the best short games in world golf, that’s what you can achieve. 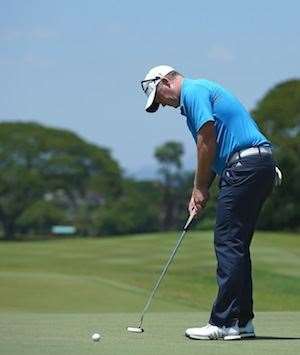 Marcus Fraser, by his own admission, played poorly from tee-to-green but he soared on the wings of a white-hot putter to card a bogey-free seven under and move into the top-10 after three rounds of the ISPS Handa Perth International.

Using an aptly named Odyssey White Hot V-Line putter, Fraser had an incredible 20 putts for his third round. The longest putt he holed for the round was a par-saver from 18 feet on the 3rd hole. His first regulation two putt didn’t come until the par-4 13th hole.

“I played awful,” the 37-year-old said matter-of-factly. “That’s the worst round I can remember playing where I’ve shot seven under.

“Luckily the putter saved me pretty much on every hole. Without that it would have been a pretty disastrous day. It was as warm as the temperature out there.

“It feels nice when you feel you haven’t left a single shot out there. I feel like I got every last breath out of that round, which is good going into Sunday.”

This flatstick form follows on from his winning performance in the Maybank Championship Malaysia last week when he had just 104 putts for the 72 holes.

“I’ve had 20 putts maybe once before but it just got a bit silly today,” Fraser smiled.

“I started the day with two ten-footers, two birdies, and then made an 18-footer for par at the 3rd hole and it kept on going. Lucky it did because I could have shot anything if I didn’t putt well.”

Fraser has taken his putting and work around the greens to a whole new level in 2016. Between the final round of the Omega Dubai Desert Classic three weeks ago and the second round this week, Fraser had missed 42 greens in seven rounds and made par or better 36 times, at a scrambling rate of more than 85 per cent.

After his third round, that mark will go even higher.

Only two players in European Tour history have recorded a season long scrambling percentage of more than 70 percent (since scrambling was recorded from 2003) – Luke Donald in 2010 with 70.3 percent and Louis Oosthuizen in 2012 with 71.5 percent. 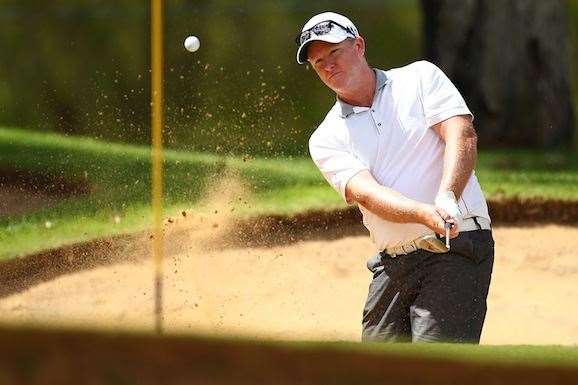 Fraser's chipping and bunker work have also been near perfect in 2016.
PHOTO: Paul Kane/Getty Images.

He will have to maintain his short game excellence for one more round as he tries to chase down the leaders on Sunday afternoon.

“I still don’t feel that comfortable with my golf swing, even though it is progressing, there’s still a hell of a lot of work to do and it’s a long way off from where it needs to be,” Fraser said. “Today, was more luck than anything, I putted really well and stayed in the tournament.”

A high finish for the World No.62 this week will edge him that little bit closer to cracking a spot in top-50 of the ranking and if he can achieve it within the next few weeks he will earn a place in the field for the Masters starting on April 7.