Three separate and almost completely unconnected events, beyond the commonality of golf, this past week personally reminded of the importance of family when it comes to golf for many.

Firstly there was the celebrated charity fundraising event, The Match 2, where Phil Mickelson and Tom Brady took on Tiger Woods and Peyton Manning.

The play of Woods and Mickelson was slightly rusty, but impressive and a sight for sore eyes for all of us who have missed live sport and particularly golf during the coronavirus pandemic.

A view of the exclusive Medalist Golf Club, home to Woods, Justin Thomas, Brooks Koepka, Rickie Fowler and many others, was another welcome experience for those of us who have heard of the club on many occasions.

Watching NFL legends Brady and Manning play a game they both love under intense pressure, while also needling their opponents was another interesting aspect, that I for one enjoyed more than anticipated.

But the four players were also part of the aforementioned rediscovery of the importance of family in the ongoing crusade to increase the number of golfers around the world.

Tiger’s close relationship with his father Earl is a legendary part of the tale of his rise to the pinnacle of the game. Long-time rivals turned friends, Phil Mickelson and Tiger Woods both owe their hall of fame careers to starting the game through family connections. PHOTO: Mike Ehrmann/Getty Images for The Match.

Earl fostered an exceptional talent in the young Tiger and pushed him, whether in the right way or not, to become the biggest star golf has ever seen. One, who like perhaps only Michael Jordan before him, has transcended his sport.

The emotional scenes of Tiger hugging Earl behind the 18th green at Augusta National in 1997 and tearfully falling into the arms of caddie Steve Williams on the 18th green at Royal Liverpool in 2006 after Earl’s death proof of the connection between golf and family for Woods.

Woods’ long-time rival Mickelson has long thrilled fans and on Monday proved again, at almost 50 years of age, why he has been, and continues to be, one of the game’s most enigmatic players, in the mould of Arnold Palmer.

Mickelson is another player who we can thank the family connection for.

The most famous left handed golfer ever, ending up that way after mirroring the right handed swing of father Phil Sr.

His brother Tim now fills the role of Mickelson’s caddie having been a college golf coach, including to a young Jon Rahm, while sister Tina is also a golf professional. Phil’s mother, Mary, the daughter of on occasional caddie at Pebble Beach Golf Links.

"Sundays were spent at the golf club in a cart, father and son playing as many holes as possible before it was too dark to see your drive."

For the two NFL players the connection of family to golf might not be as well known. But nevertheless remains.

Manning is the son of college football legend and NFL player Archie Manning, who has in the past mentioned his wish that Peyton and his brothers played more golf as kids. Archie also part of the family’s role in hosting a Korn Ferry Tour Pro-am in 2018.

An emotional Brady has previously called his father, Tom Sr., his hero. The same man who took him to football games as a child in California with games of golf on the way to famed Candlestick Park part of the bonding exercise. Brady Sr. telling ESPN’s “Get Up!” in 2019 stories of a passionate young Tom throwing clubs.

All four players like so many, introduced to the great game of golf via family.

This realisation came as part of the second event of the week. My own father’s 70th birthday on Tuesday.

Like so many others, golf became part of my life through parents.

Starting as an occasional caddie hugging a staff bag on a trolley dragged by the player, it wasn’t long before a junior set of clubs were purchased and I joined Dad and sometimes Mum and my brother on the course.

As skills increased, Mum, a determined but not naturally gifted player, and my brother, nowhere near the sport obsessed child as your correspondent, were less common playing partners.

Following a battle with cancer and Mum’s death, golf became a family paradise personally as a pre-teen and teenager.

Sundays were spent at the golf club in a cart, father and son playing as many holes as possible before it was too dark to see your drive.

A special bond was formed, that without sport and more specifically the game of golf may have proven unlikely.

Celebrating milestones is always a cause to look back at the past, this one occurring during a time of thinking about golf generally rather than week-to-week tournaments as well as the showpiece of The Match 2 and its four stars, cause to realise once again my own unique connection. One that has turned into a career.

The third moment of the week came from Oakleigh Golf Course professional Sandy Jamieson, the creator of 1Club golf. A concept of a single club designed to encourage new golfers at his public golf course in Melbourne.

Jamieson blogs on his 1Club.golf website on occasion on various topics. Most recently about the importance of families to struggling golf clubs.

Jamieson’s points are well made and once again reinforced the importance of the familial connection in golf, particularly with the below paragraph.

“Families are the future and always have been, with clubs being built around the introduction of new members through family and friends,” Jamieson writes. “It’s very unfortunate that golf clubs have lost relevance to families with young children right at a time when they have the opportunity to get the next generation involved. The idea of one parent staying home to look after the kids on any day while the other plays golf on a regular basis just doesn’t cut the mustard with the majority of modern families. And it shouldn’t be that way.”

Before concluding with another strong opinion that he believes will help end the longstanding issue of men’s and women’s competition days and rights to the golf course.

“The other major benefit of having families together at a club is that gender equality will just happen rather than having to be designed. In modern families, decisions are joint and for the benefit of everyone in the family. Bringing this dynamic into golf clubs will have the same effect and the sooner it happens, the better off golf will be.”

Although the concept that family and golf are so often intertwined is not new, and the idea that families play an important role, perhaps now more than ever, in the growth of the game the same.

We are fortunate that events, like the three this past week personally, are there to remind us of this extremely important, and largely unique, aspect of golf.

One of many in the very long list of reasons that make this game so special. 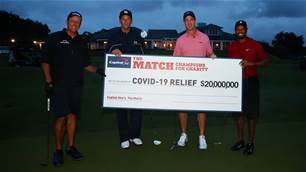