The mere mention of dress code and golf somewhere near one another is enough to cause furious debate.

The concept that a certain standard of dress be required to play the game of golf is longstanding, and is highly valued by some sections of the industry and groups of players.

On the flipside it is often considered one of the detrimental elements of the sport to many new golfers and even those already transfixed with the game, who wish to play in a more relaxed style closer to their day-to-day wear.

Dress codes have certainly changed to varied degrees at golf clubs around the world, and the person searching for an absolute answer or resolution to this longstanding debate may as well be aiming to play a perfect round of golf, where no shot is mis-hit and no putt missed.

However, the lack of tournament golf and the opportunity to revisit some golf courses recently has allowed for personal reflection on one of golf’s tenants which has caused frustration throughout my long association with game. Golf has moved on from the days of shirt and ties required in the days of Walter Hagen and Gene Sarazen and it might be time to further strip back the game's dress codes. PHOTO: Topical Press Agency/Getty Images.

A quick search of the internet will display what currently passes as dress regulations at many of the private and some public clubs in your area.

No cargo shorts is sure to make the list. So too a likely ban on jeans. Expect many to list black socks with shorts, or socks with any other logo beyond a golf course as contraband. The length of sock and shorts being regulated won’t surprise experienced visitors to golf clubs either.

Private clubs of course run their own show, and are entitled to deem what they believe to be acceptable clothing for those players visiting their property and utilising their facilities.

And many public courses with their own unique interests at heart, have relaxed traditional rules to welcome a more diverse range of players.

But within each type of club’s typical approach to this issue remains many questions for mine, and extensions of these rules that mean golf, as it is known to be, is its own worst enemy when it comes to gaining more players and increasing its popularity.

Socks stand out as one of the most curious areas of dress regulation.

I remember days of visiting golf courses as a pre-teen and being required to wear long socks if one wished to wear shorts.

"The ability to adhere to these dress regulations no doubt remains an obstacle for others. So too do they hinder inclusiveness and the image of the game for those outside of it."

If there is one way to discourage young people from taking up a past time that struggles with popularity in that demographic, forcing them to dress like they are going to school or their grandfather is perhaps one of the best.

Thankfully, long socks have gone the way of the dodo, however, many clubs will still be sure that socks be seen. Because obviously the ankle is an offensive thing to be seen for some.

Logo rules on socks appear mostly a way to allow for the sale of some stock, and perhaps one of the more restricting for new golfers.

Imagine telling a friend with not a lot of money to their name that you have invited to join you for a swim that they will have to buy a new pair of swimmers because the ‘Speedo’ on the back of theirs breaks house rules? Doesn’t seem an attractive way to welcome them and neither does asking someone to shell out $20 for a pair of socks with more colour on them in the form of the club logo to replace a perfectly good pair of Nikes. When it comes to the colour of socks anything other than white is often considered an absolute no no.

Yet Adam Scott is one to wear dark socks, even with white shoes, both under pants and when practising at home in shorts.

RIGHT: Tiger Woods' mock neck shirt although allowed at many clubs would still fall outside of some dress codes in 2020. PHOTO: Andrew Redington/Getty Images.

This Tour player contradiction is one area where dress codes become more bizarre and contradictory across all areas for mine.

Scott is often held up as the pin up for golf fashion, and one cannot imagine a single golf club in the world telling him his socks are not to be worn on their course.

Tiger Woods has long favoured a mock neck shirt. Would a course with a strict collared shirt rule turn Woods away? I think not. Let alone his preference for longer, baggy shorts with extra pockets on the side that could almost be called cargo.

When it comes to hats, many clubs still maintain some fine print that they show only golf logos.

But what of the Tour players sponsored by non-golf companies? Or those who favour a baseball team as their headwear of choice?

Jason Dufner’s DUDE Wipes headwear is certainly an interesting endorsement and association, but not a reason to turn a major champion away from playing a game, or suggesting he sacrifice his sun safety so as to comply with club rules.

Certainly in most cases these rules are maintained without strict enforcement but as a safety net for extenuating circumstances, which once again raises questions as to their need at all.

The topic of denim is perhaps the most contentious, when it comes to golf and standards of dress being ‘neat and tidy’.

There are many pairs of denim jeans I would consider much neater and tidier than some of the faded and aged golf pants that would be the preferred option at some clubs.

Personally, I have caddied in Tour events for players sporting denim pants in colours other than blue that have gone unnoticed, while an incident from my early days in the game remains with me to this day.

At an exclusive private club in Sydney, taking a lesson on a Saturday morning before heading to school sport commitments my father was admonished about his not ripped or torn and well-fitting jeans when quickly coming to the pro shop to pay for the lesson and to collect me.

As a member of the club, he was told by his friend and one of those who had supported my own golfing aspirations, that “he should know better”.

Fortunately, a future in golf wasn’t harmed personally due to coming from a “golf family” and understanding the intricacies of the game’s dress codes. But upon reflection, had we been outsiders, it is this sort of incident that could have turned me away and seen another golfer lost.

Personally, an enjoyment of golf fashion and the benefits of moisture wicking shirts, a collar to protect from the sun and golf shoes designed for stability are not lost. (Taking a swing on a slippery day in flat soles and almost eating the turf will do that).

However, the ability to adhere to these dress regulations no doubt remains an obstacle for others. So too do they hinder inclusiveness and the image of the game for those outside of it.

Those in favour of maintaining dress codes will often sight respect for the game and the course as one of the reasons for doing so. However, many golfers will have witnessed resplendently dressed golfers not repairing pitch marks, throwing clubs and not raking bunkers.

Another of the regularly sighted reasons is the uniforms required in other sports. But golf has long been a sport for those not wanting to be a part of team. And its handicap system allows for any person to take part not just the elite, suggesting following team sports’ suit needs not take place when it comes to clothes either.

What players wear when they play golf isn’t going anywhere as a contentious topic. However, if the game is to attract new players, something no golfer will suggest is not necessary, the rules should be relaxed as much as they can be to welcome a wider range of people, particularly those who haven’t been exposed to golf from a young age.

And for those who will suggest the standard of dress will drop significantly if younger golfers are allowed to wear clothes already in their wardrobe that they find more comfortable, there need not be major concern.

Going to a nicer location, be it a bar, restaurant, event etc. inevitably results in selecting something in line with the venue from today’s youth.

I for one hope that by the time my own golfing life is over the average golfer is afforded more freedom when it comes to their dress for the sake of ‘growing the game’.

Who knows, it might just be the impetus to turn that from a catch cry to a genuine movement that makes the game we all love even greater. 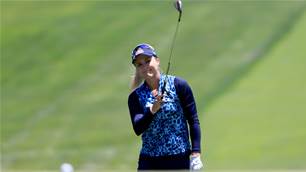