I played in my first Open Championship at Carnoustie in 1999. I was pretty excited. I had failed to qualify a couple of times while I was still an amateur, so it was special for me to make my Open debut during my first year as a professional. I had performed really well in the qualifying and was really looking forward to playing a course I had been to and really enjoyed a couple of times before.

Sadly, that feeling didn’t last. It ended up being – still – one of the most disappointing weeks I’ve had in my career. And it remains, by a distance, my least favourite Open. Only a couple of holes into my first practice round, I sensed something was wrong. I’d seen enough Opens on television over the years to know the course set-up was far from normal. There was rough everywhere.

When I got to the famous par-5 6th – known as Hogan’s Alley – I didn’t know whether to laugh or cry. (In passing, I find it hard to believe Ben Hogan ever drove between the out-of-bounds fence and the bunker. Too much risk). The area we were being asked to lay-up into wasn’t much more than an arm-span in width. Maybe 10 yards. And on both sides of those 10 yards it was a lost ball, the grass was so long and thick.

The whole thing was so discouraging. I shot 81-78 and only missed the cut by five shots. I was far from alone in struggling. Sergio Garcia left the course in tears. He had just won the Irish Open and he shot 89-83. Seve Ballesteros also didn’t break 80 in either round. Neither did Sandy Lyle. Nick Faldo (78-79) wasn’t much better. Nor was Tom Watson (82-73). My fellow Aussie, Rod Pampling, got round in 71 on the opening day and led the field. Then he shot 86 and failed to qualify for the weekend. Amazing stuff. The rough for the 1999 Open was simply diabolical … and wrong. PHOTO: Getty Images.

Thankfully, I can’t remember too many specific shots from that week. But I do recall being in the rough and not even thinking about where the green was. My only concern was finding the shortest route between my ball and the fairway. Two yards was probably doable. Ten yards was no certainty. Sometimes I was just trying to move my ball into the least amount of rough so that I might have a chance with the next shot. It was carnage and, it almost doesn’t need to be said, hardly the best way to identify the best players.

All in all, I quickly realised that scoring well wasn’t going to have much to do with how I played. I would have to get lucky and change my mind-set completely. But it isn’t easy to adjust from trying to shoot under-par to thinking 78 is a good score.

The most annoying aspect of the whole week was that Carnoustie is a fantastic course. But it was too narrow. And the rough – although not that long by links standards – was thick and dark green. It was US Open rough but 12-inches high, or six inches longer than even the USGA likes to see for its championship. It was basically impossible.

The lasting memory of the event for every golf fan is, of course, what happened to Jean Van de Velde on the final hole. Needing only a double-bogey to win, he made a triple and lost the play-off to Paul Lawrie. But what went on was so appropriate. It was always going to end up with something stupid.
If you want to sum up the whole week, all you have to do is watch Jean play that hole.

Anyway, eight years later I was back and in a whole different frame of mind. I had won the US Open the year before and thinking I could win more majors. I didn’t play well though. I was spraying the ball too much off the tee to do that. But that fact was all my fault. It had nothing to do with the course. The Carnoustie I played that week is basically how Carnoustie should be. The rough was certainly a lot more playable.

The great thing about Carnoustie is that you change direction constantly. That is always challenging on a links. I love the Old Course at St. Andrews, but it can get a bit tedious playing out in a constant left-to-right wind for two hours, then turning and playing for another two hours in a right-to-left breeze. You wouldn’t build the Old Course that way if you didn’t have to.

Carnoustie isn’t like that though. It is – along with Muirfield – the best ball-striking test on the Open rota. You can see the trouble. You know the shot you have to hit. You just have to summon up the guts to hit it. You just have to do it, which is, I think, why the ultimate
shot-maker, Hogan, did so well there during his only Open in 1953.

No one ever describes Carnoustie as “pretty.” But it ticks all the boxes. And it asks all the questions. It has the railway line running behind the 9th green and alongside the 10th fairway. (A links isn’t a real links without a train). It has some blind shots, most memorably over the “Spectacle” bunkers at the par-5 14th. And it builds right from the 1st hole, which is pretty straightforward, to an amazing finish.

RIGHT: Not quite singing in the rain in 2007 but at least my scoring was my fault, and not the course's. PHOTO: Getty Images.

The last six holes are universally brilliant. The par-3 13th is a little beauty. And the Spectacles is a genuinely great hole. No one likes blind shots but that one is thrilling and so much fun to hit. The 15th is one of the best par-4s on the course. The 16th might be the best long par-3 in the world. The 17th is weird but good. The approach to that green is wonderful.

Then there is the 18th. In truth, it is way too hard. But, like the Road Hole on the Old Course, if you play it as a three-shot hole it is an easy five. It should be easy for every professional in the field this year to have a putt from less than 15-feet for par. Every time. If that is your mentality. Where it gets “interesting” is when you try to have a birdie putt. That’s when all kinds of numbers come into play. If anyone needs a four to win the Open and makes it, he will have earned his victory. There is no faking it there.

Indeed, if the quality of a course can be measured by the quality of the players who have won there, then Carnoustie has nothing to prove. Tommy Armour and Henry Cotton were genuinely great golfers. So was Hogan, maybe the best ever. Gary Player. Tom Watson. Paul Lawrie – one of the best links players on the European Tour during the past 25 years. Padraig Harrington, in the year Rory McIlroy won the silver medal as the leading amateur. It’s an impressive list. You clearly can’t win there unless you are great. 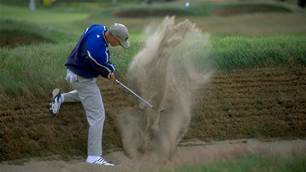 Round to forget: The day ‘Carnasty’ put Sergio Garcia on the canvas