Late last year I spent some time watching two events on television. It was quite a contrast.

The Andalucian Masters at Valderrama was won by Englishman Matt Fitzpatrick with a six-under-par score. And across the Atlantic, Rory McIlroy won the CJ Cup at the Summit Club in Las Vegas, shooting 25-under-par to do so.

As many people know already, Valderrama is a difficult golf course, very fiddly and narrow. Missing fairways invariably leads to problems. The greens are small and, in places, a bit crazy, if my memory of the place is correct. It tends to get a bit windy there too. Just about everything is awkward, the feeling on many tees is one of being uncomfortable and restricted.

The Summit in Vegas is nothing like that. It’s ‘have at it, boys’ off the tees. As long as you keep your ball on green stuff you are going to have a chance to make birdie, which is not to say the course was outrageously soft the week Rory won. I saw balls bouncing and rolling. But the desert weather is so easy to play in. When you get a feel for how the ball flies, there is nothing to stop low scores. The surfaces tend to be all but perfect. It’s a bit like playing golf on fake grass. It looked like a fun place to play and the scores reflected that.

In contrast, I’m sure the guys at Valderrama weren’t having as much fun. Or should I say the same sort of fun. I’m guessing those who played well left the 18th green with a satisfied grimace on their faces. Shooting a good score there is a bit like surviving a boxing match.

Which brings me to my point/question: which of the above scenarios makes for a better tournament?

For me, both provide entertainment. On one hand, there is merit to seeing pros struggle to hit fairways and be faced with really difficult shots. I like courses that force really good players to have to play their best. I like to see high-level golf demanded. And the very best courses have the subtleties to do just that.

"My mind goes to ice dancing and Torvill and Dean. I had no interest in that sport. But when I saw them perform, I knew I was watching something truly great. I could feel it, even if I knew basically nothing about what they were doing." – Geoff Ogilvy.

Don’t get me wrong. I don’t think score relative to par is that important. Look at the Masters. They get the balance right. They set-up Augusta National to identify players in form and the all-time best players. And those guys generally shoot double-digits under par. There are lots of birdies. But on tough days, scoring low can be a real struggle. Whatever though, they allow a superior player to show just why and how he is better than everyone else.
They provide the perfect platform for that. You don’t need to be great to separate yourself from the rest. But if you are great you will separate.

To create that, you need a course that has great subtlety and nuance and design. The danger is making a course too hard that, no matter how well someone plays, they can’t make a great score.

Or, conversely, it’s too easy. All the par-5s can be reached in two. The fairways are virtually unmissable. And the greens are perfect. When all that happens, everyone is making lots of birdies and the whole thing becomes a putting contest. It’s fun to watch people make birdies. But it’s not really fun watching absolutely everyone making putts.

So, while winning scores are really not that important, how those scores are compiled is key. For one thing, par is an arbitrary concept. You can make it whatever you want; it’s just a line in the sand, a method of measurement. Think about it. There have been plenty of great tournaments over the years where 20-under has won and more than a few where
two-under has been the best score. Both can be compelling.

The real key is getting the best players in the world to come up with stuff that only they can do, then the course is fine – no matter the winning score. Royal Melbourne does that. Augusta National does too. And the Old Course at St. Andrews has always done that, maybe better than anywhere else on the planet. Look at the list of winners there. It’s basically a ‘who’s-who’ of legendary – or at least incredibly talented – golfers. 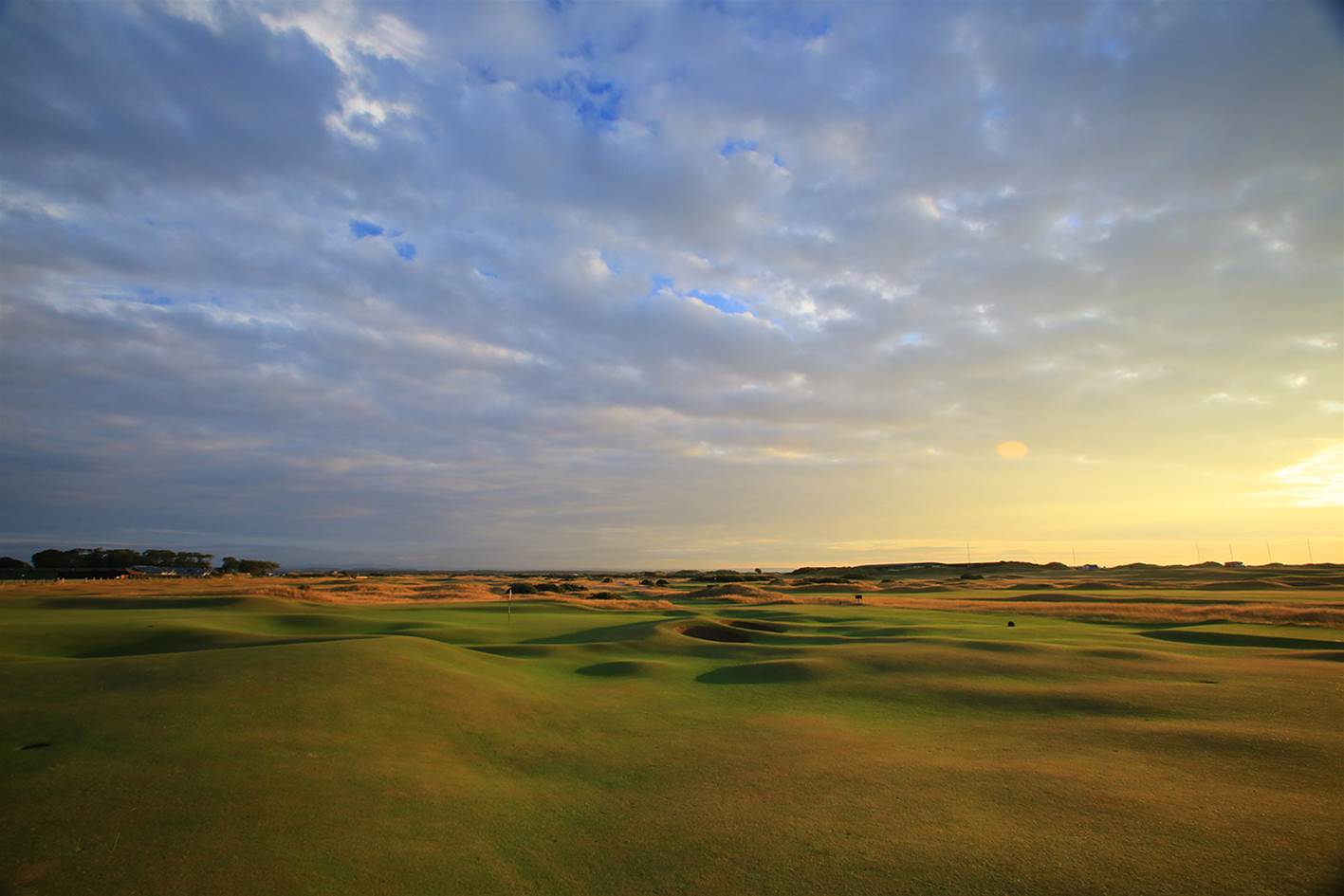 The nature of the Old Course demands a wide range of golfing skills to score well. PHOTO: Brendan James.

Looking at the Old Course it is obvious that it demands a variety of skills. It’s not just how far you hit it, or how straight you hit it, or how well you chip the ball. It’s all of the above and more. And it needs you to be brave. The best courses all do that. They demand brave swings. Look at the Road Hole. You have to make two brave swings there, just to make a four. You just have to do ‘it’ under extreme pressure. And only the very best survive that test.

That’s such an important aspect of elite golf. I want to see pros being brave. I don’t want them smashing drivers and not worrying about where they finish. And I don’t want them backing-up 9-iron approaches to pins in little bowls. That’s all fun and entertaining. But for the best tournament value, you want to see players do impressive stuff you can’t do. You want to see the golfing equivalent of Roger Federer hitting a top-spin backhand pass down the line.

The same is true at Augusta. I want to watch guys hitting approaches close to the back-left pin on the 11th. It’s incredibly difficult to do that. But when someone does it, that’s a fun shot to watch.

So, courses that demand variety of shot-making and brave swings produce the best tournaments.

The tough part, of course, is drawing the ‘line’ in just the right place. Sometimes the U.S. Open can turn into too much of a scramble. Having said that, there is something satisfying about a traditional U.S. Open. They can be incredible to watch. Watching a really good player grind out a 69 with 17 pars and a birdie is really impressive. The danger is going too far and creating what amounts to an “execution contest,” the player who hits most straight shots winning. There has to be more to great golf than that.

"Tiger was at his most interesting when he was playing a course that peaked his own interest level." – Geoff Ogilvy

Let me define “variety” a bit further. I’m not talking about the old cliche that says the best courses ask players to hit “every club in the bag.” No. I’m more interested in seeing every shot in the bag, no matter what club is being used. I want to see players advantaged by their ability to hit the ball higher than the rest. Or lower. Or left-to-right. Or right-to-left. I want those guys to find ways through a course’s defences. But not always with the same shot. I want to see challenges that only the best – those with all the shots – can cope with.

Appropriate course set-up on a great tournament venue will almost guarantee that the best will show he or she is the best. It won’t really be about current form and more about just how good they really are. The best courses do that, as Royal Melbourne did at the last Presidents Cup. Tiger stood out so much that week it was amazing. Even for those spectators not exactly steeped in golf, I have to think he was a compelling sight. They wouldn’t know why he was so great, but they would still recognise how great he was.

Quite simply, Tiger was at his most interesting when he was playing a course that peaked his own interest level. The course, through its own greatness, created more interesting golf.

There is something inside all of us that recognises true greatness. On some level, we all get that when we see it. It’s like listening to great music. Or looking at a great painting. My mind goes to ice dancing and Torvill and Dean. I had no interest in that sport. But when I saw them perform, I knew I was watching something truly great. I could feel it, even if I knew basically nothing about what they were doing.

And the same is true of tournament golf. It should be the aim of every event and venue to produce a platform that will allow those watching to feel that feeling. And the better the golf course is, the more that feeling comes out. It inspires. It engages. And it entertains. Never mind the score.

Change as good as a holiday for Scott