It’s difficult to know just what to make of the Masters. Every year reverence for the event seems to get more overblown yet somehow, most years, it delivers in terms of golf.

And despite all the legitimate criticisms that can be levelled at the club, its history and impact on the game, it somehow boasts a highlight reel almost unmatched in sport.

There has been at least as much focus on The Masters this week as there would have been had the tournament been played, testament to its lofty position in the game.

Peter Thomson may have once referred to is as ‘the greatest con in sport’ but Lee Westwood summed up the more popular position when noting Augusta is ‘like Disneyland for grown-ups’.

Perhaps this tension of opposites is the key to the tournament’s extraordinary success because, as the last few days have proved, the Masters certainly hasn’t lost any of its lustre in the minds of the golf public.

And perhaps that’s no surprise given the quality of its most memorable moments.

From Sarazen’s ‘shot heard round the world’ to Nicklaus’ unlikely charge in ’86 to Tiger’s still surreal fifth green jacket 12 months ago, they are some of the most iconic in the game.

Unique in men’s major championship golf for being played at the same venue each year, the Masters offers an annual snapshot of many facets of the game.

Over the past week those of us who spend more time on social media than doctors recommend have been reacquainted with many such memories, and they haven’t been restricted to happenings on the course.

The heroics of Faldo, Woods, Nicklaus, Watson, Ballesteros and co get their rightful share of attention, but for the close observer there is much to be gleaned about the course, fashion and the changing nature of the game and how its covered.

What joy it has been, for example, to be reacquainted with the musings of Henry Longhurst from the tower at the 16th hole.

30 years later Verne Lundquist would utter something eerily similar as Tiger Woods’ birdie chip hung on the lip at the same hole on his way to a fourth green jacket.

“In your life have you seen anything like that,” Lundquist blurted out, the call now as inextricably linked to the shot as vision of the Nike logo staring out at the world for a full two seconds before the ball dropped.

But it’s not just the players and those who talk about them. What of the look and feel of the game and the course?

Larry Mize’s win in 1987 is a lowlight, not for the manner of victory but for the horror of his ‘Aureus’ shirt.

The jumper Nick Faldo wore at the jacket presentation in 1990 was nothing short of bizarre though perhaps not as outlandish as Bernhard Langer’s all red ensemble five years earlier.

And what of the course? Augusta National is famous for making significant changes to the layout without anyone being the wiser but much of what is different in the 21st century is obvious when viewing old tapes.

For example, the chute of trees players now hit through on 18 is a far more daunting prospect since the hole was lengthened by some 50 metres in 2002.

Similarly, the 11th hole has had both length and trees added while just last year the fifth tee was moved back some 35 metres and the fairway bunkers repositioned to add difficulty.

Architecture types will reel off dozens more changes since the course originally opened in 1934, all of which only confirms that Augusta has been in an almost constant state of evolution for most of its existence.

And whether you’re a fan or not, it’s undeniably important to the game’s past as well as its future. 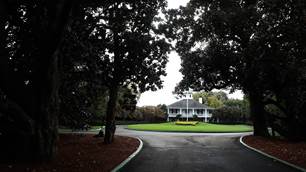