Remember thinking how easy and mundane golf had become playing with your natural hand that you needed to make it so hard you felt like a beginner again?

For golf professional Ryan O’Flaherty however, searching for a new challenge in the game resulted in something similar as he set himself what some would consider an impossible goal for 2020.

The qualified personal trainer and Assistant Professional at Cromer Golf Club on Sydney’s Northern Beaches decided to ditch his right-handed clubs for the year and take up the game left-handed.

But not happy with progressing to simply playing the game competently left-handed, O’Flaherty set his sights on lowering his handicap to scratch in just 12 months.

“To be completely honest, I think there is a lot of things you want to do in life, and I was like ‘It would be pretty cool to look back and say I played to scratch left-handed and right-handed’. It was just one of those things, so I thought let’s do it,” O’Flaherty told Golf Australia magazine of how his goal came about. 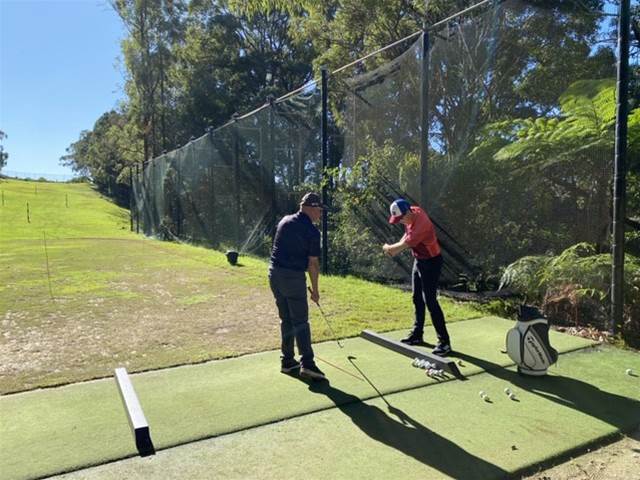 O'Flaherty has even switched to swinging left-handed during his lessons. PHOTO: Supplied.

Despite the disruption of COVID-19 to his regular games with members, ‘Ryan O’Lefty’ (as he has become known around the club) lowered his official handicap to an impressive 8 in less than six months.

There is no question as a former PGA Tour of Australasia player, who also spent time playing secondary Tours in Europe, he has a distinct talent advantage when it comes to the game of golf.

And O’Flaherty is certainly not the first golfer with the ability to play well on both sides of the ball, with major champion David Graham famously switching as a trainee professional and Australian Open winner Cameron Davis owning an almost mirror image swing left and right-handed.

“I remember after two or three holes thinking this is going to be really hard, because I could always make contact, but not necessarily know where it was going,” he says of his first outing left-handed."  - Ryan O'Flaherty.

However, his commitment to relearning the game while working his hours in the Pro Shop, teaching members and running his own personal training business and website (www.flatsgolfandfitness.com) for no other benefit than to challenge himself and help understand the learning process for his student is impressive.

And the members at Cromer have certainly responded positively.

“The members have gotten behind it 100 percent. They are all super encouraging about it, they give me a bit of stick when they see me hit some poor shots.

“I do try and play weekly with the members, get out and have a hit with them so I am not just a face behind the counter or just a coach, getting out there and them seeing me struggle a bit is entertaining for them.”

The struggle O’Flaherty mentions has gone from little idea where the ball is going to a tidy game that has benefited from his knowledge of not only the golf swing, but the human body through his personal training background.

“I remember after two or three holes thinking this is going to be really hard, because I could always make contact, but not necessarily know where it was going,” he says of his first outing left-handed.

“I couldn’t hit a fairway, shorter clubs were ok, but it was a bit of a fluke. But now it is starting to progress. I have always trained both sides in the gym, to keep everything as equal as possible, but just the coordination thing is the hardest, getting the right sequencing, clearing the hips enough and getting the lower body ahead of the upper body rather than just swing with the arms.

“Obviously as a golf pro you know the theory, but definitely with the fitness side, I have noted limitations now more so in my body. Say hip rotation, I have noticed my left side is better than my right side, a lot more than I did before, and I pay more attention to that now.”

As anyone who is trying to achieve a significant and difficult goal will tell you, intermediate targets and rewards are important.

For O’Flaherty, this came in the form of a fitted set of golf clubs once he reached single figures. But just like every golfer who has improved significantly and gone down the new equipment road, sometimes there are clubs that have delivered you to that point that can’t be let go.

“I remember when I broke that single figure mark – it came a bit earlier than I expected – I went through fitting with TaylorMade and got kitted out for new set, I had to buy them (laughs).

“My putting has been really, really good. It is kind of like putting like a kid, you just get up there and hit it you don’t even think. So, I have this putter from this old hire set that is probably worth $1, if that. I would never be seen with it right-handed, but it just works.”

The fitted clubs along with his own training for a left-handed swing have further improved his game, and help rationalise his wholistic approach to the game of golf both for himself and his students, be they golf lessons or online fitness clients.

“You can only do what your body can do at the end of the day. Training your body, teaching your body to feel comfortable hitting balls on the other side is just a matter of time spent doing it. And again going through it myself, it adds to the benefits of being able to teach golfers and see them improve on the range but also give them the exercises and the training tools that they need to then take that a step further.”

From his comments, it is clear O’Flaherty is passionate about the game of golf. It is also obvious he is one of the many examples of modern teaching professionals who look far beyond the golf swing for ways to help their students improve.

Having given up playing for a living after failing to net the results he wanted and discovering a passion for coaching, his left-handed experiment appears to have reignited a love of playing the game that can dwindle in many former Tour players. And despite his rapid progression, O’Flaherty still has his moments that make him sound more like an average golfer than one who could potentially end up a scratch player two ways.

“I have gone through making some changes in my swing and I thought ‘Man, this is hard’. I go out right-handed and change my grip a bit and it feels comfortable after a few shots, but left-handed it is really tough.”

Maybe even he doesn’t find this sometimes maddening game that easy after all.