Later this year North Lakes will celebrate its 15th anniversary and some might suggest in all that time, the course has not looked as good as it does now.

North Lakes Golf Club opened for play in November 2002 as the centrepiece of a fully planned community on more than 1,000 hectares of land, 25kms north of Brisbane.

Today, it is almost hidden away within the surrounding residential area, which has evolved into a thriving suburb complete with a huge shopping centre, several schools and thousands of homes.

Just as North Lakes the suburb has grown, so has North Lakes the golf course. It has matured nicely over the years with trees planted during construction now filling in most areas away from the fairways, creating greater definition of each hole.

The par-72 layout is the creation of Graham Marsh, who has produced two courses in one. By that I mean, each hole offers two distinct playing alternatives. The aggressive player capable of hitting prodigious drives can score well if they follow a certain line on the par-4s and par-5s. An aggressive line can result in small downslopes or humps being found and drives bounding on for an extra 30- or 40-metres. All of a sudden a short iron instead of a mid-iron is required to reach a green. But stray from this narrow line and trouble lurks.

On the other hand, the conservative strategist and shorter hitters will also enjoy North Lakes’ relatively safe lines. Playing away from trouble at North Lakes is not difficult. The fairways are reasonably wide, the greens large and inviting and the rough is trimmed to a length that won’t have you driving home with a wrist in a cast.

There are more than 80 bunkers scattered along the route. Many are large and  clover-shaped but are not ominously deep. For the player not on his game these will intimidate but there is sufficient room to weave your way past them on the fairway and, in most cases, fly over them to hit a green.

Water also plays a major role in Marsh’s design. The winner of 60 tournaments worldwide was keen to keep the natural waterways on the site and enhance them to become a feature of the course. 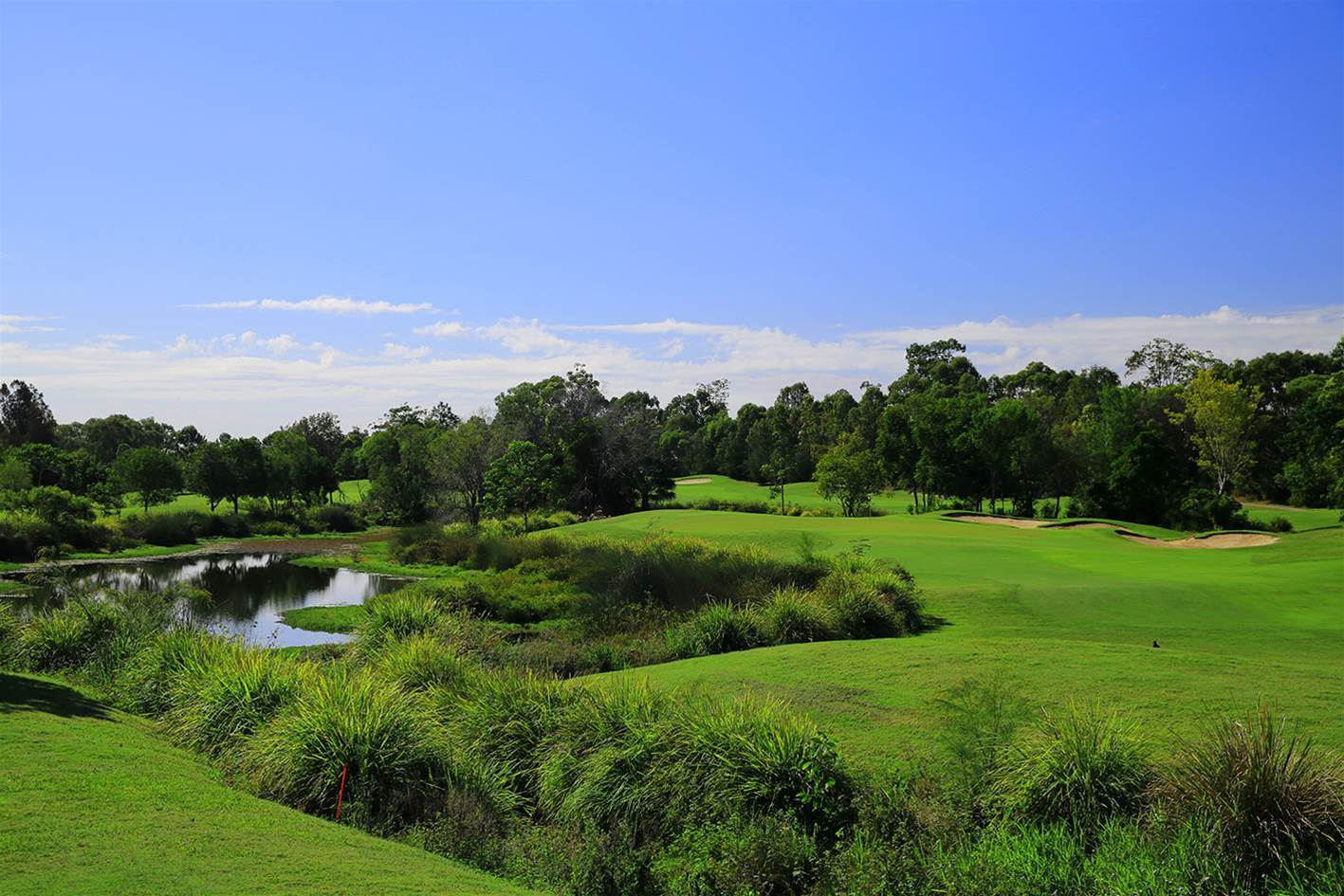 The 7th hole is the shortest of the par-3s but it’s no pushover with water and bunkers in play. PHOTO: Brendan James

“Strong landforms, rocky waterways, water carries, lakeside greens, billabongs and lakes produce a golfing experience unique to the Brisbane environs, which will provide the golfer with an ever-changing challenge and a variety of playing strategies,” Marsh said of the role water played in his design.

During the planning stages, Marsh promised to build a course that “will be a stern test from the back tees and a pleasure from the front”. The front nine has a rolling parkland feel that incorporates plenty of bunkers and water hazards, while the back nine winds its way through native bushland.

At 6,455 metres from the “Black” championship markers, North Lakes is a very good test for better players. The “Blue” markers offer a shorter 6,178-metre route but no less a challenge. The shortest course, at 5,496 metres, is from the “Red” tees and is recommended for beginners and higher handicapped players. 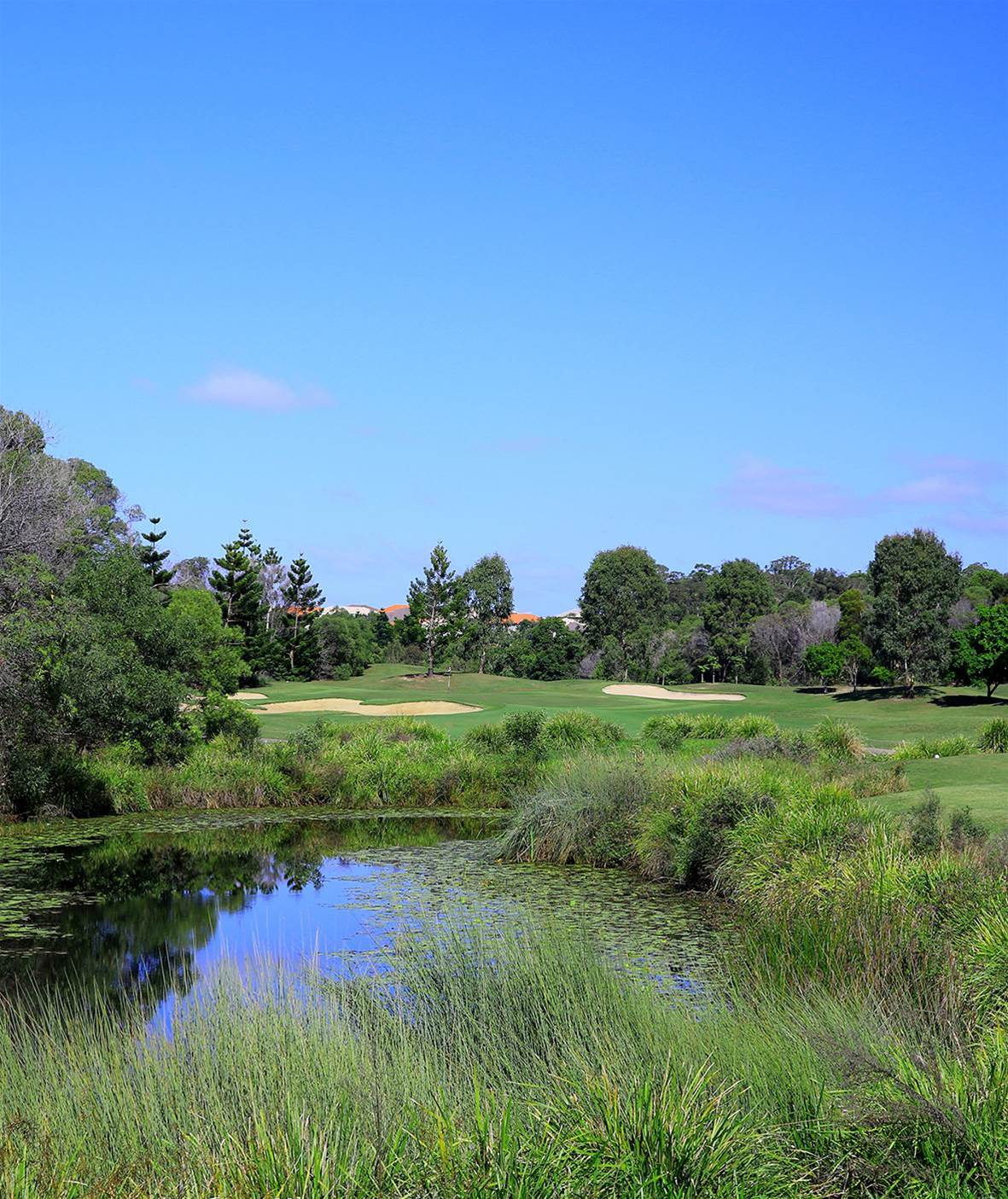 This writer has been known to poke himself in the eye with a red-hot stick and tackled the course from the Black pegs.

The most memorable hole on the outward half is the 531-metre par-5 6th, which offers a great example of Marsh’s aggressive line and conservative line design. The aggressive play is to drive over the bunker perched high on the hill just left of the fairway. It is 220 metres to clear the sand, from the back tee, and a drive hit on this line will bound down the far side of the hill to leave a genuine chance at hitting the green in two shots (if you feel you can dodge the seven bunkers surrounding the green). Play to the right of the fairway trap and the downslope is less severe, as is the metres added to length of your drive. Shorter hitters may have to consider laying-up short of a creek or some of the cross-bunkers that lay beyond the water.

North Lakes plays slightly shorter than the scorecard length suggests as the neatly trimmed couch fairways generally offer some run, which can be good and bad. I found this out several times during the round as several drives ran further than expected and into a strategically-placed fairway bunker.

I really got found out on one of North Lakes’ most memorable holes – the terrific short dogleg right par-4 12th hole. From the back markers, fairway bunkers lay 241, 244, 258 and 277 metres from the tee and either side of the right turning fairway. Thinking they were all out of range, I flushed my driver right into the second bunker and was faced with a short iron approach to a green across water and more sand. I certainly could have done without the roll on the end of that drive. Long hitters, very long hitters, can launch one for the green at the 12th as the hole measures 330-metres from the championship plates but it is a 290-metre carry, mostly over water, from the same tee to the centre of the putting surface. 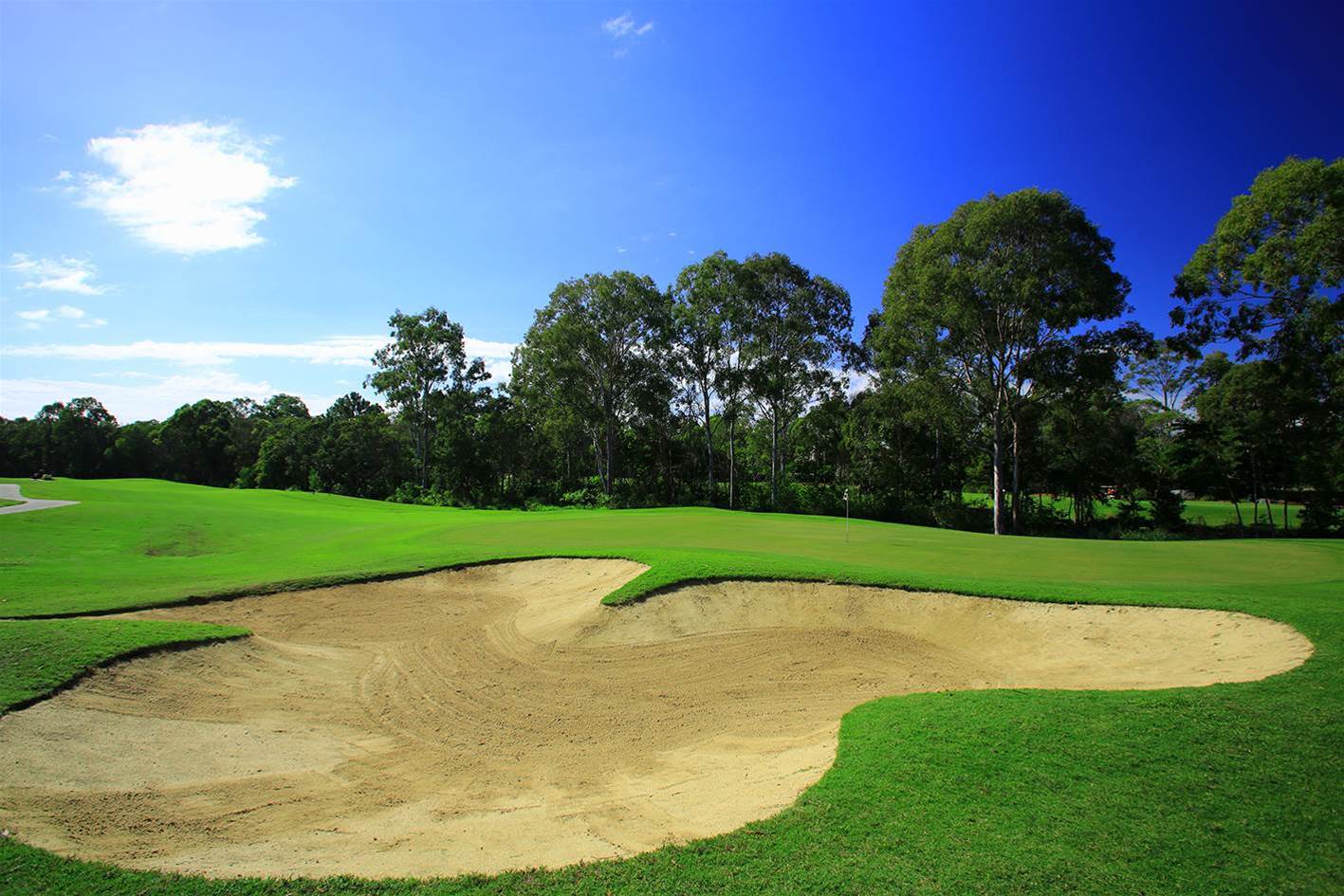 By the time you reach the back nine, you will have had enough experience on North Lakes’ greens to realise they are something special. North Lakes was the first Australian course to use Tifeagle Bermuda grass on its greens. It is an impressive surface with a finer leaf than other Bermuda grasses like 328 and Tifdwarf. Tifeagle is ideally suited to Brisbane’s climate and it has been genetically engineered to withstand the effects of drought and disease better than its predecessors.

During my visit the greens were superb. They were running at a good speed and rolling true as well as being receptive to all approach shots. I was surprised to learn at the completion of my round that all the greens had been renovated a month earlier as there was barely a mark on them.

North Lakes was ranked No.83 in Golf Australia’s Top-100 Public Access Courses earlier this year, which was a drop from its No.72 position in 2015. This came on the back of a dip in its conditioning but it appears this has been addressed and North Lakes hasm’t looked as good for some time. 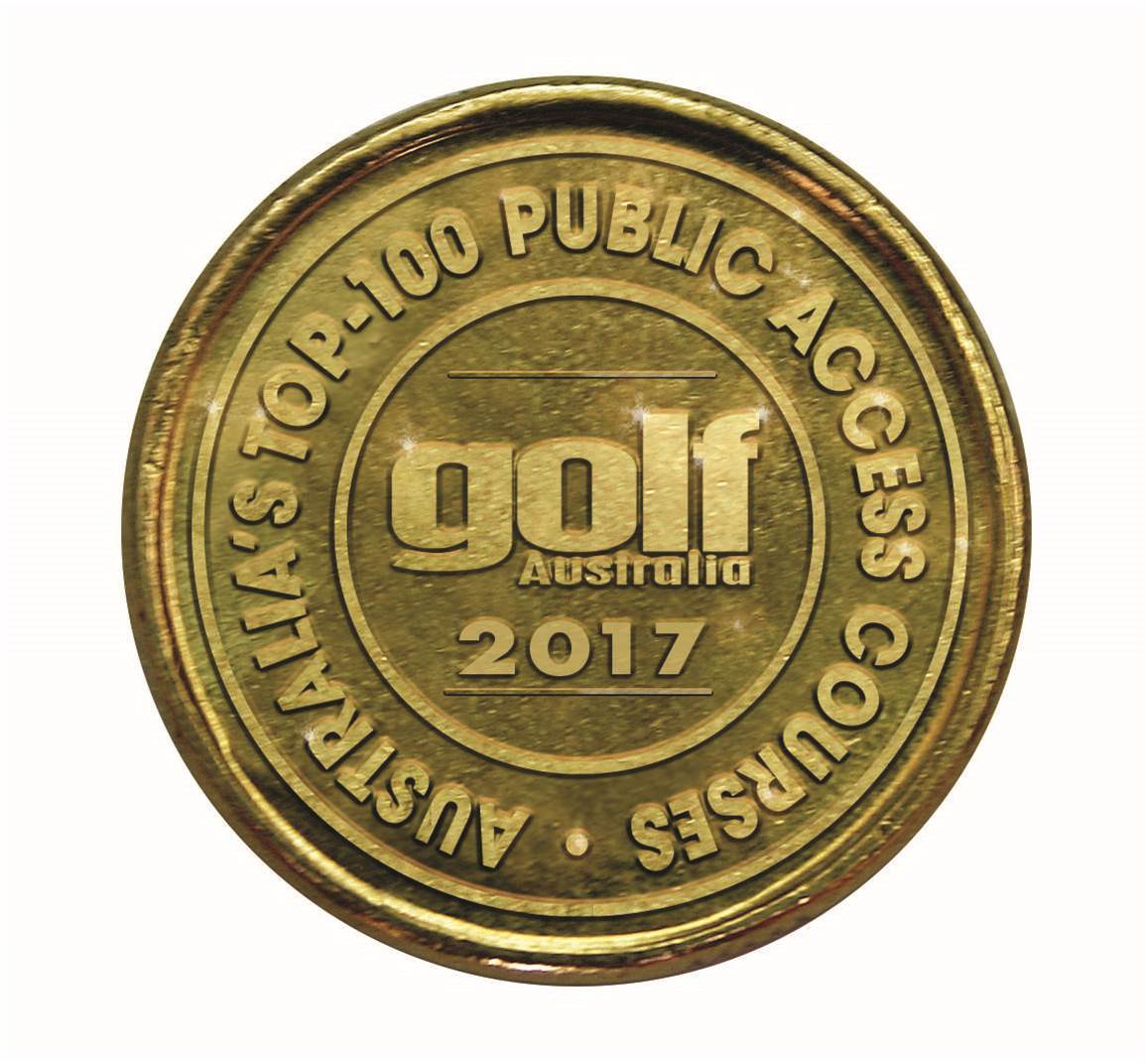 MEMBERSHIPS: North Lakes has a great range of full memberships available for all budgets starting from just $100 a month. Memberships are available in the categories of individual, family, junior, intermediate and corporate. Whether your interests are to find camaraderie, improve your game, increase time with your family or entertain clients, North Lakes has a membership product that will meet your needs.

Full membership (for less than $225 per month) includes unlimited golf and is inclusive of a cart fee (shared use), locker room access, member preferred pricing on food, beverages and selected pro-shop items.

CORPORATE GOLF: From registration to presentation, North Lakes’ staff will be at your beck and call ensuring all your requirements are met and your expectations exceeded. Your own dedicated Corporate Golf coordinator will look after everything including golf cart set up, competition organisation, scoring and, of course, all your food and beverage needs. 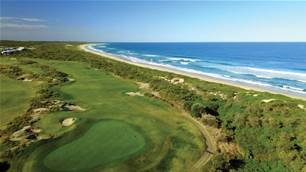