Peter Thomson long argued The Old Course at St. Andrews was the game’s most important course and all others are mere copies.

Alister MacKenzie in The Spirit of St. Andrews wrote that it was the only first-class course in the world. “There is no second and Cypress Point (bearing in mind he designed Cypress Point) comes in a very bad third.”

Gary Player once likened playing golf on The Old Course at St. Andrews to playing golf in a bathtub. “St. Andrews does not reward precision and penalise inaccuracy as consistently as a top course should – and Augusta does,” wrote Player all the way back in 1965.

His wildly simplistic argument completely missed the point of the course.

“At St. Andrews,” writes Player, “a golfer may hook his tee shot badly and still be in a position to shoot at the green.” (Perhaps best not to remember Ian Baker-Finch’s out-of-bounds hook off the 1st tee in the 1995 Open) “His opponent might bang one out 300 yards, (small ball back then!) straightaway, and discover his ball has finished on a sharp downhill lie or in a hidden sand trap.”

The ‘sharp downhill lie’ barb may occasionally be true but for those who haven’t seen it, Google will quickly find you Seve Ballesteros’ “touch of class” (Lee Trevino) one iron off the downslope at the par-5, 5th hole in the 1984 Open Championship. It was the ‘unfairness’ of the situation which gave Ballesteros the opportunity to prove why he was a better player than almost anyone else at the time.

At any championship over the Old Course the very best players will be given the occasional opportunity to show off why they are the best by being confronted with a shot only they could play. 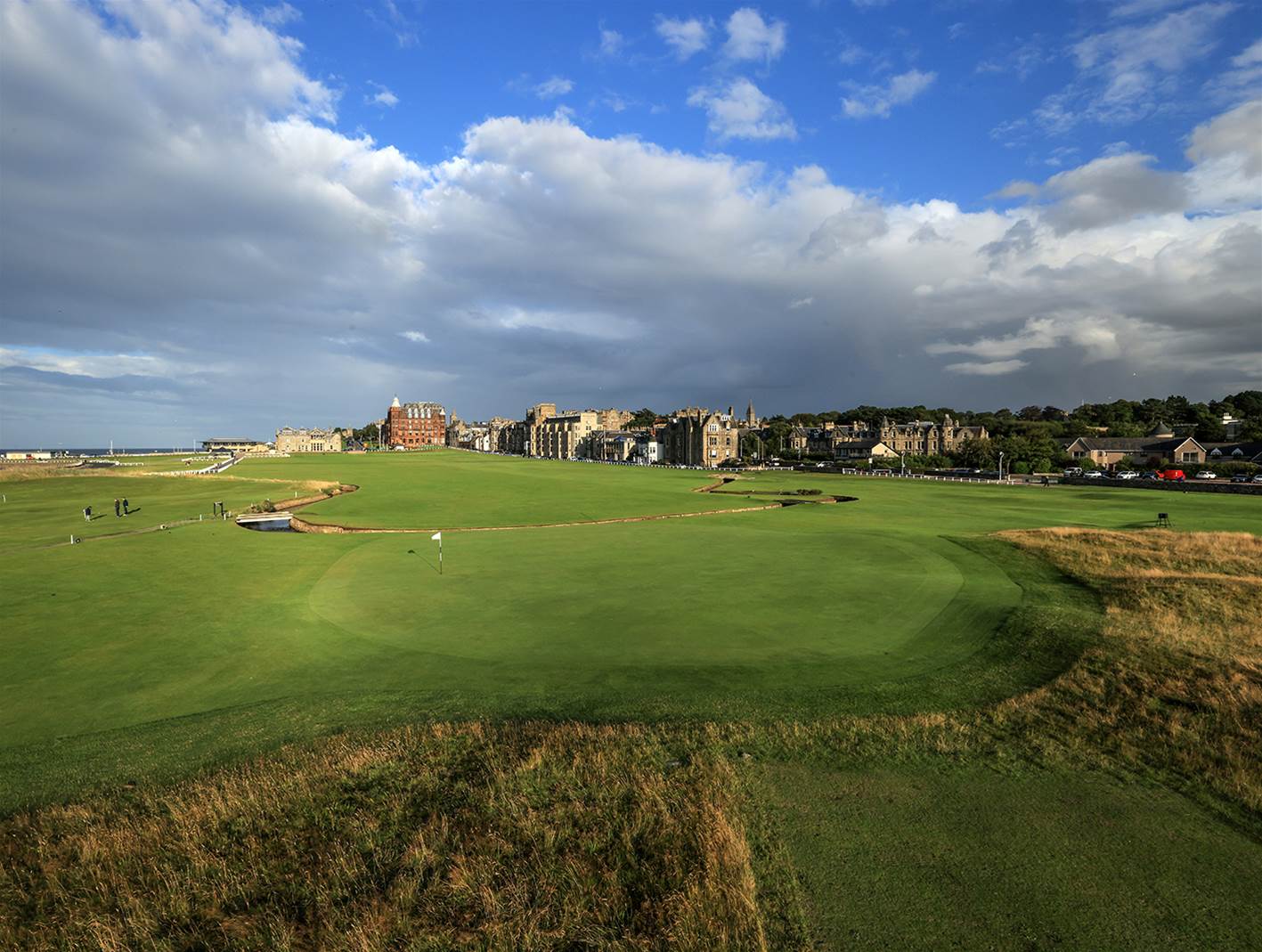 Jack Nicklaus’ drive over the 18th green in the 1970 playoff, Tiger Woods’ 3-wood into the 14th green in 2000 and Ballesteros’ 6-iron from the left rough into the 17th green on Sunday in 1984, were startling examples of shots mortals could only dream of – or certainly dream of hitting on Sunday afternoon in an Open Championship.

All of Player’s half-century-old arguments have been made subsequently by amateur and professional golfers alike used to playing courses set up to reward pure execution as opposed to the combination of execution and thought. Pure execution is an exercise in hitting straight down narrow fairways and those who stray are immediately punished by having to hack out of the rough or drop out of the water.

At St. Andrews, players are given hugely wide expanses to play into and they are free to choose their own line to the hole.

The long second shot to the 14th hole is often best played down the adjacent 5th fairway. You can play far to the left at the 4th hole and “still be in position to shoot at the green” but the bump in front of the green and the pin cut behind the left bunker makes a 30-metre putt, all the way across the green, pretty much inevitable unless you play an extraordinary shot. The 1st and last fairways are common, inviting play far to the left and away from the boundary. There are times when playing left is a good option, but the space affords the golfer the choice and choices are ultimately what makes golf interesting.

“A lot of tourists make one trip in their lives to St. Andrews, spend four hours on the Old Course without much of a clue as to what they’re looking at..." – Tom Doak.

If you drive far to the right and down the boundary line at both the 16 and 17th holes the reward is a noticeably easier shot to the green but is it worth the risk? Maybe, but the genius of both greens is every metre further left you drive the more different – and difficult – the approach shot. MacKenzie brilliantly transferred the same principle to the 13th at Augusta and the 17th on the West Course at Royal Melbourne. Both are unquestionably two of the greatest holes in the world.

Many think the mystique of The Old Course and its inseparable relationship of the most beautiful town in Scotland enhance the reputation of the course above where it otherwise deserves to be.

“A lot of tourists make one trip in their lives to St. Andrews, spend four hours on the Old Course without much of a clue as to what they’re looking at, and come away convinced that the reputation of the golf course is built on the history and tradition,” wrote Tom Doak in The Confidential Guide to Golf Courses.

The one-time visitor likely misses the brilliance of the holes themselves, many of which are amongst the best in the game. The opening hole gives even the most nervous player a reasonably free hit off the tee but put the pin just over the burn and the second shot turns up the very same nerves to another level altogether. MacKenzie replicated the principle off the 1st tee at Royal Melbourne but as it is at St. Andrews, getting the approach shot anywhere near the flag takes an uncommonly good shot. Making a hole look easy and play hard – or appear hard but play easier than it looks – is an important part of the art of making great golf and here at The Old Course is an example of a seemingly simple hole being more difficult than it appears at first glance. 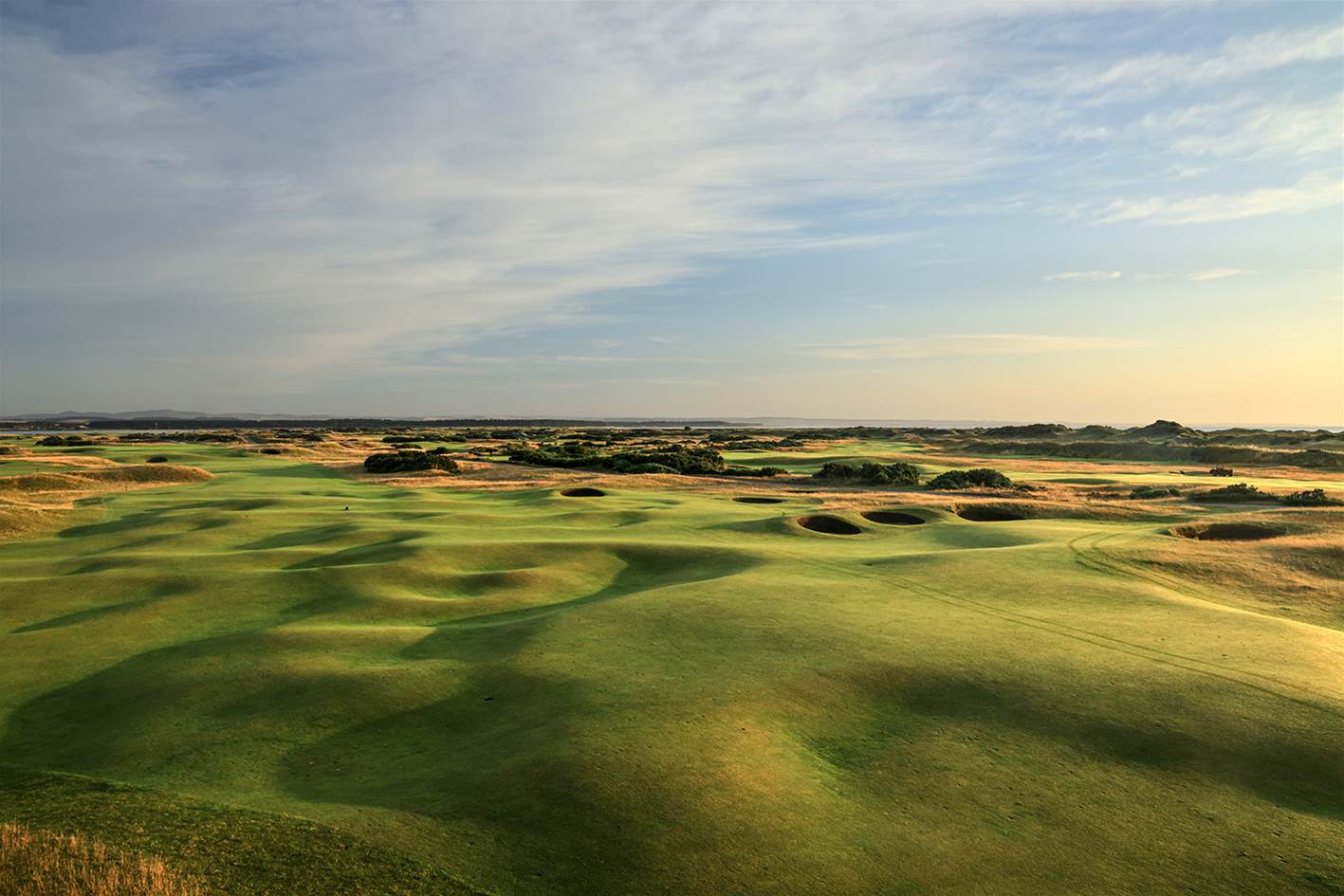 The rippled view for the second shot on the par-5 5th hole on the Old Course. PHOTO: Getty Images.

Play it once off the forward tees on a calm summer’s day to the easy pins and you might think it a simple course and wonder what all the fuss is about. Jones’ lifetime of study led him to understand this.

“No one loves that old course any more than I do, yet I do not mind admitting that under certain conditions it can be comparatively simple ... But it seems to me that the very fact that the course can be easy when it can likewise be very difficult is a virtue rather than a fault, because it is an indication of the variety that can be found there. The only course that will remain difficult under all conditions will be the one that is designed and kept for golf of a stereotyped, monotonous character, and this makes a most uninteresting proposition.” 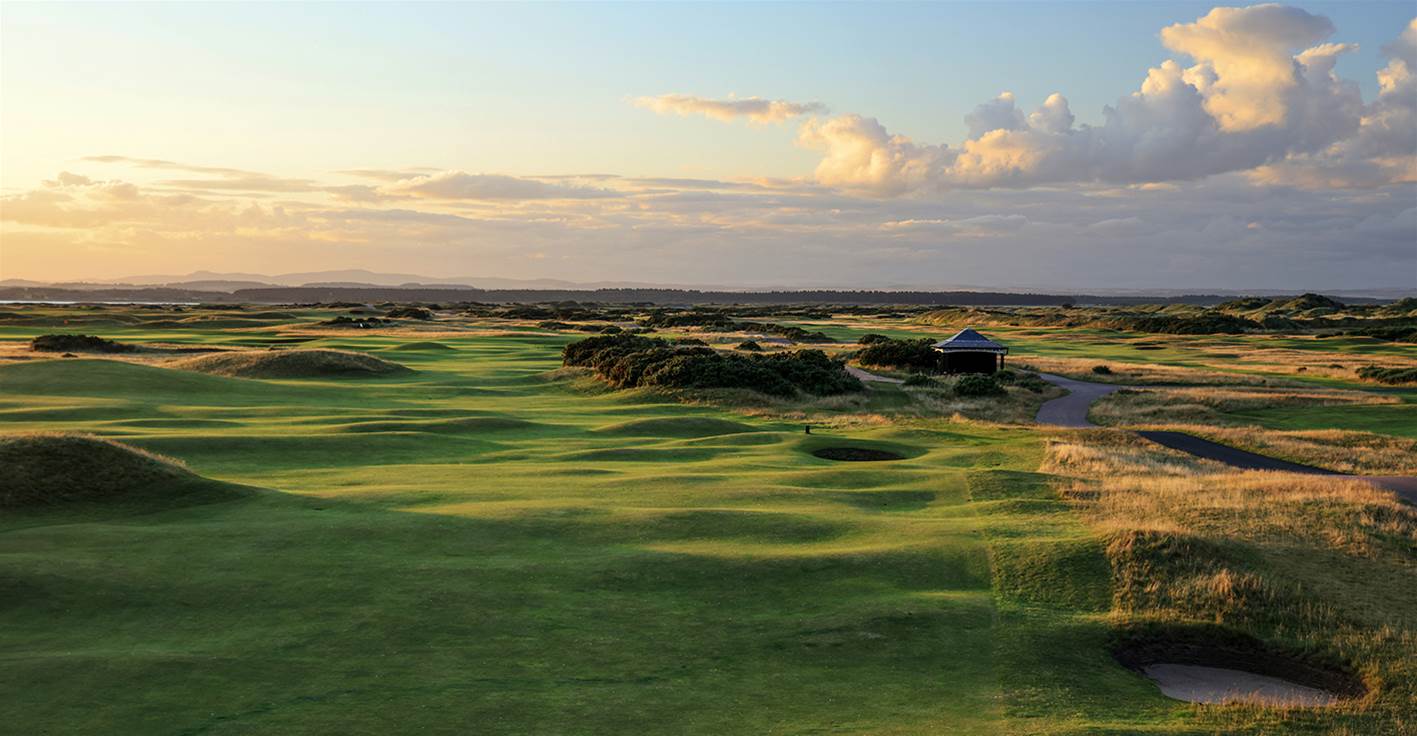 The next great hole is the aforementioned long par-4, 4th with its perfectly placed bump, but it’s the extraordinary back nine which arguably boasts half a dozen holes with a legitimate claim to being the best of their genre in the world.

The 11th – the Eden Hole – is a superb mid-length par-3 (one where the tee shot plays straight over the top of the 7th fairway) where the almost ever-present wind rewards only the properly flighted iron. The incredible putting surface of the Eden hole, with the green of the par-4 7th behind. PHOTO: Getty Images.

The next is one of the great short fours. It’s drivable but defended by pot bunkers both blind from the tee and on a direct line to the hole. If anyone built it now, it’d be decried as an “unfair” and “ridiculous” hole with bunkers “catching my perfect drive”. Of course, if the measure of a perfect shot is its position relative to the next one then jamming your ball up the face of a tiny pot bunker and having to pitch out backwards is an odd measure of a ‘perfect shot’.

Into the wind or with the wind behind it’s an utterly confusing hole because the right shot to play off the tee changes wildly depending on the conditions – and come Sunday afternoon in The Open and it’s one of the few legitimate chances to make a birdie. But as all great short fours do, the only way to make a bogey is to try and make a birdie because two safe shots avoiding all the trouble all but guarantee a four and a player two shots ahead is confronted with a different dilemma from the man two shots behind. 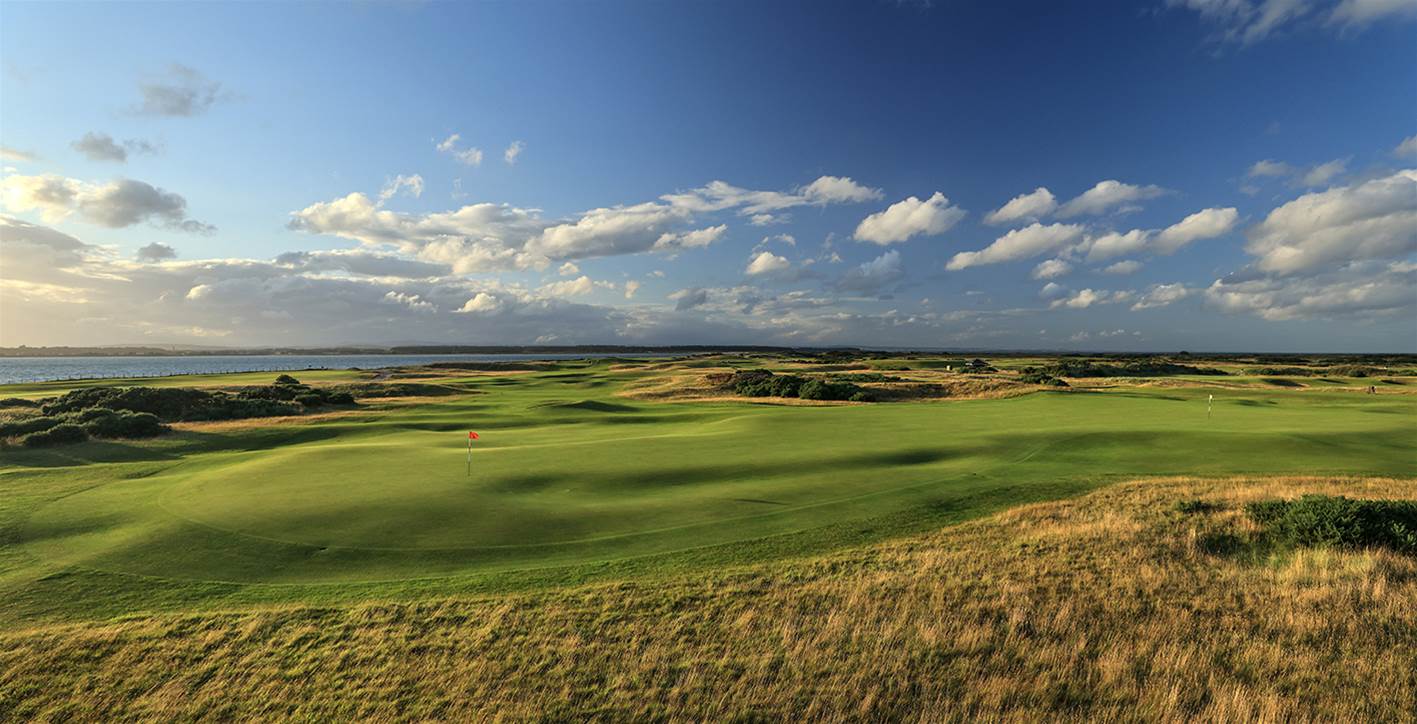 If a course architect built the short par-4 12th today, they might end up in a straitjacket. PHOTO: Getty Images.

The 13th is one of the great long par-4s and it’s not even the best long four on the back nine – an honour reserved for the 17th.

It’s followed by the best par-5 in the game but if you want to argue Augusta National’s 13th you can mount a decent enough case. Either way, both are in the finals. The boundary fence is a constantly nagging presence from the tee but fly safely left and the fearsome Beardies bunkers lie in wait. Peter Senior was in them once in a practice round and Peter Thomson was nearby. “How do you play out of here?” asked Senior. “Not sure, Peter, I was never in them.”

"The finisher might not be the best 18th hole in the game – perhaps an honour reserved for Pebble Beach – but it’s absolutely the best setting in the world to finish a round of golf." – Mike Clayton.

Maybe he was and maybe we wasn’t, but they are most assuredly best avoided. From there the real fun begins and if they build a tee 300 metres from the green it’d be the best 300 metre hole in the game.

That the tee shot is so brilliant makes it the best long hole in golf.

The 16th is one of the great medium-length two shotters where the Principal’s Nose bunkers in the middle of the driving area (a bad mowing line – one which disgusts my fellow columnist, John Huggan – means they are now, no longer, in the middle of the fairway) dominate the strategy off the tee. You can flirt with the stone wall and the narrow-ish fairway on the right, but few are sure of not blocking it too far and over the fence. The closer to the fence, however, the easier the approach and it’s a shot that looks wildly different from the right than it does from the left.

The Road Hole is the most awesome of long two-shotters and, like the 12th, an example of a hole if anyone built it today, they’d be certified. The only madness is the ball now goes so far that the tee isn’t on the golf course but rather on the other side of the boundary line just to the right of the 16th green.

The finisher might not be the best 18th hole in the game – perhaps an honour reserved for Pebble Beach – but it’s absolutely the best setting in the world to finish a round of golf. Much like the 1st, it’s a simple looking hole but if a hole is measured by the extraordinary history, it’s both witnessed and produced, then few are in its class.

And as MacKenzie said almost a century ago, nothing is in the class of The Old Course.

Clayton: Designing in the field