Thomas Bjørn committed all of his energy and focus to capturing the Ryder Cup at Le Golf National during his near two-year tenure as Europe’s captain. Now, with that mission accomplished, the Dane is back to thinking about his own game and future for the first time in a long while, as we found out from the man himself.

Under the watchful and vigilant eye of putting coach Phil Kenyon, Thomas Bjørn was hard at work on the practice green three days before last week’s Turkish Airlines Open. Tees were in the ground, four creating a path for the putter head, back and through; one more to make sure his backswing wasn’t too much on the inside. And it was working. The 47-year old Dane was knocking them in from six-feet or so with a monotonous regularity. Most striking, however, was Bjørn’s grip on the club. Both of his hands were hole-side of the shaft, his right hand gripping his left forearm, his left hand actually on the club. It was, at least for this witness, another variation on the ‘claw’ grip that has saved so many professional golfers from the clutches of the dreaded yips.

RIGHT: To overcome his putting woes, Bjørn has implemented a new putting grip, where only his left hand is on the club. PHOTO: Getty Images.

“My putting grip has changed,” he acknowledged. “I ran into a quite severe case of excessive movement in the right hand. So I had to do something. Which was difficult because I wasn’t practising. And because I wasn’t hitting the ball that well, I was depending on holing some putts. Which wasn’t happening. So I had to find something. It just takes my hand off the grip completely. And it is better than it was.”

All in all then, Bjørn was talking, looking and acting just like any other player on the European Tour. Which is what the 15-time winner is, of course. For the first time in two years, the now former Ryder Cup captain is back to what he has done for the last 25 years of his life – playing golf for a living. No more is his active mind occupied by thoughts of wild-card picks, course set-ups and potential foursome partnerships. Done and dusted.

“My putting grip has changed … I ran into a quite severe case of excessive movement in the right hand. So I had to do something.” – Thomas Bjørn

In the month or so that has passed since Bjørn’s European side gave those pesky colonials from across the Atlantic a right good seeing-to at Le Golf National, he has played in two European Tour events. A missed cut at the British Masters was followed by a lowly T-58 finish in the Andalucía Valderrama Masters. Just about what you’d expect from a man who has played so sparingly and with so many distractions over the last couple of years.

Which begs the obvious question: what’s next for Thomas Bjørn?

“Yeah, what is next?” he asks with a smile. “I’m not sure to be honest. I said all through my captaincy that my focus would be 100 percent on the 20 months leading to the Ryder Cup. The 12 members of the team – and those who didn’t quite make it – deserved that from me because they put so much into qualifying. Now, I want to take a bit of time to hit a few balls, play a few tournaments and just kinda see where I’m at in my head. Television work is one of the options the Dane is considering for the future. PHOTO: Getty Images.

“The best place for me to do that is out on the Tour. I’ll play a bit until the end of this year and a bit more early next year. It will be nice to prepare somewhat properly. When I did play over the last couple of years my preparation was constantly taken away from me. I had no chance to get down to some real work. There was always something else in my mind. So I just need to play a bit of golf and practice hard.”

As a measure of how much work is ahead of Bjørn, his best finish during his time as European skipper was T-15 at last year’s Scottish Open. This year his only foray into the top-30 has been T-30 in Abu Dhabi way back in January. Since then, his level or pre-occupation elsewhere has been obvious – nine missed cuts versus seven made. “I lost my competitiveness through neglect really,” he says. “And through getting older I am losing speed. The only way to maintain that is through staying ‘golf fit.’ And the way to do that is by hitting balls. I’ve lost a bit of speed and some strength. It got to the stage where it felt like, when I was hitting a 5-iron, everyone else had a 9-iron in their hands. When that is the case, you have to play ridiculously well just to be competitive. It’s like banging your head against a wall really.

“Plus, I am at a potentially awkward age for any pro. But if I am careful about where and when I pick and choose to play I can still be competitive.” – Thomas Bjørn

“Plus, I am at a potentially awkward age for any pro. But if I am careful about where and when I pick and choose to play I can still be competitive. There are still courses that are not all about distance. Although there are a lot where, if I play my absolute best, 20th is about all I can hope for. That is my reality. So for guys my age playing the European Tour can be just about preparing for seniors golf. I don’t want to do that though. I still want to play the main Tour and I still feel like there are other options available to me within the game.”

One thing Bjørn will have to do is take part in is the selection of his successor. Along with his immediate predecessors, Paul McGinley and Darren Clarke, and David Howell, chairman of the European Tour tournament committee, and Tour chief executive, Keith Pelley, he is charged with naming the next guy, probably within the next three months or so. Early indications are that Padraig Harrington is the strong favourite to take charge at Whistling Straits in 2020, with Lee Westwood the likely lad for 2022 in Italy. Which is not to say Bjørn had much to offer other than an enigmatic smile on those subjects. But, on the other hand, he wasn’t denying anything either. Besides, he has other stuff to think about. And options to consider.

“I could do some course design,” he mused. “I could do some television. And I can easily see myself doing some work for the Tour. I’ve been so involved in that for so many years. So I have a great insight into what the Tour is all about. The new leadership is trying to make a lot of new things happen. Which is great. But we also need to remember what we are and not get too far ahead of ourselves.

“On the playing side, I just want to get to a point where I can keep my card next season. Then maybe think about making it to Dubai at the end of the one after that. At my age that is a fair target. But I will have to commit myself to playing full-time. And I’m not sure that will be the decision. I’m exempt until I am beyond 50. I have four years at least through the various categories on the career-money-list. It can get expensive though. I don’t want to be turning up just to spend money. But right now, I just want to play some golf.” 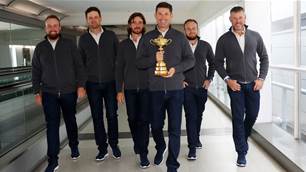