Once a touring professional hangs up the clubs they take a wide range of paths, many understandably away from the game that has been the chief focus of their life until that point.

Others remain in golf and forge careers in teaching the game, selling equipment, managing players, or in the case of Ewan Porter commentating on their former peers.

The two-time Korn Ferry Tour winner becoming a respected voice in commentary teams both at home in Australia and overseas, his extensive research and understanding of the game at the top tier proving a popular mix.

Outside of his new job in the game however, Porter has also turned his focus to the next wave of players, inspired by honouring the memory of his late father Norm.

Beginning in 2019 with a single event at his former home club of Cronulla in Sydney’s south and played for a trophy bearing his Dad’s name, the Adidas Golf Junior Sixes Invitational is now a series of events set to kick of next month. Even with constant schedule tinkering and tournament cancelations caused by the COVID-19 pandemic. 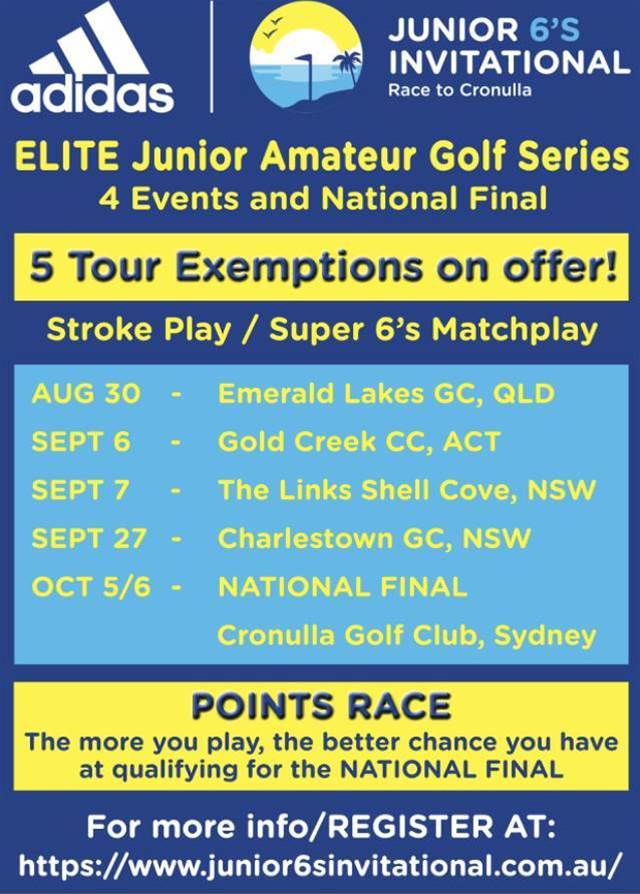 Beyond simply adding to the tournament schedule for junior golfers around the country, the series offers a number of professional tournament exemptions to its boys and girls winners, including the NSW Open for both, Northern Territory PGA and Gippsland Super 6 for the men as well as the Australian Ladies Classic and Blitz Golf Pro Series Adelaide, in addition to Adidas scholarships for the two series winners.

But why would a successful former Tour player with a burgeoning media career focus on juniors?

“I guess for the last few years I had been wanting to put together a junior tournament, really since I stopped playing, but if I did it, I wanted to do it properly. I didn’t just want to have an 18-hole junior tournament for a $50 voucher because there is a million of those. I wanted to do something different and something sustainable,” Porter recently told Golf Australia magazine from his temporary Sunshine Coast base.

“Then towards the end of 2018 when I lost my Dad, that was really the catalyst for me to do what I had wanted to do and honour my Dad’s legacy. He was a big supporter of mine not just with junior golf but with every sport that I ever did. I have so many fond memories of Dad caddying for me at junior events and obviously Mum as well. But losing Dad it was a way to honour him and have his name on the trophy.”

Tournament founder, @ewanports, had the opportunity to speak to one of golf’s ultimate role models, Adam Scott, about the amazing pathways being afforded to junior golfers in this year’s Junior 6s series. @adamscottofficial 📺 Check it out and watch the full video on IGTV!

A decision to focus on both boys and girls a fairly straightforward one for Porter.

“For me it was a no brainer really. It was never going to be anything else, there was always be boys and girls,” the 38-year-old said.

Cronulla will once again play a pivotal role in 2020, with the club set to host the national final of the series that is in the mould of the European Tour’s Race to Dubai or PGA Tour’s FedExCup.

And like in its inaugural year, the series has support from all the right places when it comes to golf in this country.

“Golf NSW and Jack Newtown Junior Golf and the ALPG and the PGA of Australia all supported and got behind it because they liked the idea of not just supporting the next generation but providing pathways,” says Porter who like so many has had his personal plans for 2020 completely upended by coronavirus.

“I saw an opportunity there to create a different style of pathway. My idea was the Australian Junior Championship has always, and should always be, the most prestigious junior tournament in Australia, but as far as creating further opportunities and different opportunities I needed to get the support of all the aforementioned associations and bodies and thankfully I did.

“Last year everything went very smoothy and was very successful and obviously you’ve got to step outside your comfort zone if you are going to expand it, and I saw an opportunity this year and beyond to not only have a one off tournament at Cronulla, but create a national series and this year the format is very similar except this year in the sixes portion we’ve got the boys and the girls playing against each other with the girls playing from scaled tees 86 percent the length of the boys.”

The expansion from a standalone event to a series has also seen a number of prominent ambassadors sign on to be part of Porter’s vision. Included among them golfers such as Adam Scott, Lucas Herbert and Viktor Hovland, while other sportspeople like Usman Khawaja and Braith Anasta have also leant their support. This endorsement far more than just the former top-300 player in the world calling in a favour from his mates.

@herbznspices_ won this year’s @omegagolfdubai Desert Classic and he currently sits 3rd on the @europeantour Race to Dubai. Lucas has very kindly put his hand up to be an ambassador of the @adidasgolf Junior 6’s Invitational and I asked him about the support he’s received from Adidas in his career so far. @junior6sinvitational @pgaofaustralia #golf #australia 🇦🇺⛳️

“They are all very recognisable figures and still very relatable to the junior golfers because they are all idols of theirs and they’re not just friends of mine either they’re idols of mine too, I don’t just love the way they play golf, but they are top quality and people and role models as well.

“There is a lot of really good golfers out there in the professional game who probably aren’t the best role models and that is part of why they are terrific to have as faces of our series.”

Without question the most noteworthy ambassador is Masters champion Scott, who Porter played golf with numerous times during the former’s PGA Tour hiatus over recent months. The two reminiscing on Scott’s back-to-back Australian Junior Championships that earned zero professional starts for burgeoning star, something Porter’s series offers in spades.

The opportunity to play alongside the pros is an extremely eye opening one for the elite juniors set to tee it up in the Junior Sixes series, and one that could potentially see a young player secure playing rights with strong performances that would leapfrog them ahead of their contemporaries.

This is arguably one of the series greatest strengths. However, Porter also notes that the juniors he is now so involved with have his full support if a career in the dog eat dog world of professional golf is not their end goal.

Plans to expand the series internationally are in Porter’s sights as well going forward, with an association with Brandt Snedeker and his Sneds Tour in his home state of Tennessee among the wide range of potential options. However, given the current climate, all attention is focused on 2020 and perhaps emulating Jack Newtown who has played a crucial role in the development of many of our current stars.

"At the end of the day all I want to do is do something that my Dad would be proud of and create opportunities for the kids.” - Ewan Porter

“I think we have been very lucky in Australia, and one of the main reasons we have produced so many good golfers over the years, is we have had great junior golf programs. I mean the weather and the affordability of golf here is a definitely a cause, but the fact that the Jack Newtown Junior Golf Foundation I think it started in 1986 and pretty much every Australian Tour player from that point who has won in America has come through the foundation in some respect.

“But there has been this opportunity to create this season long series in Australia to not just get the kids excited but to have those opportunities in their career going forward.”

Porter’s second life in golf broadcasting, just like Newton before him, is one that deserves praise. He has shown commitment to learning a new craft, whilst putting his own unique stamp on it.

However, his dedication to helping and developing the next generation of elite golfers in this country deserves even more plaudits that will certainly come the way of the once promising prospect himself. Even more so when considering the reasons behind it.

“I think really it all comes back fundamentally that I wanted to do something to honour my late father and that will always be the underlying aspect of the junior series and they play for the Norm Porter memorial trophy, but after that event last year I saw an opportunity to expand, and I see further opportunity to expand it internationally.

“At the end of the day, in my opinion, if you doing things for the right reason you will reap the rewards in the end and I know deep down that myself and the few others involved aren’t doing it for any money, in fact we are putting our hand in our own pockets to ensure it goes ahead.

“Whether or not we make money on it going forward is neither here nor there, at the end of the day all I want to do is do something that my Dad would be proud of and create opportunities for the kids.”

To find out more about the Adidas Golf Junior Sixes, visit www.junior6sinvitational.com.au

Catch me if you Cam, as Smith leads Open