Five-time Open Champion Peter Thomson once described Long Reef as occupying “one of the best sites of any golf course in Sydney.”

Anyone who has visited the layout could hardly disagree with Thomson, whose course design career spanned more than five decades and saw his portfolio of new creations and major redesigns exceed 250 worldwide. It was during the mid-90s when Thomson and design partners, Mike Wolveridge and Ross Perrett, were commissioned to make the first significant architectural changes to the course since World War II. His description of the site came after he surveyed the links land from the highest point of the Long Reef headland, with all the holes laid out below. Left and right were longing postcard views to world-famous beaches – Manly to the south, with Collaroy and Narrabeen to the north.

Thomson, however, was not the first course designer of champion-playing pedigree to be seduced by the quality of the site.

This year marks the centenary of the Long Reef club’s formation, which began as little more than a short nine-hole course with a tin shed clubhouse (on the same site as the current clubhouse) where the only real amenity was running water. By 1927, the club was looking to expand its horizons and extend the course to 18 holes, incorporating more land on the lower stretches of the headland. At sun rise. every mound and hollow is highlighted on the long par-4 17th hole. PHOTO: Brendan James.

Carnoustie-born Dan Soutar – the 1905 Australian Open Champion and designer of the acclaimed original layouts at Kingston Heath, Concord, NSW and nearby Elanora – was commissioned to oversee the creation of the links layout, alongside the club’s resident professional, Frank Eyre. Eyre also won our national open in 1930, a year before he and Soutar completed the course extension and the full 18 holes was opened for play.

During World War II, extensive damage was done to the course as a result of the army using the land as an artillery range, although golf continued to be played on non-firing days across a shortened course.

Long Reef is not long by modern standards but what it lacks in length is more than made up for by the wind, which is hardly surprising given how exposed the course is to the elements.

The renowned architect Eric Apperly was called in to ‘fix’ the course after the war (a job he also undertook at the NSW Golf Club) and it remained largely unchanged (except for the addition of the current 1st and 2nd holes) for five decades until Thomson arrived.

He oversaw redesign work, which included the addition of pot bunkers, mounding and more dramatic green complexes. Wetlands, which had been drained to make way for the construction of Soutar and Eyre’s design, were reinstated, which enhanced the beauty and challenge of the holes bordering the hazards. In more recent times, the course maintenance facility was moved from the centre of the course and a lake was added to the location. The 12th green is surrounded by sand, while the 13th green has sand and out-of-bounds to worry about. PHOTO: Brendan James.

Today, Long Reef is ranked No.31 in Australia’s Top-100 Public Access Course by Golf Australia magazine. It is a beautifully manicured layout with some of Australia’s best kikuyu fairways and Poa Annua greens, which is a credit to course superintendent Peter Donkers and his team. The wide variety of holes offers a fun and challenging round, with both traits heavily influenced by the weather conditions of the day.

Long Reef is not long by modern standards but what it lacks in length is more than made up for by the wind, which is hardly surprising given how exposed the course is to the elements.

The prevailing wind at Long Reef, at least in the cooler months, is predominantly from the south and is right in your face as you stand on the tee at the 1st hole – a 450-metre par-5 that calls for the toughest tee shot of the round to also be the first. Out-of-bounds markers are just metres from the right edge of the fairway, which is cut in two by a narrow creek about halfway to the green and can be reached by longer hitters, especially those that favour the left half of the fairway. Once you have crossed the water hazard, the fairway climbs gradually to a sloping greentucked in behind a bunker left and a grassy mound to the right.

One hole that has remained unchanged for many years is the 315-metre par-4 3rd. It is a classic sharp dogleg left that easily tempts the big hitter in trying to reach the putting surface with their drive. But this diminutive hole has ruined a good start to many rounds with scrubby bushes left and deep rough to the right catching mis-hit tee shots. The ideal play is a long iron or fairway metal struck toward the target marker through the end of the fairway. This will leave a short iron into the two-tiered green protected by a deep bunker cut into its front edge. While the entire course is certainly exposed to the elements, the highest reaches of the layout across the top of the headland are certainly more affected by the wind. No hole is more affected by the wind than the 138-metre par-3 13th, which plays to the south. In the cooler months, Long Reef’s shortest par-3 can demand a wide range of clubs be used from the tee to find the green, depending on the strength of the wind. It is not uncommon for players to use a driver when a big southerly buster is howling up the coast. In such conditions, the key is to keep your ball on the golf course as a sheer cliff above the ocean is just metres away from the left of the green. In summer, the cooling nor easter can make even a wedge or 9-iron tee shot difficult to hold on the green.

Two of the hardest holes at Long Reef come late in the round. The 415-metre par-4 16th plays much shorter than the scorecard suggests as it descends from the highest point on the course to almost the bottom along the southern edge of the headland. Out-of-bounds and Long Reef Beach lie to the left of the fairway, which features dramatic mounding left and right. A series of ripples and undulations across the fairway also complicate the lie for the downhill second shot into a simple, round bunkerless green, which features steep drop-off slopes long and right of the putting surface. Two lakes at the corner of the dogleg par-4 5th, forces you to choose your club wisely on the tee. PHOTO: Brendan James.

The 400-metre par-4 17th hole, which is usually played with the wind blowing straight across the fairway from left-to-right, is a testing driving hole as out-of-bounds looms just beyond a long row of dunes lining the left edge of the narrow fairway, while extensive and dramatic mounding right of the short grass makes hitting the green in regulation a tough assignment. When the wind is at its strongest, golfers must aim at the beach to get have any chance of finding the fairway with their drive.

The testing 17th hole would not be out of place on one of the great links courses of Ireland, like Portmarnock. Instead, it is just 30 minutes’ drive north of the Sydney CBD. 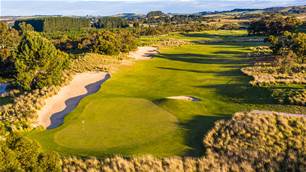