The European Ryder Cup Captain turns 50 in August and has reserved aspirations to play the Champions Tour. Here, he reveals his dream of inspiring Tour pros of his generation by winning a fourth major and what it will take to win the Ryder Cup on US soil later this year.

How much does the course come into who gets picked? As soon as I saw the course in Paris last time, Thomas Bjorn’s picks made perfect sense.

The whole management thing is interesting. Just because I can play golf doesn’t mean I can manage. With wife, Caroline, and the Ryder Cup he hopes to retain as the European captain. PHOTO: Getty Images.

McGinley broke the mould on that, to an extent. He got the job because it was felt he would be a great captain. He didn’t get it because he was a great player.

That’s right. But they really picked him because he told them he was going to be a great captain (laughs). He did an unbelievable job spotting that window of opportunity. But he delivered. Fair play to him.

It is actually going to be tough for the guys coming after me. We have a number of players, who have been successful in Ryder Cups who will want the job. But there isn’t enough room for all of them. Some notable names are going to miss out. And McGinley broadened the scope of who could be captain. So just being a great Ryder Cup player isn’t quite enough anymore. Being a major winner doesn’t necessarily mean you are going to be a Ryder Cup captain.

It’s a good problem to have though. It’s important to Europe that we get the best captains. But some guys are going to be disappointed.

Without mentioning any names, there have been one or two bad European captains along the way.

True. Monty was actually the one who put most on the line. His career was, to a large extent, defined by his record in the Ryder Cup. He never lost a singles match. The Ryder Cup was, and is, a big deal for him. He can hold his head high in any Ryder Cup conversation. But if he had been a losing captain that would have been diminished. I think Ian Poulter will have similar thoughts when, and if, he goes down that road.

One last question. Ireland has produced an extraordinary number of major wins over the last 15 years or so. Any explanation?

Every wants to know the answer to that question. But if we knew, we would repeat whatever it is. It’s cyclical though. There were more Scots than Irishman playing in the Irish Open in 2020. Yet, if you look back only a few years, it was clear that Ireland was doing so much better than England. There was outrage. Look at the English now. These things ebb and flow.

As regards the majors, my personality meant I had the ability to not believe in any sort of barriers. I’m not sure what it is about me, but I never thought there was a limit on anything I could do on the golf course. Not ever. But the Irish pros who went before me – even the better ones – didn’t have that same belief. If they were leading in The Open early on, they never believed they could go on and win.

I didn’t have the preconception that an Irish pro couldn’t win. I didn’t see it like that. I just played. And by me winning, it opened the door. Michael Campbell winning the 2005 US Open helped me. I saw him winning and I thought if he could do it, so could I. A great day for the Irish, winning the 2010 Ryder Cup at Celtic Manor in Wales. PHOTO: Getty Images.

Didn’t losing at Winged Foot in 2006 also help in that regard?

It did. Losing there convinced me I had the formula to perform at my best and win at the highest level without getting lucky. Before that, I thought I would need an outlier week where I would hole everything and win.

At Winged Foot all I needed to do was par the last three holes. But it was me doing it. It wasn’t an out-of-body experience and that gave me the confidence. No one told me I wasn’t allowed to do it and Michael’s win proved that to me.

If you look at Tiger winning, he’s up on a pedestal. And it was the same with Michael Jordan … Bob Rotella told me this story. A lot of players think Jordan is their hero, so they sit down and watch tape of him at his best. Then, Bob tells them to watch it again and look for all the mistakes he makes and they are everywhere.

But you don’t see mistakes when you watch Tiger winning a major – not when he is your hero. But they are there. And when I see Michael winning, it’s like it’s me.

Then, when I did it, the other Irish lads had the same feeling. They had all played with me. They could see that they could beat me. Seve did the same thing for the European lads back in the day. He convinced (Sandy) Lyle, (Nick) Faldo, (Ian Woosnam) Woosie, Langer and (Jose Maria) Olazabal that they could win too. They knew they could beat him on their good days.

I did that a bit for the likes of Martin Kaymer. I was there. I was accessible. I was real. It wasn’t as if I hit the ball 50 yards past everyone. I was far from perfect tee-to-green. I was “normal.”

Look, I know that is less true for someone like Rory (McIlroy). He’s a superstar. I have a feeling he would have won a few anyway (laughs). But I’m sure Graeme McDowell and Darren and Shane (Lowry) drew confidence from me winning. I made it real for them.

It’s all psychological and when I win a major at the age of 50, other 50-year-olds will think they can do it too (laughs). 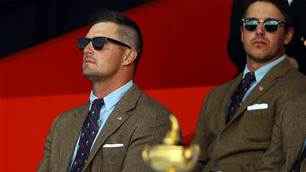 Postman Poults out to deliver in Ryder Cup