Lonsdale Links features template holes and square-cut greens as a deliberate throwback to an earlier, golden, age of course design. But it also possesses plenty of its own character and is destined to feature in the national rankings for years to come.

Ask any golfer who has visited the aptly-named Bellarine Peninsula in Victoria and it won’t be long before they’re heaping praise on the courses to be found in the golf-rich region.

Well, Lonsdale Links is the latest addition to the list of ‘must-play’ layouts in the area and boy, does it hold its own against the heavy hitters of the Bellarine. 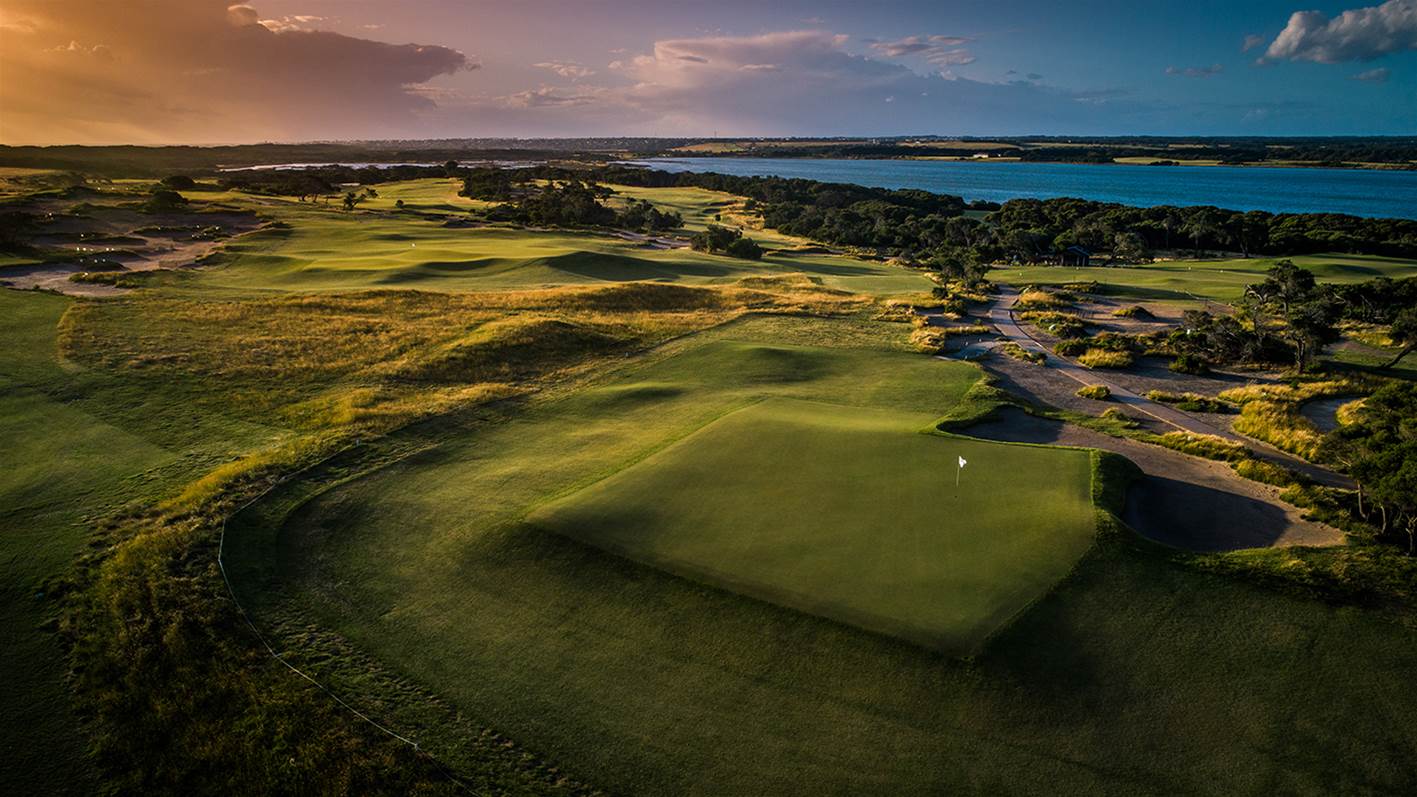 The square greens at Lonsdale Links give the course a point of difference on the Bellarine Peninsula. PHOTO: AirSwing Media/Nick Wall.

The new design meanders its way around salt marshes and wetlands and has been laid out across coastal dunes next to the picturesque Lake Victoria. The 5,505-metre par-70 course is relatively short by modern standards. But its links qualities mean that it is anything but a pushover, with fast, bouncy fairways, constant winds and challenging green complexes sure to test even the most accomplished player.

The multi-million-dollar project saw the club build a new clubhouse, create its own par-3 course – called Mulligans – sell off part of its land to develop real estate and acquire neighbouring farmland to accommodate the new layout.

The most intriguing aspect of the redesign, however, has been the use of template holes, having drawn inspiration from their use by famed American golf course architects Charles Blair Macdonald and Seth Raynor, during the ‘Golden Age of Course Design’ in the 1920s. Born in Ontario and raised in Chicago, Macdonald studied at the University of St Andrews in Scotland during the mid-1870s and quickly became enthralled by the game of golf, playing rounds with Old Tom Morris and his son, Young Tom. He paid further visits to the British Isles in the early-1900s, having designed the first 18-hole course in the United States – Chicago Golf Club – to study and sketch what he considered to be the world’s best golf holes.

Upon returning to the States, Macdonald used some of the “model” holes he had identified during his travels to create the world-renowned National Golf Links of America, which opened for play in 1911. The fairway bunker on the 18th hole resembles the ‘church pews’ bunker at the famed Oakmont. PHOTO: AirSwing Media/Nick Wall.

Lonsdale Links is nearly 17,000 kilometres away from the National Golf Links of America. But elements of Macdonald’s templates and the holes that inspired them can be found throughout the OCM redesign.

“We really wanted to do something a little bit different down here, mainly because of the surrounding competition, with Thirteenth Beach and Barwon Heads, as well as Curlewis not too far away,” lead architect Ashley Mead told Golf Australia magazine.

“The more we thought about it, and the more we cleared the non-native trees off the property to reveal the dune land, the more we thought the site resembled that of the National Golf Links of America, which we studied in 2012. It has some low salty wetland areas, views across the lake and rolling dunes, so it gave us some inspiration and that sort of evolved into creating a similar style course to what the architects Macdonald and Raynor had created in the early 1900s.”

Importantly, Lonsdale Links and its template holes have been dictated to by the land and are merely inspired by Macdonald’s work. They aren’t – as Mead puts it – supposed to be “perfect copies”. The opening hole, for instance, has been dubbed “Alps” and pays homage to the 3rd at the National Golf Links of America, which, in turn, was based on the 17th at Prestwick Golf Club in Scotland.

"... the idea behind the square greens came both from creating something different, as well as tying back to the work Macdonald created at Chicago Golf Club." – OCM lead designer, Ashley Mead.

Measuring 305 metres from the tips and offering sweeping views over Lake Victoria, players are encouraged to take on the dune off the tee to create an easier approach into the first of the layout’s massive, square-cut greens.

“We were eager to create a point of difference with the club instead of trying to be a similar course to what’s already down here, so the idea behind the square greens came both from creating something different, as well as tying back to the work Macdonald created at Chicago Golf Club,” Mead said when asked about the practice that dates back to the game’s Scottish origins. Following two additional template holes – “Biarritz” and “Plateau” – you will arrive at the 4th hole, which has received the fitting title of “Buckley’s Chance”. The short two-shotter is 270 metres from the back markers and is played alongside the shell-grit banks of
Lake Victoria.

The prevailing wind is into and off the left, so faders of the ball should expect to see any poorly-struck shots sailing towards the swan-filled lake. The bunkerless green, meanwhile, has been placed right against the lake’s edge – and it offers one of the better views back towards the newly-built clubhouse, which sits smartly on the highest point of the property.

Short par-4s are supposed to offer golfers multiple options off the tee. It’s all about risk versus reward in regard to what club choice you make. The 4th hole certainly captures that strategic spirit, which is one of the themes OCM wanted to embed in every hole at Lonsdale Links.

“It was certainly our intention to create a more strategic course than what was once here. Our ideal is for a course to not reveal itself on day one. The more you play it, the more you should understand it and work out where the pins are and where you want to access them from, it’s all about plotting your way around,” said Mead, who has enjoyed a working relationship at Lonsdale since 2000.

Another thought-provoking short par-4 comes at the end of the opening nine and has been modelled off the 17th at the National Golf Links of America. The uphill 275-metre 9th hole is called “Leven” – and it required the most earthwork of any hole at Lonsdale Links. You would do well to avoid the lengthy bunker that skirts the left side of the hole to allow for an easier approach into the sloping heart-shaped green.

"I like 16 and how it ended up. It’s a bit of a talking point. Alister MacKenzie once said that talk and discussion is all to the interests of the game. Anything that keeps the game alive and prevents us being bored with it is an advantage." – Ashley Mead.

The first par-5 on the back nine comes in the form of the relatively short 11th hole. Inspired by the 16th at the National Golf Links of America, “Punchbowl” is the first of four new holes – the others being 14, 15 and 16 – to be built on farmland purchased by the club in 2016 in preparation for the redesign. It maxes out at 450 metres from the tips and plays uphill from the tee, so players should aim to shape something slightly left-to-right to accommodate the sharp turn at the top of the hill.

It is from here that you will spot the punchbowl green, which has given the hole its name, for the first time. You will also be rewarded with views over Ocean Grove and the sand dunes that ultimately inspired the green site that is nestled into a hollow below. Any wayward approach is prone to finishing on the dunes guarding the front of the putting surface, or in the small bunker carved into the blow at the back of the large green.

The next real highlight, for mine, came at the par-3 14th hole, which measures 130 metres and has been named “Reverse Redan”. It is based on a short, reversed version of the classic 15th hole at Scotland’s North Berwick Golf Club. The green slopes from left-to-right and is protected by a deep bunker on the right. The best way to approach this hole is to use the slope of the green to your advantage. Go flag-hunting at your peril! If you’ve never had the opportunity to play the Old Course at St Andrews – or even if you have for that matter – you’re bound to enjoy the final template hole at Lonsdale Links. The 275-metre 16th has taken aspects of the famous “Road Hole” to become, in my opinion, one of the better short par-4s on the Bellarine Peninsula.

The green is certainly reachable for longer players, provided their tee shot is accurate and has safely carried the salt marsh. But anything left is likely to find the Moonahs or the wrong side of the post-and-rail out-of-bounds fence, which brackets the putting surface. The main attraction, however, is the deep bunker at the front of the green that emulates one of the world’s most recognisable hazards.

“I like 16 and how it ended up. It’s a bit of a talking point. Alister MacKenzie once said that talk and discussion is all to the interests of the game. Anything that keeps the game alive and prevents us being bored with it is an advantage,” Mead said.

Speaking of famous hazards … Pulled or hooked shots off the 18th tee might
have you thinking you’ve ended up in the “Church Pews” bunker between the 3rd and 4th holes at Oakmont Country Club. The bunker has practical purposes, too, preventing the ever-present wind from ridding the hazard of its contents.

“I can probably see us adding a couple more of those island bunkers like those found at 18 around the course, just to try and limit that wind blow. The wind plays a much greater factor now that the non-native pines and gums have been removed,” Mead said.

Playing golf at Lonsdale Links almost resembles an enjoyable stroll through an interactive museum built to honour various eras of course architecture. But the beautifully manicured layout also possesses plenty of its own character – and it will surely make its presence felt in the national rankings for years to come, as the club prepares to celebrate its centenary in 2022.

MEMBERSHIPS: Lonsdale Links offers a wide range of membership categories to suit all ages and lifestyles, whether you’re an experienced golfer, new to golf or a regular visitor to the clubhouse and restaurant facilities.