Maverick Antcliff isn’t yet a household name. But if the Queenslander continues his good form in Asia, it won’t be long before he is.

Hailing from Beaudesert, about an hour south of Brisbane and attending Hills International College as a teenager ... It’s a familiar Aussie golfing story isn’t it?

But while Jason Day might be the most recognisable name to have undertaken this path, there is a new player with a similar story putting his name forward as one to watch for the future. Maverick Antcliff, who claimed three wins from the first five events of the China Tour season to take a healthy lead on the money list, now has a European Tour card almost within reach.

His story is not quite as dramatic as Day’s introduction to the game, Antcliff first set foot on a golf course in Beaudesert as an 11-year-old alongside his grandmother and became “basically hooked” from the get go.

The now 26-year-old even admitted his fellow Hills alumni wasn’t a particular role model when developing his game despite their similarities.

“A little bit, but because Jason is probably six or seven years older than me, when I was getting started he was still an amateur then just turned pro,” Antcliff exclusively told Golf Australia magazine when asked whether Day was an inspiration. “I was a massive Sergio fan when I was a kid and obviously Scotty. It was probably more those two than JD.”

However, the golf nursery appears to have had a similar effect on both players, Antcliff noting the benefits of playing alongside older classmates when he attended Hills alongside fellow Tour players Jake McLeod, Anthony Quayle and Cory Crawford.

“It was just nice to be able to play a pretty good golf course, in terms of the length and to be exposed to that,” Antcliff says. “And then when you’re young in grade 10 and playing with guys that are 17, 18 years old you are always trying to keep up, so you learn to just play.” A constantly-improving short game under the tutelage of Grant Field has been key to Antcliff’s success. PHOTO: Getty Images.

What came next once he had finished his time at Hills wasn’t clear cut for Antcliff who, like McLeod, was a Queensland representative alongside Cameron Smith.

With his parents encouraging tertiary education, Antcliff attended the University of Queensland. However, he quickly decided it wasn’t for him, Antcliff explaining in a typically laid back and understated manner.

“I went for about two weeks and just thought, ‘Nah, this isn’t for me’. I just played amateur golf then for a year, made a couple of Aussie teams, then got a couple of scholarship offers to go over to the States. It was kind of a no brainer, with me wanting to play golf professionally and my parents wanting me to get an education as well,” he said of his decision to play college golf.

Presented with offers from a variety of schools, Antcliff eventually chose Augusta State, the school Patrick Reed led to back-to-back National title wins in 2010-11. Antcliff’s reasoning for choosing the school nearby Augusta National, with a history of producing top players, gave an insight into his nature and confirmed he is a dinky die Queenslander.

“In the summer of 2011 I went over and played some tournaments in America to get a feel for it and I played the Dogwood in Atlanta, two hours away from Augusta, and I really liked it,” he said.

“The southern hospitality is second to none, it was just a great experience, everyone is super nice and the weather is good. I went to Florida and I didn’t like Florida, it was just kind of a weird vibe. I got offers from other schools but it was mainly climate in the end to be honest. That’s why I made the decision.”

Despite being described by Augusta State on its website as “a standout” and having led his team’s stroke average as a freshman, Maverick doesn’t look back on his time in college as his best golf. In fact, he believes his golf hit a speed bump as he learned to manage everything that comes with being a student athlete.

“A lot of the time I was more frustrated than anything, but a lot of that was, obviously in 2011, all I did was play golf and work part time, whereas you go to college and you have to do everything for yourself and study and prepare for exams and then you travel for golf, so there was a lot on my plate. I guess I could have handled it differently, but that taught me a lot.” During his time in college, Antcliff competed against a number of now PGA Tour regulars, driving his knowledge that he has the game to compete at the highest level. But alongside the competitive side of college golf, his choice of school also allowed Antcliff to experience Augusta National on more than one occasion. The mecca of golf courses had a profound effect on a player not typically that fussed by the venues on which he now plays the game for a living.

“I played there twice and I have been on the property probably upwards of 15 times going to The Masters,” Antcliff said.

After turning pro following his senior year in 2015-16 and mixed results, Antcliff found himself near the top of the leaderboard in a number of events in 2018 on the Asian Tour with chances to win, opportunities he acknowledges helped him win in China earlier this year.

“I gave myself a couple of good opportunities to win last year on the Asian Tour and a couple of tournaments in Australia, but sometimes you have to fail before you get a win. You have to go through those experiences to then capitalise on the chances you get later,” he said.

The next step was a good showing at the Australian Open in 2018, Antcliff acknowledging a practice round with former teammate Smith, who he now shares coach Grant Field with, helped relax him for what was at the time the biggest week of his career, finishing T13.

“It was my second Aussie Open, it was cool playing with ‘Smithy’ early in the week … it helped settle me down a little bit. I like how The Lakes is tough, that kind of golf is a bit of a grind, you have to hit it nice, plays into how I play, so I felt really comfortable out there,” Antcliff said.

Playing well in the Australian Open and other events at home also allowed Antcliff to play alongside some experienced, bigger names, including Marcus Fraser, Stephen Leaney, Matt Kuchar and Cameron Percy. Antcliff claimed his third win of the 2019 China Tour season at the Beijing Open in June. PHOTO: Getty Images.

The experience proved to him that his best golf can be competitive, while also taking in the ability of players with plenty of experience at the top level to remain calm and unflustered – a lesson that undoubtedly helped at the start of 2019 after receiving opportunities in bigger events.

Antcliff admits to becoming impatient at times after four straight missed cuts. But an ever-improving short game under Field’s guidance and a conversation with Golf Australia High Performance General Manager Brad James saw him start working with a sports psychologist.

In the following weeks, he finished fourth at the Bangabandhu Cup Golf Open in Bangladesh on the Asian Tour, before claiming his maiden win at the Bo Ao Open on the China Tour.

Antcliff could have been forgiven for getting a little carried away with celebrations, but his new mental approach saw him claim a second win the very next week. Then there were two more top-10s in China and Korea, which were followed by a third China Tour victory at the Beijing Open – a win that also took him within reach of the top-200 on the world ranking.

“You don’t really know what it takes to win until you do it, so the first week that I won my game was in pretty good shape,” he said. “It was playing quite difficult, windy and I just played really well. It couldn’t have really gone much better.

“Then the next week I got off to a slow start, it kind of built and got better each day as opposed to being up there the whole time. The last one I had to kind of hang tough later in the week. I would definitely say that I wouldn’t have been able to do that before, without those winning experiences.”

“There is a lot of downtime, in hotel rooms, airports and stuff like that, so I have definitely thought about it (European Tour card).” – Maverick Antcliff

With three events remaining on the schedule at the time of writing, Antcliff has his focus firmly set on the China Tour, having initially planned to jump between there and the Asian Tour.

It is easy to understand the decision, as the top player on the order of merit when the season concludes in November will earn a European Tour card for 2020. It is a reward Antcliff acknowledges is difficult not to think of as he looks to how he will approach his remaining events.

“There is a lot of downtime, in hotel rooms, airports and stuff like that, so I have definitely thought about it,” Antcliff said. “I would be lying if I said I hadn’t. But at the same time as well as thinking about that, you can think about things going the other way as well, neither has happened yet, I haven’t won it or lost it, so I am just concentrating on doing what I can do.

“Obviously getting off to a good start and then you come back, it isn’t so much managing the expectation, but it is a little bit easier to be patient.”

Staying patient is a regular theme with Antcliff when discussing his game and plans for the future. And if the strategy keeps delivering similar results to the first half of 2019, he may not have to be that patient before he potentially achieves his goal of a place on the PGA Tour competing against fellow Beaudesert product, Day. 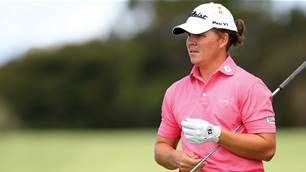