Divided. That, sadly, is the one word answer I would feel compelled to give if asked to sum up golf right now.

Rules controversies are nothing new in the game but the spitefulness with which they have been unfolding since January 1 this year is both shocking and sad to see.

After yet another incident this past weekend (Adam Schenck was – correctly – penalised two shots for having his caddie stand behind him after he took his stance in a bunker) social media was again inundated with ‘hot takes’ and arguments.

Justin Thomas weighed in with a very pointed tweet aimed directly at the USGA and they, surprisingly, hit back with an unusually aggressive response.

This all comes on the heels of the USGA Executive Director Mike Davis claiming the new rules had been a ‘huge success’ (optimistic at best) while at almost exactly the same moment his R&A counterpart Martin Slumbers was suggesting things ‘hadn’t gone as smoothly’ as he would have liked.

The only certainty right now seems to be that the game is in a bit of a mess.

The solutions are much harder to identify than the problems, of course, but ALL stakeholders in the game need to look at their behaviour and ask themselves whether their actions are hindering or helping the game moving forward.

Did Rickie Fowler’s public ‘drop from the bum’ joke do anything to advance the discussion? Did Justin Thomas calling out the USGA directly move the conversation towards a solution? Did the USGA PR department’s response achieve that outcome? And is Mike Davis’ false optimism really doing the game any good? None of it is clear cut and things move so fast in the digital information age it can be difficult to know what’s best.

Certainly, the calls for the professional game to make its own rules (put forward regularly, even before this year, by Tom Pernice among others) are ill advised at best.

There is a reason the Tour has never gone down that path and it is a very simple one: not only is there no money to be made, there is actually a cost involved.

And that doesn’t even touch on the bigger picture problem of increasing the disconnect between the professional and amateur games and the threat that poses to the pay for play ranks.

(Hint: only golfers watch golf. If you start to exclude us there is a very real danger we will stop watching at all.)

Also disturbing are those who constantly accuse the USGA and R&A rulesmakers of being ‘amateurs’.

Given there is no ‘profession’ of golf rule making those tasked with the job are, by definition, ‘amateurs’. But they are also experts and deserve respect whether you agree with them or not.

The rules of the game always have and always will be difficult to both make and enforce and for that reason will always be somewhat imperfect.

But public bickering about them among the game’s most high profile figures certainly isn’t going to make life – or golf – any better. 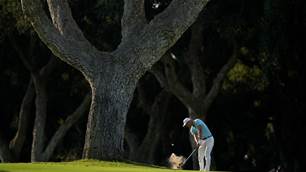