In America, they call a column like this “takeaways.” Where I come from that means a fish supper. But no matter.

What follows are some thoughts on a week spent at the grandly-titled “The Country Club” (pretentious? moi?) and a U.S Open that was the usual mix of good, bad and point-missing.

It must be acknowledged that the composite course used for this 122nd playing of America’s national championship is terrific. The highlight was the delightful little par-3 11th. At its longest, it was only 135-yards or so, but it still managed to extract a fair amount of punishment on the seemingly unsuspecting players. Elsewhere, there are so many other great and fascinating holes that offer – or should – alternatives on just how to make the journey from tee-to-green. Unfortunately, those options were too-often limited (and sometimes completely eliminated) by the presence of, you guessed it, too much long grass. Okay, so penal rough is part of the DNA at every traditional U.S. Open. But that doesn’t make it right. Standing behind just about every tee this week I shook my head in despair as I gazed down fairways that were a) too narrow and b) surrounded by the aforementioned long grass. All but eliminating the possibility of the risky and therefore exciting recovery shot does not make for interesting or entertaining play. Not for the competitors or the spectators. Oh well.

He’s made his own well-compensated bed. That much is obvious. But it would take a heart of stone not to feel at least a little sympathy for golf’s greatest-ever left-hander. A re-run of his appearance in the same environment at the inaugural LIV event near London a week earlier, the press conference Mickelson gave here on Monday was a mixture of evasion, obfuscation and, ultimately, more than a hint of stubbornness.

Speaking oh-so slowly and carefully – in complete contrast to the runaway verbal outpourings that got him into so much trouble a few months ago – Mickelson was a fascinating psychological study here. The reaction of the crowds who watched him play a lacklustre 36-holes before departing was especially interesting. No, there weren’t too many cheers. But there wasn’t too much heckling either. The overriding and lasting impression was that most in the gallery didn’t seem to care too much one way or the other. Which may, of course, be the cruellest fate of all. This U.S Open was one to forget for Phil Mickelson. PHOTO: Getty Images.

While there are certainly plenty of cracks in the persona of an individual who has never before appeared to lack confidence, he dint; seem to be the classic “broken man.” But he certainly appears to be in need of help. Let’s hope, for his sake and that of his family, he is getting it.

Sad to say though, as far as the PGA Tour is concerned, Lefty has left the building.

At least for this observer, a U.S Open is something to be approached with caution. Because of the USGA. The governing body in the United States and Mexico has been known to screw things-up now and then.

I give you Shinnecock Hills (at least twice), where it has been known for U.S Open competitors to putt off greens and, sometimes, into bunkers.

I give you the slope/speed that rendered the 18th green at the Olympic Club in San Francisco all but unplayable.

I give you the completely inappropriate rough that all but smothered Pinehurst No.2 – the ultimate strategic course – in 2005.

I give you the tees at Bethpage Black that were so far back players were unable to reach the fairways. 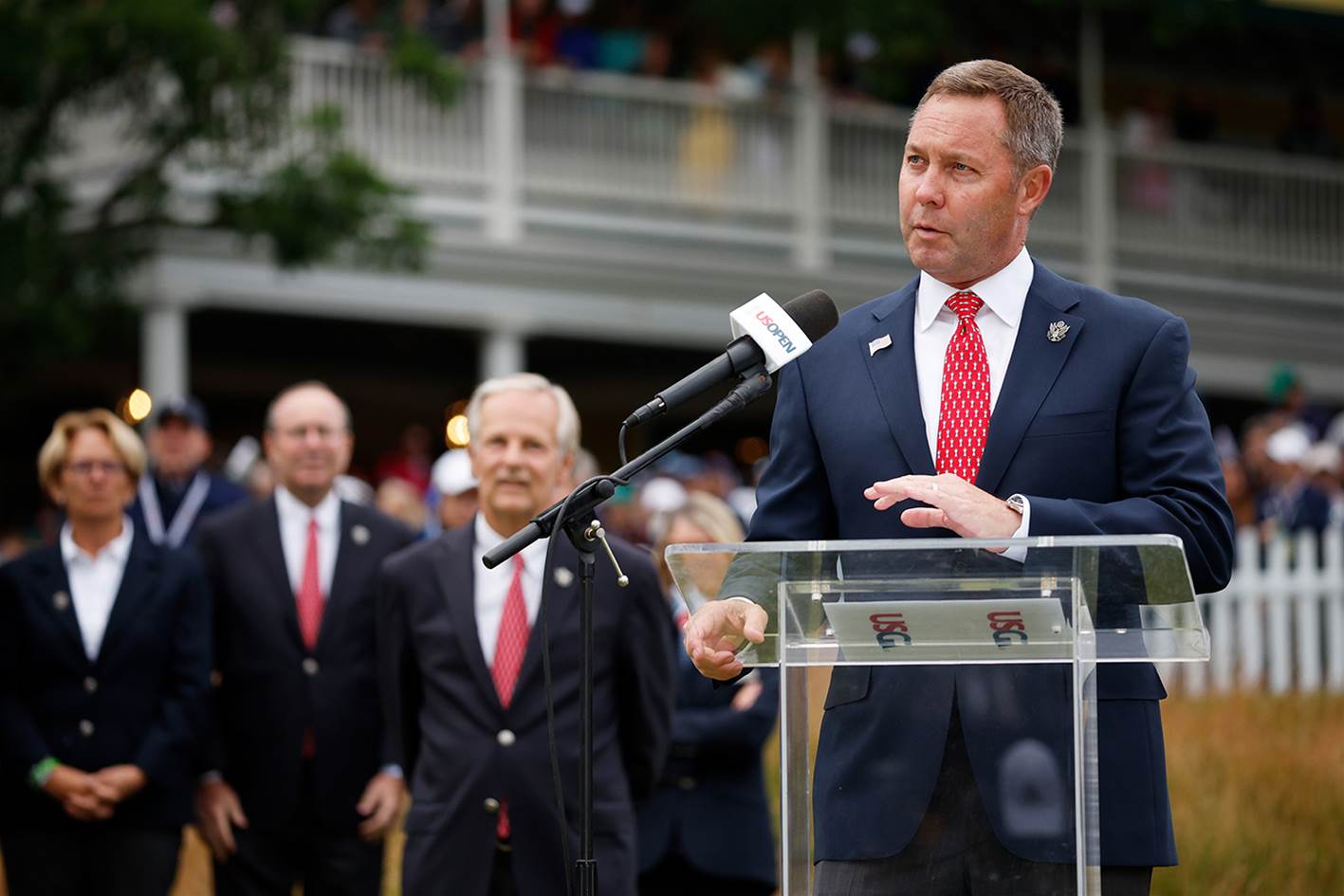 In other words, these blue-blazered and blue-blooded types (you know, those guys with an initial before their Christian names and a Roman numeral after their surnames) are capable of just about anything when it comes to course set-up.

This time though, they stood back from the edge of sanity, apart from around the greens. Which was a pity. The sight of world-class golfers hacking and slashing away at invisible balls while standing only a few feet from the edge of a putting surface is truly an unedifying spectacle.

Still, all in all, it must be acknowledged that the USGA produced what was, generally speaking, an eminently watchable event. And, amidst a storm of well-justified complaints regarding the volume of ad breaks during the telecast, they did come through with a final hour devoid of commercial interruption. So, the blazers did manage to not get in the way when it really mattered. In my book, that’s a result.

It was tied fifth this time for the Northern Irishman. And another disappointment. While McIlroy can justifiably claim to be the man to beat in major championships, the harsh fact is that, for eight years now, he has been finding men capable of doing just that.

It wasn’t that the four-time major champion played badly. His final round added up to 69, his third sub-par round of the week. But there was sloppiness within that benign statistic. Three of his four bogeys came at three of the six-easiest holes on the course. “I played well enough to give myself a chance to win,” he insisted. “I didn't get the job done, but I'm closer than I have been in a while, which is good. But yes, I’ll look back at this as another missed opportunity. Missed opportunities are better than not contending at all though. So that is a positive. I have to stay patient at this point because if I just keep putting myself in position, sooner or later it's going to be my day and I'm going to get one.”

Many are those who will be pleased for the veteran bagman.

Despite working for the likes of Seve Ballesteros, Lee Westwood and Darren Clarke over the years, this represented – as it does for his boss – a first major championship victory for the amiable Yorkshireman. Taking the flag from the pin on the 18th green, he was clearly emotional, a fact that was not lost on Fitzpatrick.

“It means the world to Billy,” he said. “I can't tell you how much it means to him. It's unbelievable. I know it's something he's wanted for a long, long, long time. To do it today is incredible.” Maybe now Foster will be able to forget the torment of the 2003 Open Championship at Royal St. George’s. On Thomas Bjorn’s bag, he watched in horror as the Dane took three shots to escape a greenside bunker on the short 16th, then dropped another shot to lose by one to Ben Curtis.

“That was the toughest loss I’ve ever been part of,” confirms Foster. “The double-bogey at the 16th hole in the last round was bad enough, but what people forget is the two-shot penalty he suffered at the 17th hole on the opening day. After leaving his ball in a bunker, he hit the sand in anger. I had to tell him when he came out of the sand. He made an eight there, yet still had a three-shot lead on the 15th green on Sunday. It was heartbreaking to lose that day. I cried in the car on the way home.”

Not this time though. Knowing him, the celebrations are likely to last a while.

Under-fire Phil four-putts his way out of slam bid