For the golfing holidaymaker, the picturesque stretch of Queensland coastline incorporating Bribie Island in the south to Noosa Heads in the north has it all.

More than 100km of pristine beaches combine with the tranquil beauty of the Glasshouse Mountains, Blackall Range and Noosa Hinterland to provide one of the great natural wonders of this country.

However, the Sunshine Coast is more than just the perfect mix of coast and country. It is the idyllic location to relax and unwind – spoil yourself at a day spa, feast on five-star cuisine, feel the sand between your toes on a beach walk or, of course, play golf under deep blue, sun-drenched skies.

Golfers are spoilt for choice on the Sunshine Coast with world-class resort and public access courses as well as some impressive member clubs that welcome visitors most days of the week.

When you are planning your next golfing holiday, consider the Sunshine Coast and the selection of courses featured here.

Pacific Harbour Golf & Country Club opened in April 2006 and the reviews that followed could not speak more highly of the Ross Watson-designed par-72, located towards the northern end of Bribie Island.

The stunning course and magnificent $11 million clubhouse have continued to impress over the past 15 years, with the layout ranked at No.28 among Australia’s Top-100 Public Access Courses in 2021.

While the views of the Glasshouse Mountains from the clubhouse deck are certainly memorable, it is the quality of the star attraction – the golf course – that you will long recall. Watson’s creation is superb in that it presents a stern challenge for better players without being too hard for the casual or holidaying golfer who can tackle the course from any of the forward tees.

Watson has a flair for creating superb par-3s and he doesn’t disappoint at Pacific Harbour, with all four covering a range of distances that demand tee shots with different clubs in the bag.

The 4th measures 184 metres from the tips but a wide entrance to the putting surface is accepting of tee shots that land short and run on, while there is no such luxury on the 142-metre 7th.

This is Watson’s homage to the world-famous island green 17th hole at TPC Sawgrass – the home of the Players Championship – in the US, although Watson’s version is only a semi-island putting surface. Like Sawgrass, the green is perched above the water with a timber wall rising from the juice. 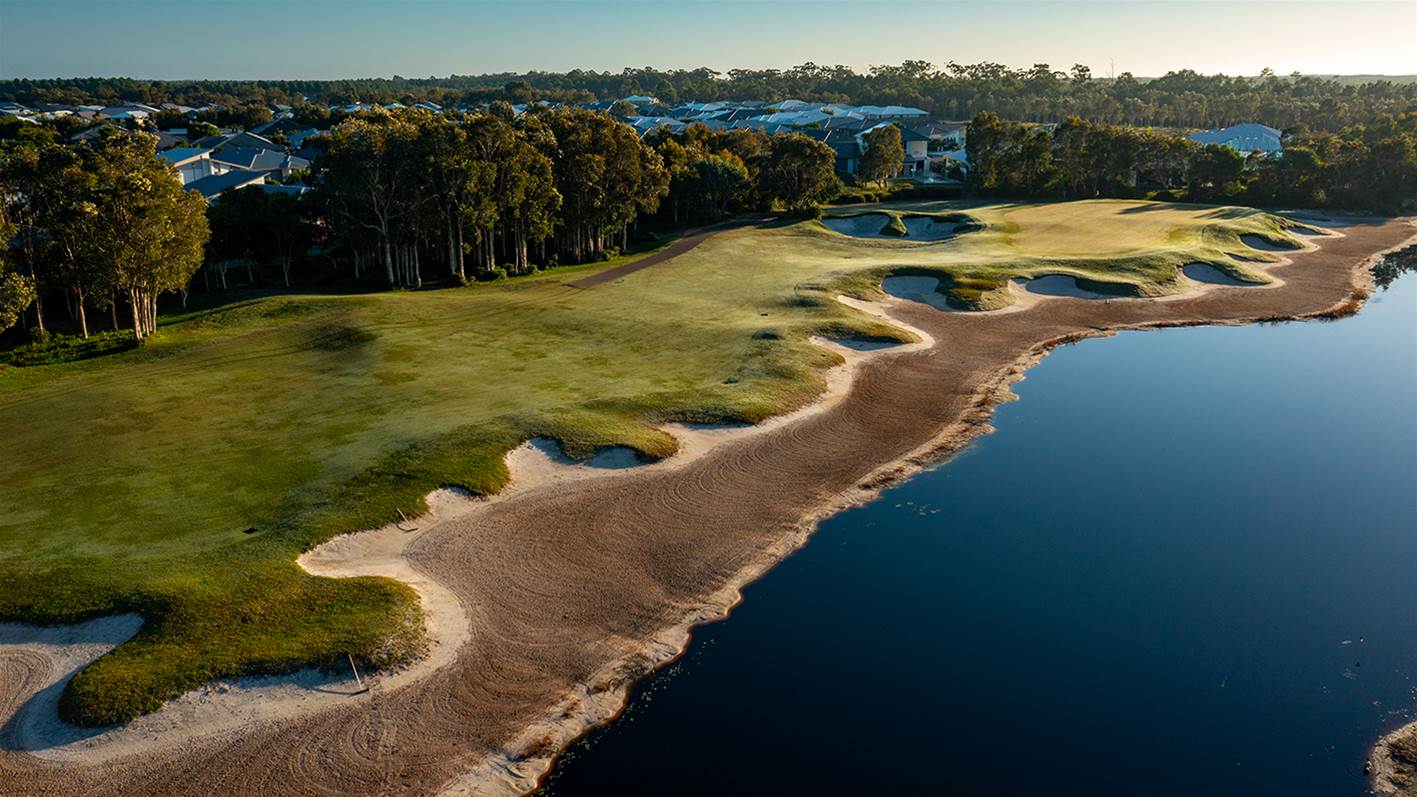 The 136-metre 13th, known as Kakadu, skirts the edge of some wetlands and plays into a prevailing breeze, so club selection is vital. This is also the case when playing the penultimate hole – a 205-metre brute that features the longest bunker in the Southern Hemisphere (just on 200 metres long). This bunker forms a beach barrier between the fairway/green and a lake that flanks the entire right edge of the hole. Hence, the hole is known as The Beach.

Bribie Island is one of the sand islands of Moreton Bay and its natural sand base provides the perfect foundation for growing quality playing surfaces on rolling terrain that also boasts terrific drainage.

Even though Bribie Island Golf Club is a stone’s throw from the sea, it is 18 holes in a bushland setting that is closer to offering a Melbourne Sandbelt experience than any other Queensland layout, having been laid out on the island’s rolling sand dunes.

The bunkering is one of the highlights of the 6,162-metre par-72 layout, which features fairways thickly lined in parts by a wide variety of native trees. The rough is fairly sparse and sandy lies are guaranteed.

Another highlight is the large, Bermuda 328 putting surfaces that are seemingly always well-presented, while the slope of the greens offers plenty of putting challenges. The opening hole – a 349-metre, par-4 dogleg right – offers a real taste of Sandbelt golf with large bunkers hugging the left side of the fairway narrowing the driving zone. Stay clear of the sand and the approach to a two-tiered green is fairly straightforward.

Bribie Island boasts a very good collection of par-3s with the 16th being the most memorable of them. From the tips, the hole calls for a shot of 172 metres to the middle of the putting surface. Your tee shot must carry the edge of a lake and avoid bunkers left and right of the angled green. Big misses here can be repelled away from the putting surface into the trees that surround the green.

Bribie Island is a good test but it’s also a lot of fun to play, which is certainly reflected in its No.79 rank in Golf Australia magazine’s list of the nation’s Top-100 Public Access Courses published in January this year.

It is a beautiful drive west into the Sunshine Coast Hinterland, where you will find the small country town of Beerwah.

Beerwah is perhaps best known as the home of Steve Irwin’s Australia Zoo. But is here where you will also find the Beerwah Golf Club – set against the incredible backdrop of the Glasshouse Mountains, which are ancient volcanic crags that soar out of the surrounding plains and are clearly visible during your round.

The course celebrated its 50th anniversary in 2019 and has thrived for decades based on the hard work of volunteers and a dedicated founding membership that boasted just 38 members and 18 associates when the first soil was turned to build the layout. The founding President was local chicken farmer Tony Baker-Finch, while his wife, Joan, was on the associates committee.

The surname should sound familiar. Their son, Ian, first fell in love with the game at the age of 11, negotiating his way around the Beerwah course and would, of course, go on to have a wonderful professional career including winning the 1991 Open Championship at Royal Birkdale. Both Tony and Ian, father and son, are today life members of the club. The course’s conditioning and design has improved markedly to what was in Baker-Finch’s formative years at the club. The playing surfaces are very good, while the design is simple but enjoyable. It is a layout of contrasting nines, with most of the outward nine running north-south, and the inward nine favouring an east-west direction. When the wind blows here it can make for an interesting challenge to club selection during a round.

For mine, Beerwah’s best two holes come midway through the back nine starting at the 348-metre 14th hole – a sharp dogleg right par-4 that will tempt bigger hitters to cut the corner over the tall gum trees. Miss the fairway though and your second shot will be from a sandy wasteland at the base of the trees. The best approach into the narrow green is from the left of the fairway to best avoid the huge bunker left and another short of the putting surface.

Like the 14th, there are several ways to play the 504-metre par-5 15th hole successfully – no matter whether you’re a long, straight or short hitter. The perfect tee shot here should be aimed at the lone tree on the left edge of the fairway with a slight left-to-right ball flight. This will leave you in the ideal position to play down the right edge of the fairway, opening up a good sight line to the green. Beware though, as there is a pond hidden behind the tree short and right of the green, so the best miss here is left into the bunker or just short of the putting surface.

If you venture to the Sunshine Coast and are looking to explore the Hinterland, Beerwah Golf Club is a wonderful place to start.