One of the New South Wales Central Coast's most popular courses is a subtly challenging layout with million-dollar ocean views that complete the picture. 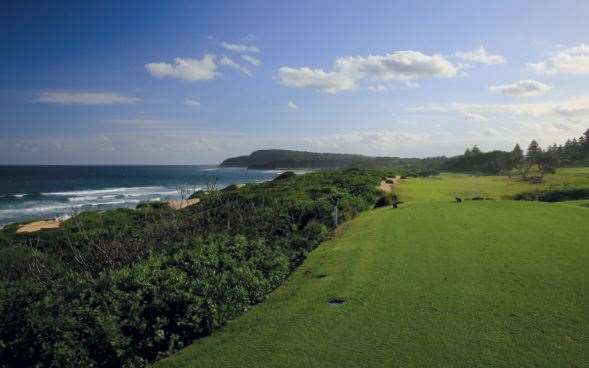 The back tee of the part-4 6th hole offers a spectacular ocean view and a tough tee shot.

Some things changed in 2010 when Tuggerah Lakes Golf Club changed its name to Shelly Beach Golf Club to more accurately reflect its location, but many aspects most certainly did not.

The immensely popular and ultra-scenic course in the heart of the Central Coast region of New South Wales had attracted golfers to its challenging yet enjoyable course since this layout opened in 1957, and a name change wasn’t ever going to quell the traffic flow. Nor would it diminish the views across the Pacific Ocean, which don’t come much better than from this slice of the coastline.

Instead, residents and visitors have continued to flock to Shelly Beach, even with the emergence in the past decade of newer, flashier resort layouts in the area. According to director of golf Jason Hart, golfers like the egalitarian nature of the course. “It’s got something for everyone,” Hart says. “It’s got a combination of user-friendly holes and tougher ones. The wind is always a challenge and it can be difficult around the greens, but higher handicappers can spray it onto another fairway and still be OK while the greens will challenge low markers.”

The 315-metre 16th might just be the toughest short par-4 on the Central Coast.

About the only modification that did take place during the period when the club’s name changed was a redesign of the 9th hole. The formerly short par-3 now measures a healthier 160 metres and helped push the par-71 layout through the 6,000-metre barrier from the back tees. Hart says it’s close to becoming the best hole at Shelly Beach, which is a fair assessment. The hole is more of a spectacle as it sits in view of the clubhouse rather than tucked behind it and it’s a difficult test at the same time as being perfectly playable.

However, the new 9th is a departure from the green designs of the other holes at Shelly Beach, stretching 40 metres from front to rear in a manner reminiscent of some of the huge putting surfaces found on the great British seaside links. A deep bunker in front must be carried and the swale to the left represents by far the better place to miss than the trouble-lined hillside to the right. All in all, though, it was a positive change for a club that once upon a time endured its fair share of them. 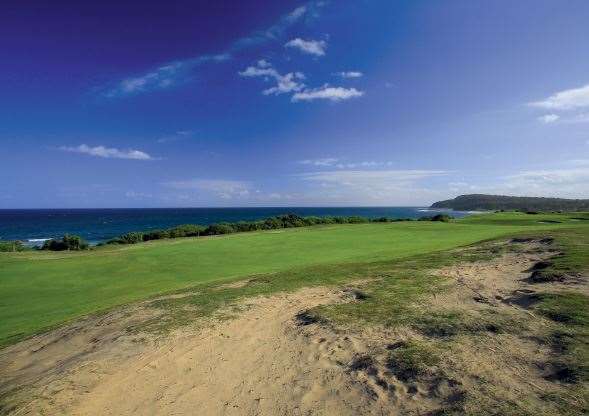 Naturally occuring sandy wasteland is a hazard to be found in the rough to the right of the par-4 5th fairway.

Originally formed in 1929, Shelly Beach Golf Club began life as a nine-hole course at nearby Killarney Vale. It remained there until 1954 when growing membership levels and the expansion in population of The Entrance and Long Jetty region led the club’s directors to find land for an 18-hole layout. The present site had caught the club’s eyes for some time but as crown land, it was more untouchable than Rory McIlroy in peak form. Or so the club thought. When it was realised that the land could, in fact, be transferred from the NSW Government Lands Department to Wyong Shire Council under trusteeship, the council had the power to lease the land to the golf club.

Fortunately for the club, Wyong Council was onside with the notion and despite some difficult negotiations the land fell to Shelly Beach Golf Club in 1952. Veteran course architect Al Howard penned the layout and five years later the present course was officially opened.

With such a superb coastal site it might not have been hard to make the most of the stunning ocean vista along the course’s eastern edge, yet Howard exposed the coast – whether through affording views or by running holes near the beach – at every chance. You’re so close to the ocean that you can see, hear, smell and most definitely taste it, especially on the most scenic holes at the 5th and 6th, where if you keep your head down while swinging you’ll miss some of the best panoramas around. 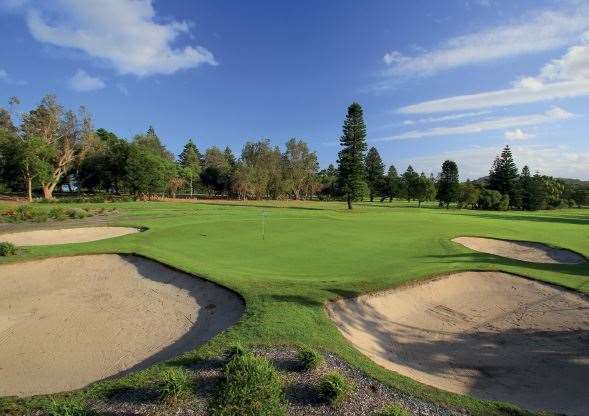 The long par-4 12th hole is rated the most difficult hole on the back nine, due to the out-of-bounds left and bunkers surrounding the green of the 400-metre plus hole

Granted, the course does have some up-’n-back holes where ribbons of fairway traverse the same stretch of slanting land but in most instances the green complexes and/or the bunkering creates diversity. Most of the bunkers are deceptively deep and constructed in a range of shapes. Complicating escapes from the sand are a mostly small set of greens with several clever undulations. Surfaces like the 17th – with a small hump to repel balls landing at the front of the green and a narrow, tapered section at the rear – make the diminutive greens play even smaller.

Further example comes at the par-5 15th, which is the last of six holes to flow side-by-side on the southern portion of the course. It’s very short for a par-5 at 401 metres but it plays uphill, which adds considerable distance. Yet it’s the green that really shines. It is small, mounded, well-bunkered but open in front if you want to chase a ball up the steep slope. Anything that fails to scamper up the hill, however, risks being sent back down the fairway, once again making a little green behave far smaller.

On these six holes – the 7th, 8th, 11th, 12th, 14th and 15th, all par-4s bar the last – stands of huge Norfolk pines are the only separation between holes and this towering timber creates a house-of-mirrors effect if you’re trying to cross back from an adjoining fairway. Many a ball has been deflected by the palm-like hands of a pine tree and thwarted an otherwise fine recovery shot. Elsewhere, the holes nearer the beach feature plenty of gnarled old moonah trees weathered by the wind.

The northern pocket of the course includes the secluded par-3 4th and excellent beachside par-4 5th and 6th. These are the best holes on the property. The 4th is a 133-metre uphill par-3 protected by seaside scrub to the left and standing on the low tee it feels as sheltered as any point on the course. The wind can play havoc above, though and in breezy weather makes the small green difficult to locate in one swing. The 5th brings play to the beach, which will devour any shot lost to the left of this 361-metre par-4. The tee shot is partially blind across a rise and while there are adjoining fairways to the right, two pot-style bunkers will have to be carried on the approach shot if the drive veers too far right.

The 6th is a nerve-jangling 333-metre par-4 played from an elevated tee beside the beach to a fairway set below. It’s guarded on the right by a pond and on the left by a fairway bunker and the beachside dunes, which like the 5th are out-of-bounds. In a nor’easter the hole can potentially be driven, but it’s dangerous even with the wind. Into a southerly it’s downright diabolical. The fairway is narrow with little bailout other than to hit a very short tee shot that will leave a far longer second than desired. It’s one of those holes where you simply cannot get away with anything less than the required shots, which explains why many a scorecard bomb has dropped on the 6th at Shelly Beach.

There’s a pair of cute par-3s at the 10th and 13th in a small parcel of the course wedged between the car park and entrance road, the last of which is particularly awkward to play well, thanks to its dramatically sloping green, an examination made tougher in the course’s most difficult wind, a westerly, which blows downwind on only two holes and at neither is that helpful.

A resonating crescendo builds from the 16th hole, a 315-metre par-4 that feels longer due to the climb from the fairway to the tiered green, which is benched into a hillside and angled against a deep bunker guarding the front and right edge of the putting surface. It’s a hole that serves up multiple options, but the safest is to take less club than driver from the tee and favour the left side, away from a lurking pond and two bunkers, and a line affording the best view of and angle to the green. Making things more challenging at 16 is the fairway’s proximity to the sea and the inevitable accompanying strong winds.

The 17th, with its aforementioned tricky green complex, is another hole to play tougher than the 309 metres listed on the scorecard thanks to the green and bunches of trees on either side of the driving zone. Conversely, the closing hole is not subtle or tricky; it is just long and tough. Uphill and measuring 534 metres, Shelly Beach’s 18th presents no easy par-5 birdie chance and instead asks for three excellent shots and some luck on the sloping green positioned under the watchful gaze of the clubhouse. 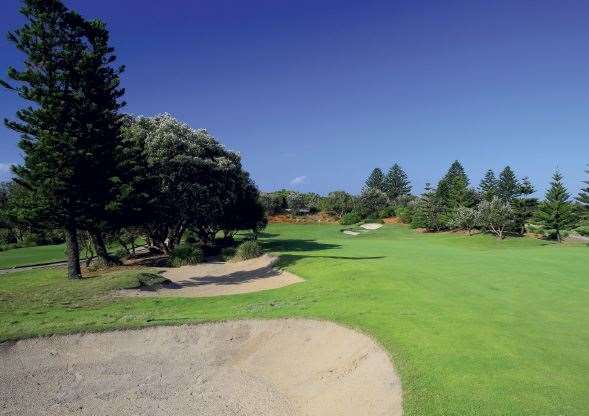 The 1st hole, redesigned a few years ago, is a terrific 500-metre par-5 where accuracy and length are rewarded.

There are 14 separate membership categories on offer at Shelly Beach Golf Club. Full playing membership for men is $895 per year, plus $55 for affiliation and insurance and a $100 house account. Full playing for females is $745 plus the same affiliation/insurance and house levy. The joining fee for either category is $400. Other options include junior, senior, veteran, country, social, cadet, non-playing and two levels of intermediate membership for 18- to 23-year-olds and 24- to 29-year-olds.

Shelly Beach has arrangements in place with the five-star Star of the Sea at Terrigal and the newly opened 3.5-star Ibis Styles at The Entrance. Mention the golf club at the time of booking to receive discounts and special offers. Shelly Beach Cabins also sits at the southern tip of the golf course, only metres from the 7th green.

A corporate golf day at Shelly Beach provides an ideal opportunity to network with clients, provide incentives for employees or, alternatively, as a great fundraising avenue. The club offers packages that cater from 20 to 150 people with a professional team available to help co-ordinate every aspect.

On the course, additional facilities include a chipping green and practice nets. Off it, the clubhouse features a lounge and restaurant/café, two bars, a beer garden, function room, snooker tables, TAB and gaming, Foxtel and a courtesy bus that covers a five-kilometre radius.