With postcard quality scenery, a feast of great food and wine offerings and terrific golf courses, the New South Wales South Coast might just be one of Australia’s great golf road trip destinations.

Wedged between the Great Dividing Range and the Tasman Sea, the 250km strip of New South Wales southern coastline between Mollymook and Eden is magnificent in its diversity.

The Princes Highway (Route A1) winds its way through the region, while skirting the edge of beautiful national parks and offering glimpses through the tall timbers of untouched beaches, rivers, mountains and rolling pastures.

Beyond the obvious natural and cultural attractions, there are the quality golf courses. It seems even the smallest towns along the highway have a course – ranging from ‘must play’ nationally ranked beauties, to nine-holers you’ve probably never heard of but would undoubtedly enjoy.

But perhaps the best things about playing golf on the NSW South Coast is its value for money, accessibility and mild climate, which makes it the ideal year-round golf destination for travelling golfers from Sydney, Canberra or Melbourne.

I started my journey south at Mollymook Golf Club’s Hilltop course, which will host the Australian PGA Seniors Championship in November.

With the event just a few months away, the course has been a hive of activity of late with a lot of the layout’s greenside bunkers being upgraded with new drainage and sand. Peter Senior has already entered to play and Terry Price, who won the NSW/ACT Senior PGA Championship at Mollymook back in February, is also a likely starter. Peter O’Malley, Mike Harwood and Peter Fowler are also expected to tee it up.

The downhill 10th is one of Mollymook's finest holes. PHOTO: Brendan James.

And when they do, they will find a layout that is not only appealing to the eye but is quite the challenge.

The layout is the one and only design of the late Bill Andriske, who was the course superintendent at the club’s nine-hole Beachside course and also helped develop the local football oval, which now carries his name. The Hilltop course took more than 18 months to carve out of dense eucalypt forest and was opened for play in 1977.

Four tough par-4s, all measuring between 365 and 398 metres, open the round. This quartet demands players use their driver and use it well from the outset, which can be the undoing of some golfers as they try and extract their ball from the densely wooded areas.

Apart from the downhill opening hole and the long, uphill par-5 8th hole, the front nine is relatively flat. The inward half covers more dramatic terrain, which offers a greater variety of shots and gives rise to Mollymook’s best holes.

As you walk down the 10th fairway you will be impressed with the quality of the grass beneath your feet. If your ball is on the fairway you will have a good lie and a short iron approach to the green well below. Two bunkers right and another to the left of the smallish target are easily found with even the slightest of mis-hits, while lake beyond doesn’t really come into play. 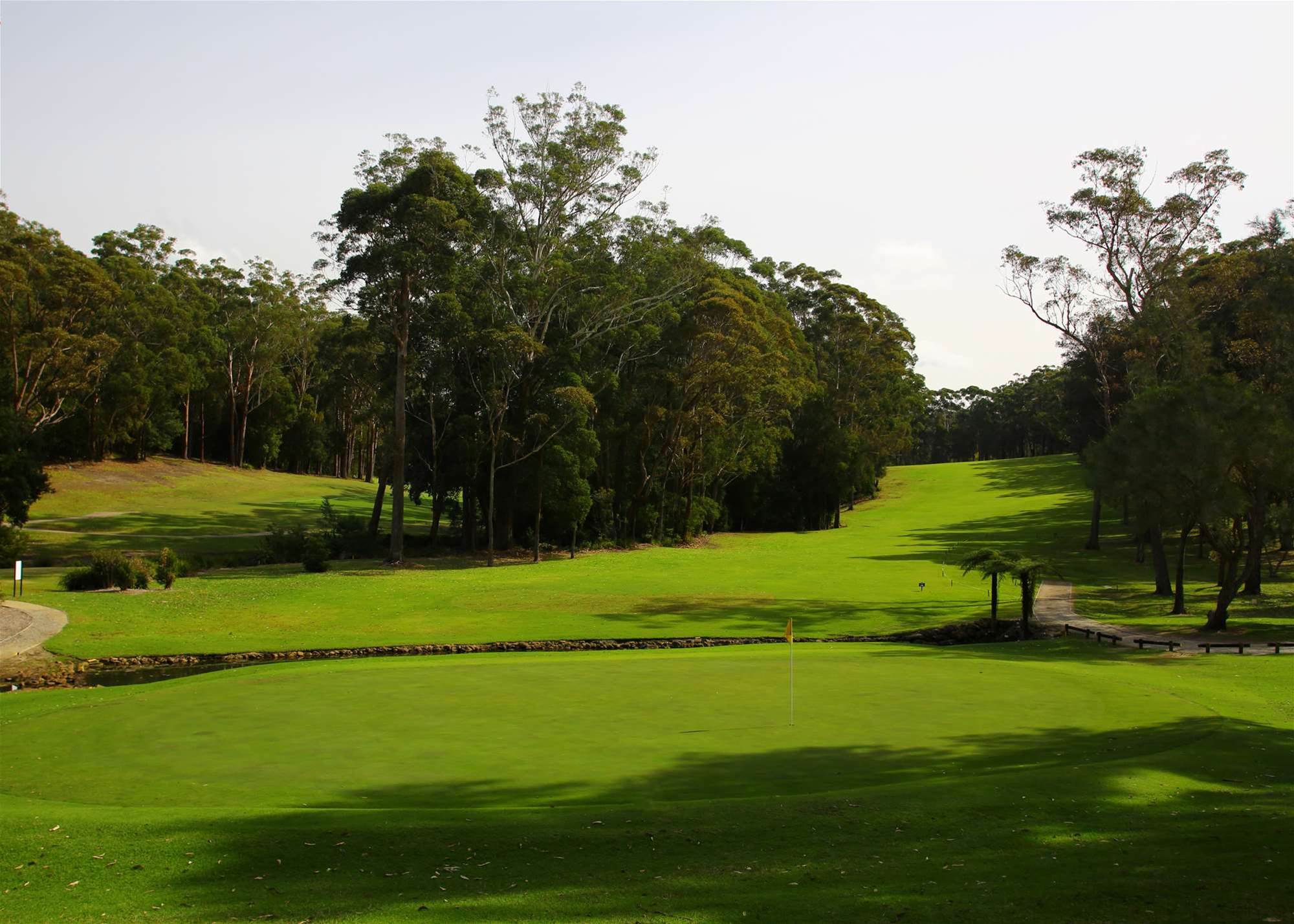 One of Mollymook’s most memorable holes, for mine, is the 500-metre par-5 13th, simply because it calls for a long drive over the crest of a hill to a fairway that sweeps down and to the right, like a ski jump towards the green. At the bottom of the hill a creek cuts across the front of the wide, but shallow, green. There are no bunkers to be concerned with, but the key here is to leave your approach below the hole because the putting surface slopes markedly from back-to-front and left-to-right as you look at the green.

While the 13th might be memorable for its challenge and strategy, the par-3 17th could certainly claim to be Mollymook’s prettiest hole. The 162-metre downhill par-3 features teeing areas surrounded by beautifully landscaped gardens of azaleas. From the tee, your ball must carry a creek well short of the green, but it must also avoid the three recently remodelled bunkers that surround the kidney-shaped putting surface.

In fact, Moruya’s fairways are of the quality you might expect from a private city club with a much bigger budget and greens staff.

Batemans Bay, an easy 45-minute drive south of Mollymook, is one of the South Coast’s major tourist hubs. Lying at the mouth of the Clyde River, there are plenty of beautiful beaches to explore, and the area’s mild, temperate climate makes it an ideal destination for a relaxing break – especially for those escaping Canberra’s climatic extremes, just two hours’ drive to the west.

The 27-hole Catalina Country Club celebrates its 60th anniversary this year, having opened as five-hole sand scrape course in 1956.

Water hazards can be found around the course, but it really comes into play on Catalina’s signature hole – the 137-metre par-3 14th. This is a lovely hole, where several species of birds and ducks, call home. A large pond licks at the right edge of the fairway before wrapping around the right and back of the putting surface. A small bunker and a slope down to the water is all that separates the green from the water hazard, so there is absolutely no room for error missing the green right or short.

Leaving the beauty of the bay behind, the Princes Highway twists its way south and inland, through the massively tall timbers of Mogo State Forest. If you can spare the time before your next round of golf, a stop at the small village of Mogo and its zoo is an absolute must, especially if you’re travelling with a young family.

Historic Moruya, is only 25 minutes’ drive south of Batemans Bay, and lies on the banks of the Moruya River.

The Moruya Golf Club is one of the town’s main attractions and has come a long way since the late 1980s when it was increased by six holes at an 18-hole layout as part of an Australian Bicentennial project.

The challenge at Moruya begins from the opening tee shot. The 481-metre 1st hole is a straight par-5 but out-of-bounds and a water hazard line the left side of the fairway, while the right edge is heavily tree-lined all the way to the green. A hazard cutting through the fairway will catch mis-hits and poorly judged lay-up shots. Heading for the green, a massive bunker short left, and a smaller sandy hazard to the right, demand an approach shot of pinpoint accuracy to set up a birdie or par. 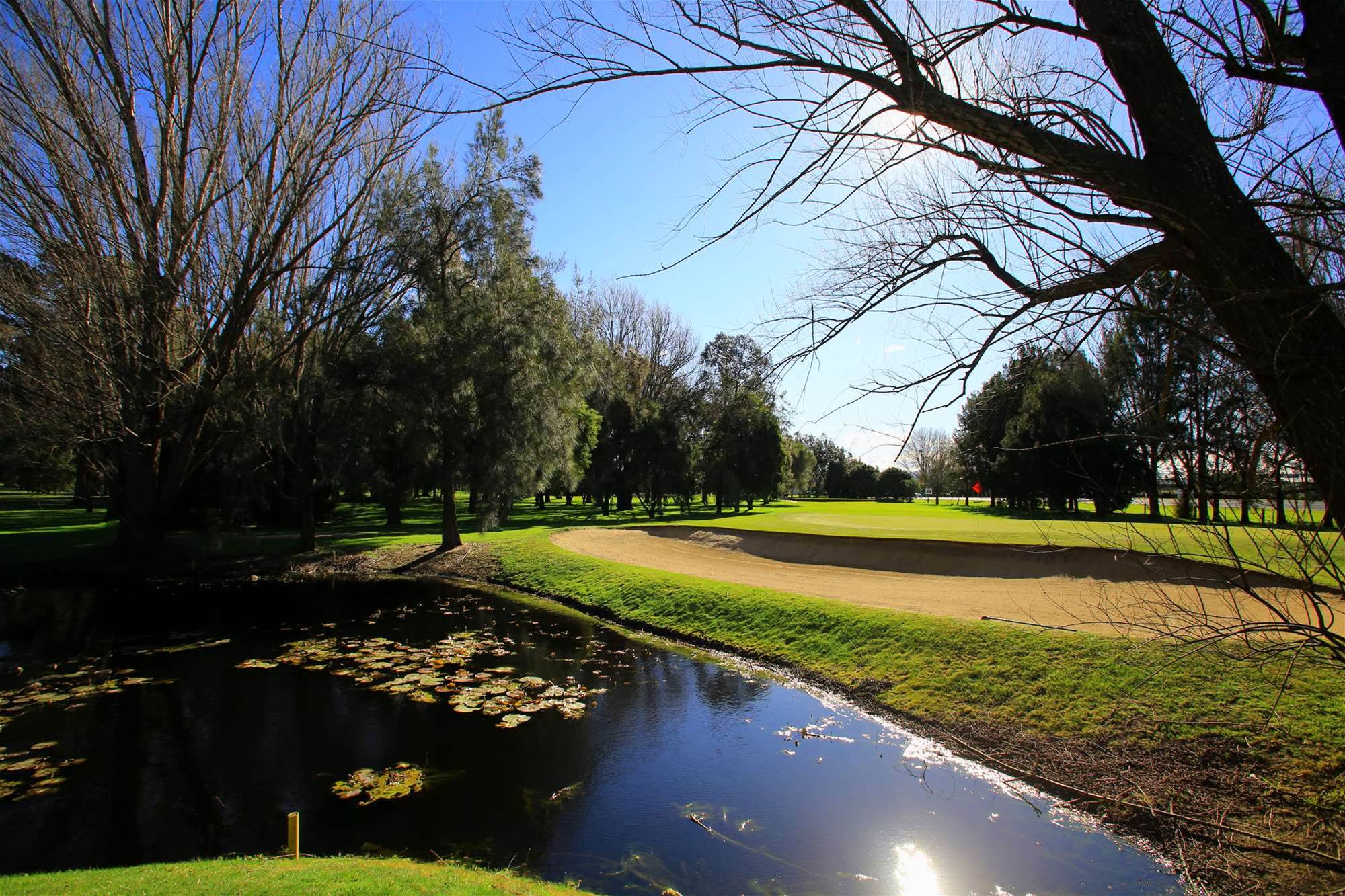 The straight opener doesn’t give a true indication of what is to come as Moruya features plenty of dogleg holes where a premium is placed on getting your tee shot into the correct position for a straightforward approach.

Much of the course is an easy walk but there are several back nine holes that cover higher ground, with the 319-metre par-4 15th being the best of them. The sharp dogleg left climbs gradually over the crest of a hill before dropping to the putting surface, which is protected by three bunkers around its edge. The key here is not to hit too far and straight off the tee as a water hazard through the fairway can be reached by longer hitters.

Moruya has a unique close to both nines. The 364-metre par-4 9th shares a huge green with the 351-metre par 18th. The enormous putting surface, easily the largest on the South Coast, is a fitting end to two tough holes. The 18th is the harder of the two holes where a solidly hit approach must avoid the biggest lake on the course, right and short of the green.

Make no mistake, Moruya is a fun course to play. It’s not too long, at 5,734 metres from the back pegs, and the playing surfaces are always beautifully maintained. In fact, Moruya’s fairways are of the quality you might expect from a private city club with a much bigger budget and greens staff.