The rest of the golfing world is starting to discover what we have known for a long time – Victoria’s Bellarine Peninsula is among the best golf holiday destinations this country has to offer.

The rise of the Vic Open has had a ripple effect on the golfing landscape across Victoria’s picturesque Bellarine Peninsula.

Since moving to the beautiful Thirteenth Beach Links six years ago, the event has grown significantly – perhaps beyond the wildest dreams of its organisers.

This year, an unprecedented collaboration between the European Tour, the LPGA Tour, the PGA of Australia and Australian Ladies Professional Golf to co-sanction both the men’s and women’s events saw it feature in headlines and dozens of hours of TV coverage here and abroad.

And the marketing, that money can’t buy, was ramped up for a week as players and fans took to Instagram, Facebook and Twitter to extol the virtues of life on the Bellarine and the golf to be found there.

But, really, they only scratched the surface with their observations of Bellarine golf, which offers a quality mix of classically designed links layouts, modern courses and a few hidden gems.

Thirteenth Beach – with its two contrasting 18-hole layouts, the Beach and Creek courses – is a must-play for any golfer visiting the region. When the Beach Course opened for play in 2001, it raised the bar in terms of golfing standards on the Bellarine Peninsula. Thirteenth Beach was the vision of entrepreneur Duncan Andrews, who fell in love with the coastal strip of sand dunes at first glance. Having already developed The Dunes Links – across the other side of Port Phillip Bay on the Mornington Peninsula – Andrews commissioned the design genius behind that layout, Tony Cashmore, to craft a course that would incorporate as much of the rugged dune landscape as possible.

While the opening four holes cover relatively flat land, the excitement builds on the 5th tee as the layout begins its journey across some of the best natural terrain for golf in Victoria. Cashmore, following a minimalist philosophy in creating the Beach course, located some fabulous tee and green sites among the dunes, which have, in turn, produced some memorable holes. The trio of holes, starting from the par-4 5th, is the highlight of the front nine while the back nine includes two world-class par-3s in the 12th and 16th holes.

The opening of the adjoining Creek course in 2004 turned Thirteenth Beach into a golf destination in its own right. Designed by Cashmore in collaboration with six-time major winner Sir Nick Faldo, the Creek Course is completely different to the Beach course with holes covering gently rolling terrain that was once used for grazing.

The landscape has a Melbourne Sandbelt feel, especially with the style of bunkering employed by Cashmore and Faldo to add bite to the Creek Course. The green complexes are superb with closely mown swales and hollows nestled alongside creative greenside bunkering that cuts the fringes of each putting surface. The dramatic slopes created off the edge of the bunkers add to the excitement of putting on the true rolling greens of the Creek course.

If you need any more reason to sample these two gems, here’s another – both courses are ranked within the Top-30 Public Access Courses in the country by Golf Australia magazine, with the Creek at No.27 and the Beach at No.7. Architects Neil Crafter and Paul Mogford have overseen subtle changes to the design as part of an ongoing development plan for the course. This has included bunker renovation and scrub clearing to further enhance the playability and visual appeal of the layout. These improving aspects, as well as the course’s immaculate conditioning under course superintendent Adam Lamb and his team, will no doubt keep Barwon Heads entrenched in the top percentile of this national ranking for some time to come.

Barwon Heads is the kind of course you enjoy more and more with every round you play as you begin to understand its nuances and realise how good the strategy of the design really is.

The layout, which measures a meagre 5,856 metres from the championship tees, continues to hold its own against the technological advances in golf equipment and remains as challenging today as it was when Victor East laid out his creation.

Most would describe Barwon Heads as a links course but the majority of the holes are more reminiscent of those found in the Melbourne Sandbelt. In truth it really is only the 3rd, 4th, 5th and 6th holes that really fit the links course billing. These holes, across a narrow road from the historical clubhouse, are brilliant, while the holes from the 7th (alongside the clubhouse) to the 18th are flanked by sometimes dense clumps of ti-tree and the occasional Cypress Pine.

The most memorable hole on the inward nine is also the shortest to be found at Barwon Heads. The 130-metre 13th is widely regarded as one the finest par-3s in Australia due to the simplicity of its design. The tee is perched high atop a sand dune and here you are totally exposed to the elements. On a still day the green can easily be reached with a short-iron but when the prevailing wind starts to roar, a fairway wood is needed to reach the putting surface below. Making par here should be easy – there are no bunkers, watery hazards and the ti-tree is some distance left of the green. But the combination of wind, elevation and poor club selection sees more bogies than birdies scored here. Heading east along the southern coast of the peninsula, there are three courses to be found within 20 minutes’ drive of Barwon Heads.

Ocean Grove Golf Club is a pretty nine-hole layout set on the east bank of the Barwon River. The manicured lush fairways and greens are a far more appealing view to the one that greeted back in days long gone when the property was a rubbish tip.

Improvements over the years at Lonsdale Golf Club have added to the overall strength of the Bellarine’s courses. Indeed, this layout is an absolute gem and will be even better when the latest round of course redesign is complete. The club is in a redevelopment phase after selling off some of its land closest to town and is now being played as a nine-hole course, while its new holes – created by the design team of Geoff Ogilvy, Mike Clayton, Mike Cocking and Ashley Mead (OCCM)– are constructed on adjoining land and beside Lake Victoria.

In the meantime, the course remains open and is well worth a visit.

At the eastern edge of the peninsula is Queenscliff Golf Club, which carries some of the highest security to be found entering any Australian golf club.

The course lies across land owned by the Department of Defence on Swan Island. All visitors to the course are asked where they are going, what they are doing and are told “no photographs,” which is a shame considering the quality of some of the holes on the course. The site has some gentle undulations across sandy terrain making it perfect for golf. Unfortunately, a cash injection is needed for Queenscliff to realise its full potential as a seriously good place to play. 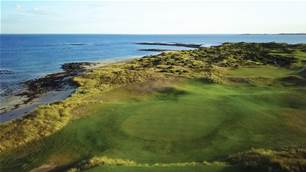