The evolution of one of Sydney’s best known courses continues and the transformation is stunning. Here, is an insight into the redesign of the layout from one of the men overseeing the project.

Bonnie Doon is one of the few courses built on the Sydney sandbelt running between the airport and the city and out to Rose Bay and Royal Sydney. Melbourne’s Sandbelt has more courses presumably because the land being further from the city was both much cheaper and more available in the 1920s but Sydney’s golf land had more of the natural advantages of sand and undulation.

Royal Melbourne and Peninsula aside, the landforms are more interesting in Sydney and, unlike Melbourne, the courses – The Australian, Royal Sydney, The Lakes and Bonnie Doon – are almost exclusively made on a deep bed of sand perfect for construction, drainage and playing the game.

Despite Bonnie Doon being on a really good property, ten years ago the course wasn’t ranked in the top 100 in the country. You can argue all you like about the veracity of the rankings but to have a course on a piece of land with so many natural advantages was disappointing. It wasn’t the condition of the course. Nor was it a hidden gem in the middle of nowhere unseen by the rankers.

Seeking a path forward the club interviewed architects and it was one of those cases when being honest either wins or loses you the job. We suggested it was amazing the course could be as poor as it was and make so little of its potential.

No one would suggest it was an inferior site to Kingston Heath, another course on a small piece of land but one making the most of its potential.

The final approach to the 18th green. PHOTO: Brendan James

It’s not the best course in Melbourne but it’s the model for any membership looking at how to improve their course. It’s not so much the holes but the brilliant use of the natural vegetation and the attention to the myriad of small details that make Kingston Heath one of the best two dozen in the world and elevates it above so many others around the country with the potential to be much better than they are.

Bonnie Doon was, and still is, split by a busy suburban road but that is no great disqualifier when you consider world class courses like Merion, Oakmont, Worplesdon, and Royal Melbourne have roads running through them.

What Bonnie Doon did have was spare land beyond the practice fairway and to the west of the old 2nd and 3rd holes. It was smothered in weeds and looked unpromising at first glance but it allowed for the building of the new par 5 14th and par 3 15th holes. Importantly it freed up land on the eastern (clubhouse) side of the course and the pocket of six holes ‘over the road’.

Five of the six holes on the southern paddock at Bonnie Doon ran close together in parallel lines heading either north or south. Only the par-3 16th went from east to west and the advantage of adding the new short 15th was the old 16th could be eliminated and the long hole along the western boundary extended to make a par-5. 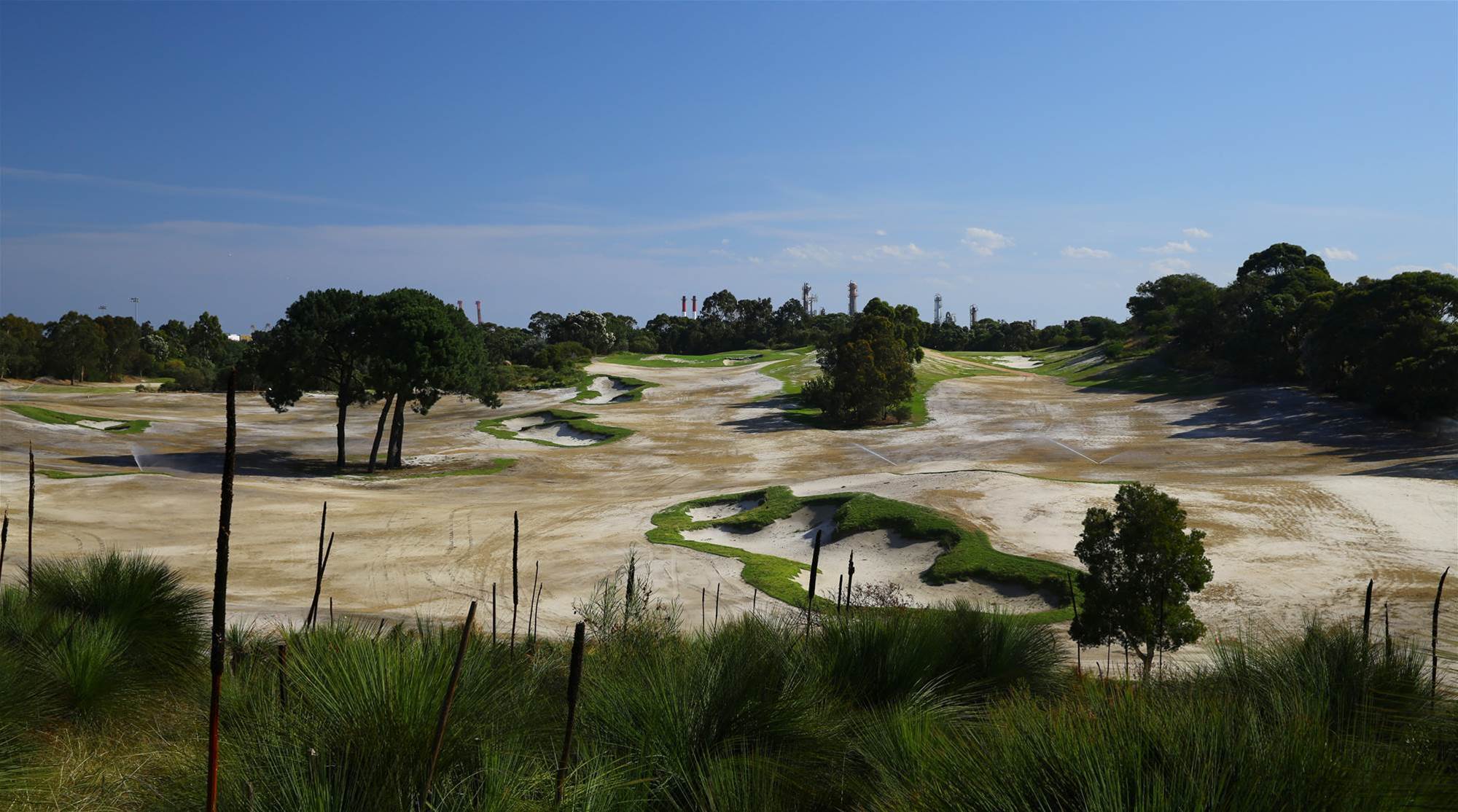 Final growing in stage of the southern paddock holes. PHOTO: Brendan James
We have never changed a course around as much as Bonnie Doon. At Royal Canberra, The Lakes and Lake Karrinyup the routings remained unchanged through significant rebuilding projects but at Bonnie Doon, we added the two new holes and the new 9th hole is the old 4th hole played in reverse. The old 9th and 16th holes were eliminated and the final stage includes making the 1st hole play from the steps of the clubhouse.

The ideal way to renovate or rebuilt a golf course is to do it nine holes at a time. It’s not a luxury available to all but Royal Canberra, Lake Karrinyup and The Lakes each closed a block of nine holes and rebuilt pretty much everything. The least efficient and the most frustrating path (especially for the members) is to pick at a course one hole at a time. It’s not hard to do the maths. It’s 18 years of the course, and the members being disrupted. Sometimes it’s the only way but it’s not the most efficient.

Three of the five new holes across the road, beginning at with the uphill par-4 3rd hole and followed by two more long par-4s make up the most difficult stretch of holes on the course. It’s perhaps unusual to have a run of hard holes so early in the round but they are only hard relative to the rest.

Bonnie Doon isn’t a particularly long course and there was no intention to make it a difficult course capable of holding a big professional event. However, it was intended to be a lot more interesting than the average course Geoff Ogilvy finds week-to-week on the PGA Tour. ‘Why’ he has often said ‘would you want to design a course for us. No one would want to play it.’

Some of the best holes are the quartet of short par-4s. The 8th, 12th, 16th and 17th holes are all drive and pitch holes, drivable even for the longest hitters, but they are dangerous if played recklessly.

As the short 4s are hopefully dangerous and fun to play so should the par-5s be thought provoking and tempting.

The long 7th is the final hole on the southern paddock and the long second to the green is uphill and demanding of a great shot to hit the green in two. Many times the most fun shots in golf are on the holes caught between pars – the short par-4s and the reachable par-5s. The most famous is the 13th at Augusta and we have watched for decades as players wrestled with the decision to play all the way to the green or to lay back and pitch across the Rae’s Creek. Of course the hole was a lot more fun to play and watch when the ball didn’t go as far and the decision was even more vexing. Whilst there isn’t any water to cross, the long second to the 7th is difficult but it’s hard to play safely when the green is within reach. Many times the wind will determine how the hole plays and when the 7th and the much shorter par-5 9th are into the wind the new 1st and 14th holes will play with the wind behind. It’s a coincidence but it works well and will keep the play and choices really interesting. Without length to defend itself, Bonnie Doon instead relies on sand and angles of approach. PHOTO: Brendan James

It’s been a long road for the members to this point and still three holes remain to be rebuilt but Bonnie Doon has a chance to be a terrific course. It is the details that will make the biggest difference now and ultimately determine how the worth of the course is measured.

The club has always had a great reputation, now the level is raised to a standard and class that meets an elite environment. The major course redevelopment will certainly maintain and attract new members, as well as other interest in Bonnie Doon.

Stage 3 of Bonnie Doon’s course redevelopment is on schedule to open on Saturday April 1, 2017; however this will be totally dependent on the weather over the next few months.

LOCATION: Banks Ave, Pagewood. The club is a 15-minute drive south of the Sydney CBD via either Anzac Parade or Southern Cross Drive. MEMBERSHIPS: Membership is currently open, with discounted joining fees and annual subscriptions for prospective members younger than 40. Contact the club for full details.

FUNCTIONS: The club is an ideal venue for conferences, weddings and other celebrations. The boardroom seats 12, the conference room seats 20 and the dining room can welcome up to 120 guests. Access to the golf course can also be included with use of these facilities.

CORPORATE GOLF: Bonnie Doon is a popular corporate golf venue, with options for fields of all sizes. 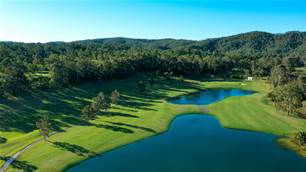